On the Verge takes staged reading on the road 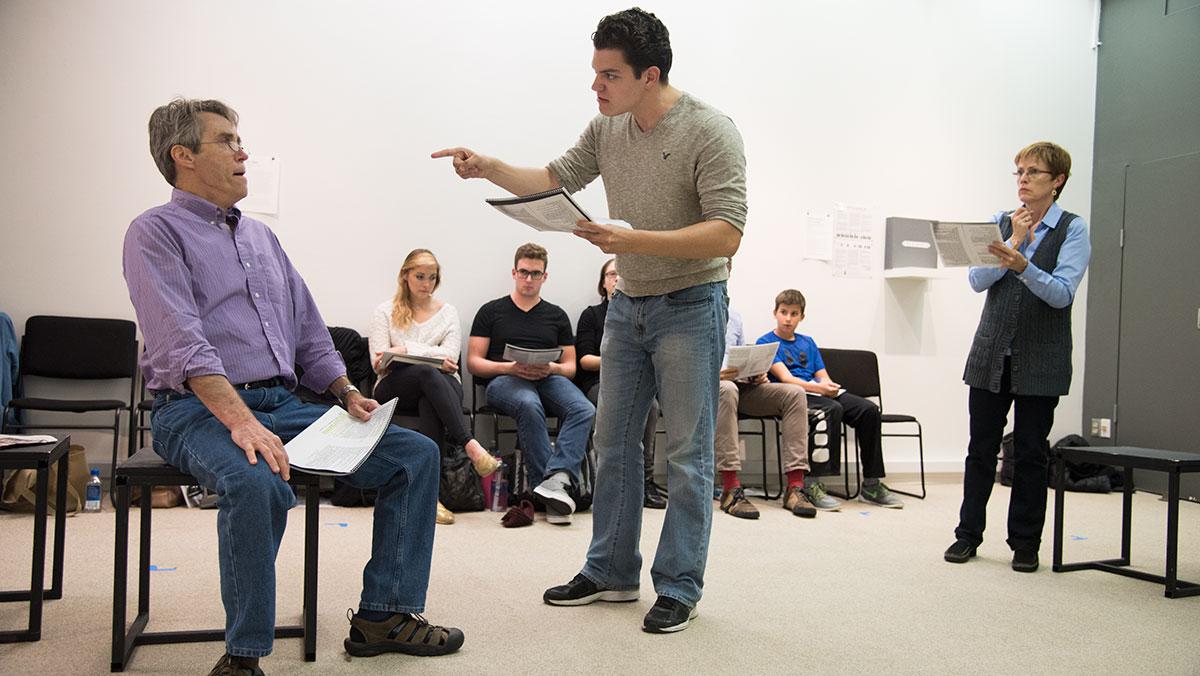 Three actors skim through their highlighted scripts as they prepare to perform together for the first time. They laugh and joke as they ease into their scene, but once they find their groove, they quickly transform into the emotional and honest characters of Arthur Miller’s “All My Sons.”

On the Verge, a staged reading performance group at Ithaca College, has been performing since 1993. The group is a collaboration between the college’s theater and English departments. One of the two pieces the group will perform this semester, Arthur Miller’s “All My Sons,” will be presented at 6 p.m. Oct. 8 at the Handwerker Gallery. The cast will then take its show on the road Oct. 18 to St. Francis College in Brooklyn, New York, as part of the Arthur Miller Centennial Conference.

Claire Gleitman, a professor in the college’s English department, is now On the Verge’s English sponsor, which means she selects which plays the group performs.

Gleitman said the classes she is currently teaching tend to guide the plays she selects for On the Verge, as she said she believes it is beneficial for students to see live productions of the plays they have read.

“When you take a dramatic literature class, you only have the text of the play, and plays are meant to be performed,” Gleitman said. “Any opportunity students have to see these plays on their feet really enriches our discussions, enriches students’ understanding, appreciation and liking of the texts.”

Gleitman was invited to speak at the centennial conference celebrating Miller’s 100th birthday by Stephen Marino, the event’s organizer, over a year ago. When Marino mentioned he wanted to have some actual performances at the event, Gleitman immediately suggested a performance by On the Verge.

After her pitch was accepted, Gleitman fit “All My Sons” into the syllabus of her Dangerous Women in Dramatic Literature class and announced an open audition to find a cast.

Casts of On the Verge productions include students, faculty and professional actors. Kathleen Mulligan, an associate professor in the Department of Theatre Arts, is On the Verge’s theater sponsor. She said she’s excited to have the opportunity to work on a play written by Miller, as it challenges the actors to bring their best work to the table.

“His plays don’t work well if an actor is kind of performing instead of really living within the situation. But given that, it’s just an actor’s dream,” Mulligan said. “The characters are so well written, so complex, so human. I just love doing his work.”

Along with Mulligan, senior Hailee Murphy, a theater studies major at the college, landed a role in the production. Murphy said working with On the Verge has been one of the best experiences she’s had so far at college due in part to the collaboration of the English and theater departments.

“By combining the literary complexities of shows … with the acting and staging complexities that the theater folks bring, we’re creating something that seemingly has no limits,” Murphy said.

Murphy’s castmate, sophomore acting major Justin Albinder, was also drawn to On the Verge after seeing professors and students work together in the group’s previous productions. He said he believes that although staged readings offer less time to craft a play than full productions do, they offer something special.

“A reading can still provoke the strong emotional responses that a full production can,” Albinder said. “We’re not looking for super perfection. We’re not going crazy with props or sets or costumes. We’re telling the story in its rawest form. That’s my favorite part.”

Following the casting, Mulligan and Gleitman went to work tackling the logistics of this special performance, such as transportation and sleeping accommodations for the group.

“It’s a little more complicated than usual because we’re bringing the production down to Brooklyn,” Mulligan said.

From deciding what to bring from their already rudimentary set, to blocking the show for a stage they have not even seen yet, Gleitman said the group has some decisions to make before making the journey.

Gleitman said she discovered they were given a time slot too short for the play, forcing the group to choose between performing without an intermission, or cutting the reading as much as possible.

“I actually noticed — to my horror — just about two weeks ago when I looked at the conference program that he had us slotted in for two hours,” she said. “I was thinking, ‘Am I just going to have to just cut this thing down to the bones?’”

The group will see the space for the first time the morning of its performance and have a quick rehearsal before it presents that afternoon. Gleitman said it’s unpredictable what kind of audience they’ll face, but she’s been told to expect at least a hundred people.

“I’m highly optimistic … and I’m also scared,” Gleitman said. “But I think we have a superb cast. I’m really happy with the students and faculty members who have agreed to do it.”