Orchestra to perform with famous pianists 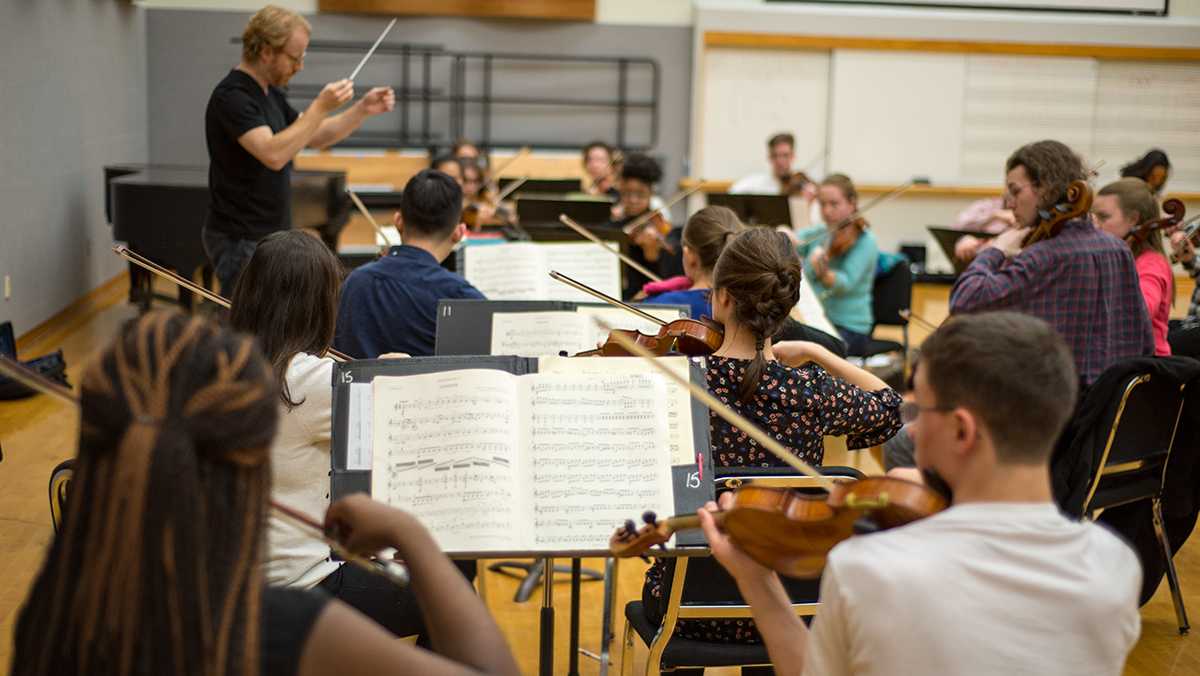 Fernando Ferraz/The Ithacan
The Ithaca College Chamber Orchestra is made up of 35 students, and will be joined by renowned pianists Gilbert Kalish and Miri Yampolsky for a performance Dec. 5.
By Mary Ford — Life & Culture Editor
Published: December 1, 2015

Typically, an orchestra is made up of 80 to 120 musicians. The Ithaca College Chamber Orchestra is about a third of that size, the smallest of the college’s four main orchestras and consisting of about 35 students who work together to create precise and beautiful music.

Two renowned pianists, Gilbert Kalish and Miri Yampolsky, will join the Chamber Orchestra for a special performance at 8:15 p.m. Dec. 5 in Ford Hall. Kalish is a world-famous pianist who continues to perform in his 80s and who has been nominated for three Grammy Awards during his career. Yampolsky is a senior lecturer of piano and chamber music at Cornell University. The duo will be featured in Mozart’s Concerto for Two Pianos in E-flat Major, and the orchestra will also perform pieces by Mendelssohn and Beethoven.

Jeffery Meyer, the college’s director of orchestras, said this semester the group has had a heavier focus on classical pieces, which was a challenge for its members.

“Very often we do programs that are quite varied. Every now and then it’s good to go back and clean house and do a purely classical program, which is really hard,” he said.

Junior Amy Chryst, a violin performance major and member of the Chamber Orchestra, agreed that a concert consisting of three sizable classical pieces is taxing for the performers, who have been rehearsing these pieces for about six weeks, about the same amount of time a professional orchestra has for pieces like this.

However, Meyer said the size of the group and the caliber of its members lends itself to that type of music better than any other in the college’s music school.

“This group contains the very top players in the School of Music,” he said. “It focuses on playing more challenging music that requires the kind of precision you can only really get in a group that small.”

Yampolsky has performed with the Ithaca College Symphony Orchestra and said her positive experiences working with the college led her to organize this concert, which she and Meyer have been planning for about a year. Additionally, she said she is excited to be playing not only with Ithaca College students again, but with Kalish, whom she describes as “one of her idols.”

“He’s really an 80-year-old superstar. He’s one of the best and well-known American pianists — pianists period, not just American,” she said. “I feel incredibly honored and humbled to work with him.”

Yampolsky, Kalish and Meyer also have personal connections that give this performance significance: Kalish first introduced Yampolsky and her husband many years ago. Kalish was Meyer’s professor when Meyer was working toward his doctorate degree.

“We both just adore him and love to work with him whenever we can,” Meyer said. “After working with Gil, I think you come away a better person. Like Miri says, he’s 80 and incredibly bright and incredibly active. He’s an inspiration to all of us.”

Chryst said working with professional musicians always raises the stakes for student musicians. She said she feels incredibly lucky to have the opportunity to play with Kalish and Yampolsky.

“They’re two of the greatest in the country, so it’s really exciting to be playing with them. When you play with such wonderful professionals, it really makes you rise to the occasion. It makes you a better player,” she said.

Meyer said musicians and nonmusicians alike should be able to enjoy the pieces, which he described as “sunny,” as Ithaca’s infamous winter begins to set in. Yampolsky added that in light of the many serious events occurring on campus this semester, such as the POC at IC protests and the no confidence votes against President Tom Rochon, she hopes the concert will bring happiness to the community. She said she hoped the concert would help to bring people together in unity and expressed her support for the movement.

“I know there are a lot of issues going on right now on campus, which are very important to many people,” she said. “I hope this [concert] gives the campus a moment of opportunity for people to relax … It’s not to say those issues should die down, but it’s always good to have a little music, too.”