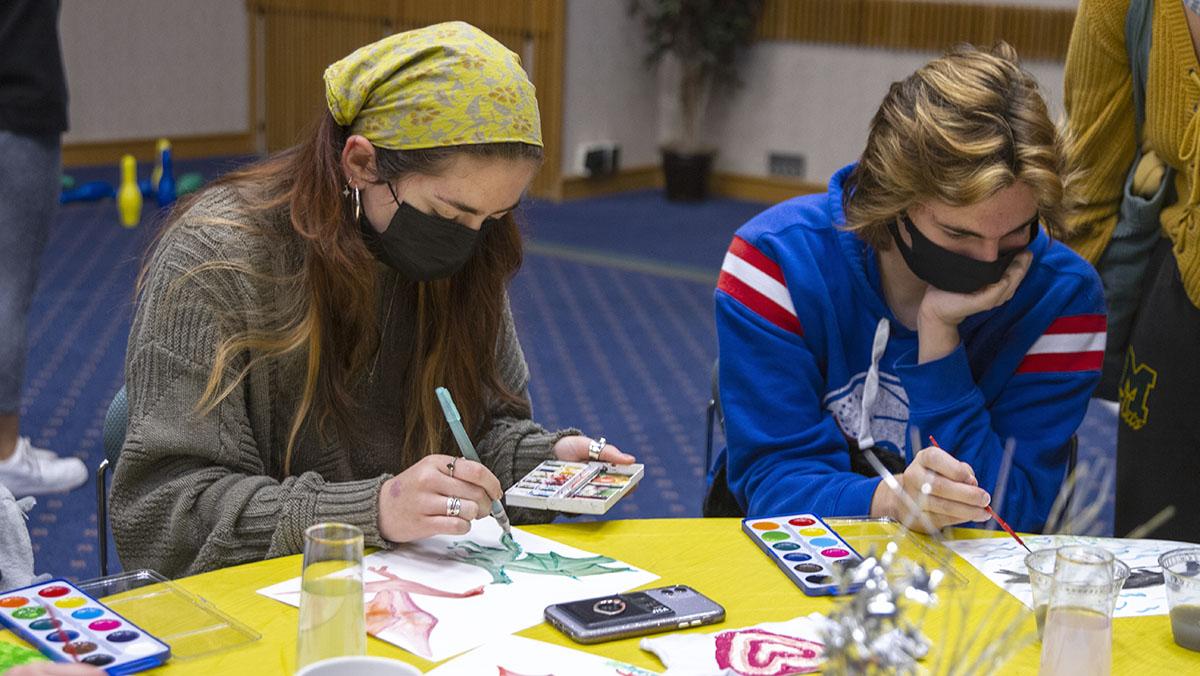 As students sit at a table in the back corner of the crowded Emerson Suites, an array of paint brushes, different paint colors and a blank canvas are on the table before them. With these few items and a choice of non-alcoholic beverage in hand, students were able to create works of art and immerse themselves in conversation with others around them.

On Nov. 12 in the Emerson Suites and IC Square, Ithaca College’s Paint & Sip club had its very first event in collaboration with the Residence Hall Association (RHA). IC After Dark, IC Esports, IC Graphic Novel Advisory Board and IC Tabletop also joined together to host an event called “RH-plAy.”

Paint–and–sip is an increasingly popular activity where people join together and paint while drinking wine and socializing with others around them. Typical events offered are professionally-led classes with a model image to replicate and alcoholic beverages offered. In 2014, it was reported that in the United States and Canada, there are an estimated 200 companies that offered paint-and-sip events.

Now, the college has its own official Paint & Sip club for any students to join and paint while sipping juice and meeting new people. Unlike traditional paint-and-sip classes aimed at adults who can drink legally, non-alcoholic alternatives are provided. The environment is much more chill and relaxed, and there are no set models or images to try to replicate. Students are instead able to paint whatever they would like without direction or guidance from an instructor.

Sophomore Annalese Winegard is the founder and president of the Paint & Sip club. Winegard said she decided to make it an official club after the initial Paint & Sip events during orientation week got positive reactions from students.

“I was an orientation leader this semester and we hosted one of the Paint & Sip events … it went really well,” Winegard said. “So I wanted to provide a space for people to do paint–and–sips more often than just whenever they’re randomly held.”

Winegard said she felt the recent RH-plAy event went well, with around 30 people joining the paint–and–sip tables. Going forward, the club hopes to host two events a month with different themes and decorations.

“[Painting is] a super de-stressing activity so if classes are overwhelming, you can come and paint with your friends,” Winegard said. “The colors and brush strokes can convey emotion and help people process what they’re feeling.”

Freshman Emily Wegener said she had attended a Paint & Sip event at the beginning of the semester during orientation and enjoyed it, finding it to be a very non-intimidating environment. So, she decided to return for the Nov. 12 event.

“It was interesting because a lot of the [other] events are based on just straight up a lot of socialization or athletic stuff,” Wegener said. “So it’s nice to meet people who also like creative activities.”

Sophomore Sophia Testani is the treasurer for the Paint & Sip club. Testani said students who are not artists are encouraged to join meetings.

“Paint & Sip is a fun and safe space for anyone of any painting ability to come and relax with friends,” Testani said. “Paint & Sip requires nothing of the students who are interested, except that you come wanting to have fun and with an open mind to get your creative juices flowing.”

Freshman Ariana Clark said she was never able to go to a Paint & Sip event during orientation, but had heard the environment was quaint with a nice atmosphere.

“I’m glad that they’ve been recognized as an official club,” Clark said. “Hopefully this will enable them to get more funding and find more ways to grow their events.”

Testani said that since becoming an official club, she hopes that over time more clubs will want to collaborate with Paint & Sip like the RHA did for the Nov. 12 event. The club plans to have more regular meetings next semester, which Winegard said will hopefully allow for the club to grow.

Having attended the RH-plAy event, Clark said she is interested in attending more Paint & Sip events in the future.

“Having a very just relaxed and chill environment is a great solace for the everyday stress of college,” Clark said. “Especially for freshmen who are new to this kind of pace.”