Performers dress up and dance at downtown bar’s Drag Night

Deafening cheers flood the country-themed bar as Veruka Dagger weaves her way through a captive audience. Onlookers clap and hold out dollar bills. The energy builds as Dagger jerks erratically before death-dropping. She sets an electric aura onto the audience before she leaves the stage, and the crowd whoops with delight. Veruka Dagger is the drag persona of House of Merlot performer, Ithaca College alum Joseph Simpson ’18.

The House of Merlot brings a diverse collective of drag performers to a local bar, The Range, every Thursday night. Drag houses, like the House of Merlot, are groups of performers who work together. These “Drag Nights” have been hosted at the bar since 2016, and students from the college have used them to explore the art form of drag — a theatrical performance in which a performer cross–dresses, lip-syncs and dances. 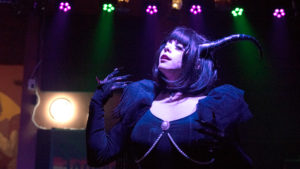 Simpson said he believes drag is a cathartic way to let go of social constrictions and that the House allows him to explore expression in a way that he can’t offstage. Drag Night at The Range brings in a lively crowd that mingles and engages throughout the show. Some are inspired to dance, melting into each other as performers set the tone.

“I would say that to me, drag means radical self-expression,” Simpson said. “I’m able to do stuff onstage that’s not appropriate during the daytime. There are really no boundaries, I feel. The drag I’m into isn’t always really pretty or safe drag. I think I do it because it gets such a strong response. I’ve brought weapons onstage. But instead of hurting others, I’ll tear up my clothes.”

Drag has an extensive history dating back to the 19th century. Because the practice has been predominantly pursued by the LGBTQ community, performing openly was a risk. Drag shows, or “balls,” were part of an underground culture, particularly in New York City in the ’80s. Balls became a haven for many queer performers and audience members because they were allowed to feel safe participating in the craft.

House Performer “Kale Green,” River Rushing, said that drag performances are always different because drag is not a singular, identifiable form of art.

“Drag cannot be confined to one specific thing,” Rushing said. “Drag is queer theater. Drag is exploring gender through art and theater. I feel like people compartmentalize drag as one thing, but it’s not. There’s so much more to drag that people think. Drag is whatever you want it to be. There are no rules.”

Simpson said drag at the House of Merlot is special to him because of its all-inclusive culture.

“They want to accommodate everybody,” Simpson said. “We’ve had performers who aren’t physically able to get onstage, so we clear the dance floor for them. 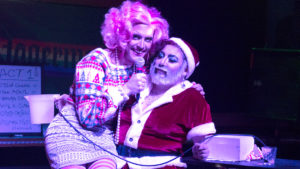 Dizzy DeSecretion and Kitana Scofflaw act together during their performance. (Connor Lange/The Ithacan)

They want to make everything a safe space.”

The House lineups change regularly, and the performers each have their own signature styles. Simpson said that the individuality resulting from this is why the House is important to him.

“I would say that the shows are messy,” Simpson said. “When I’ve been to other places, I see performers who are a bit too polished, so in my head, they all really blend into one. I feel some humanity loss there. With the House shows, I would say that there are unique characters there, and I’m able to distinguish who’s who.”

Downtown Ithaca does not host many queer-specific events, which makes Drag Night an important aspect of local LGBTQ culture. The events are 21+, meaning that most college students are denied entry. However, performers do not have to be 21+, so there is still opportunity for younger students to get involved.

Rushing said they believe Drag Night is helping to fulfill a need for queer spaces in Ithaca.

“I feel like drag is important to have in communities like Ithaca — communities that aren’t very urban,” Rushing said. “I feel like smaller towns need it, especially a town like here which is very queer. There are no gay bars, and the only consistently designated queer and drag spaces are held in Silky Jones and Drag Nights at The Range.”

Senior Rachel Kreidberg, Drag Night attendee, said that she was most surprised by the setting. The Range is a bar plastered with photos of old western icons such as Gene Autry, Billy The Kid and Buffalo Bill. Furnished with a chandelier made of antlers, along with moose-patterned light shades, the theme of the bar does not reflect what happens onstage.

“It’s like a group of Ithaca gays in the middle of Ithaca’s finest old men,” Kreidberg said. “You have all of these awesome, hyper-expressive kids, mostly from Cornell or Ithaca, who are just living it up and enjoying the space. It’s really cool. It’s a really great space to be in.”

Since the performers differ greatly from one another, Rushing said that a viewer must be prepared for a rollercoaster.

Carter Kohler ‘18, House performer “Dragon Phoenix,” said that Drag Nights can be a productive place to hang out for students, instead of going out to parties.

“It supports your local performers, and it is a safe space,” Kohler said. “There’s a lot going on. You can dance. You can get free popcorn. Get a drink. I think that it opens people’s minds a little bit. There’s drag stuff that happens on the campuses, but they’re few and far between. They’re big, but they’re not as frequent.”

Kohler said they believe drag shows can be entertaining for all who go because it’s always evolving.

“I think that drag is a very unique thing to do,” Kohler said. “It’s such a combination of a bunch of different things kinda squashed together and made really gay. Shows are always fun. They’re fun for whoever. You can’t not have a good time at a drag show. It’s just a nice space and a supportive atmosphere. People go to cheer on their friends and to be a part of a community.”

Fall Creek neighbors and students band together at Porchfest