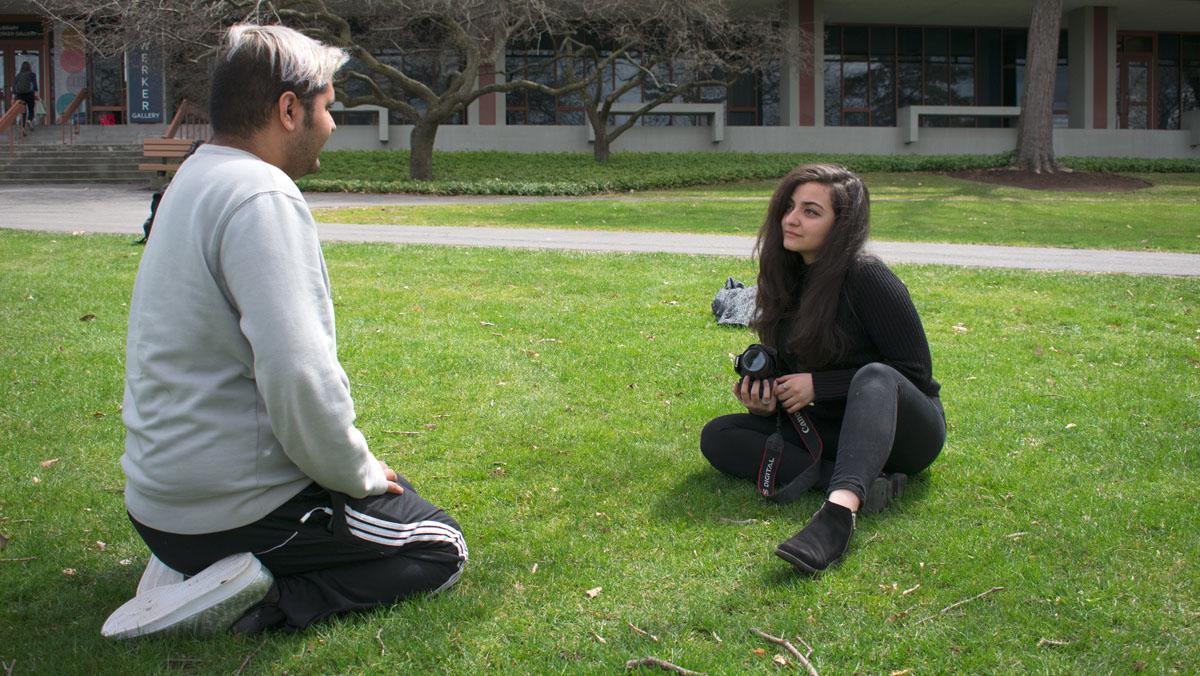 Junior Alisar Awwad and sophomore Erin Lockett sat in Taco Bell, eating a mid-afternoon snack. Between bites, Lockett shared a bit about herself to Awwad, who listened from behind her burrito. Awwad snapped pictures of Lockett enjoying her food as she told her that Taco Bell was where she felt most beautiful.

Awwad was not only capturing Lockett feeling beautiful as she enjoyed her snack, but also listening to Lockett’s story about how she struggled to feel beautiful as a woman of color in an acting class she took that was mostly full of white students.

This moment was the beginning of Awwad’s online photo campaign called #beautifullyme  that challenges Eurocentric and hegemonic beauty standards. Lockett’s story of what she believes beauty to be is one of 10 that have been posted onto Awwad’s Facebook and Instagram pages. The goal of the project is to shine a light on people who do not fit into culturally accepted beauty standards — people who aren’t skinny with light skin and straight hair, Awwad said. Awwad has taken photos of 15 people so far and has more photoshoots scheduled.

“I’m surrounded by a lot of beautiful people, and I often see that they are comparing themselves to people in media or people on this campus, which doesn’t have that much representation,” Awwad said. “I just wanted to get their stories out and also remind them that they are beautiful.”

She began her photo campaign in early February by borrowing her friend’s camera and taking pictures of the people who live near her. After the first round of photos was released on social media, people began reaching out to her and asking if they could participate, she said. Through unedited photos and anecdotes shared during the photo shoots, Awwad compiled what makes participants feel beautiful and what beauty means to them, highlighting the experiences of people of color on campus.

Studies have found that women of color often internalize hatred for their unique beauty because they often only see beautiful women represented as having European features. One study titled “Beauty and Body Image Concerns Among African American College Women” explored body image concerns among African-American students on college campuses. The study discusses how the pressure to fit into hegemonic beauty standards leads women of color to go to extremes to have straight, flat and silky hair. In the study, one woman said, “I know girls, not me, but I know Black women, who spend hundreds of dollars on hair and getting their hair done you know and putting that before they’ll put that before they eat.”

Junior Sara Gutierrez said that she reached out to Awwad after she saw Awwad’s profile picture on Facebook, in which she is wearing a shirt with a message about how European beauty features are idolized. Gutierrez said that she reached out because she thought it was important that Awwad was creating a platform for people of color on campus to speak about beauty, and she wanted to get involved. Awwad met Gutierrez in her house on a cold day, and they chatted over tea for more than two hours. Gutierrez said Awwad made her feel comfortable talking about what it was like growing up Hispanic by meeting her in a place where she felt beautiful and by having an open conversation.

“She was so honest with the project, and she was saying she wasn’t a photographer …  and she wasn’t going to edit these photos because ‘I want to take pictures of you’ — that made me feel even more comfortable,” Gutierrez said.

She said it was amazing to be able to open up to a stranger about the aspects of her identity that made her feel insecure. She said the project helped her embrace what made her different.

In Gutierrez’s post, she said she used to feel insecure about her thick body type and dark body hair. Now, she has learned to accept her insecurities.

“I used to sit in the back of the class, because I feel everyone was looking at me, and staring at me because I was hairy and had a mustache and a unibrow and just had a hairy body,” she said in her post. “Now I embrace it.”

Awwad said she begins each shoot without her camera. She meets participants wherever they say they feel most beautiful and gets to know them. Lockett wanted to meet in Taco Bell, but others have asked to meet in their bedrooms or even outside naked, Awwad said.

As they become more comfortable, she uses her camera to snap pictures. Awwad asks questions regarding beauty while capturing the interviewees on camera, she said.

“The emotions that are captured, if any, are all authentic and real because it’s happening in the moment,” she said. “I don’t go in with a set of questions — I just want to have a conversation.”

Sophomore Jelani Williams, a good friend of Awwad and participant in the #beautifullyme campaign, said he wanted to participate because he has seen the internalized prejudice against darker skin colors and non-European features in society and at Ithaca College. He said this project gave him a platform to share his story as a black man and allowed him to represent other people of color who may have similar stories.

“I had the chance to represent their feelings through my own,” Williams said.

In his post, Williams said that when he was living in Jamaica, he often felt insecure about his dark complexion because women always spoke about light-skinned men. To try to feel more attractive, he said, he used to scrub his face with cornmeal, lime juice and bleach to lighten his complexion. Looking back on this experience, he said he now thinks differently.

“I think being a beautiful black man means loving all the African features we were taught to hate, both in ourselves as black men and more importantly in the black women who we often make feel so unloved for not appreciating their beautiful skin tones, hair textures and diverse body types,” he said.

Williams said that seeing other people’s stories posted on Awwad’s social media showed him and others that everyone has insecurities. Seeing these people be vocal, vulnerable and open about their insecurities made him realize that everyone walks around with baggage, he said.