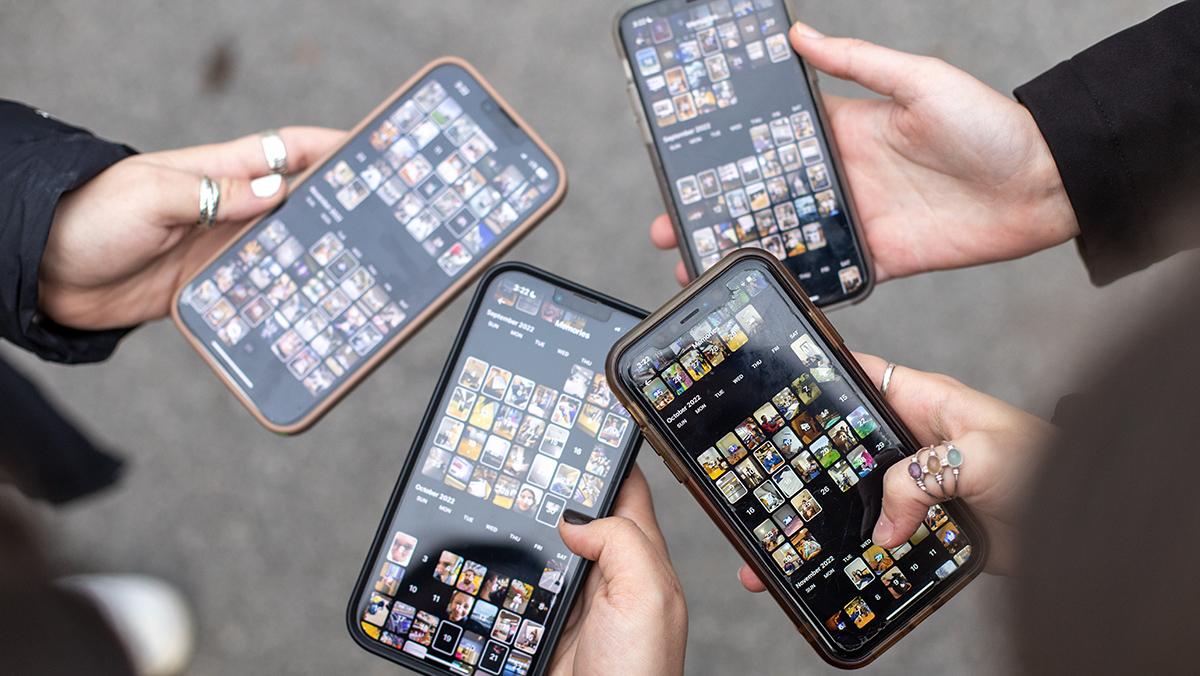 Photo illustration by Nolan Saunders
Students across campus receive an alert once a day from the app BeReal on their phones, where they are prompted to post a photo for campus members to see.
By Victoria Kellogg — Contributing Writer
Published: November 30, 2022

At a random moment every day, a phone notification goes off, alerting individuals to “be real.” Within the span of two minutes, users are expected to take a photo that captures a picture using both the front and back camera at the same time.

The app is designed to offer users an outlet to show off a real version of themselves and their friends. Created by French entrepreneurs Alexis Barreyat and Kevin Perreau in 2020, the BeReal app has taken off globally with over 20 million active users. In August 2022, the app rose to the No. 1 spot on the Apple App Store for free apps.

Yvette Sterbenk, associate professor in the Department of Strategic Communication, said social media has been essential in giving Generation Z an outlet to talk about issues where older generations have not been able to as easily. Sterbenk also said her biggest concern has been how addicting social media can be.

“I think that we are all addicted to social media,” Sterbenk said. “In particular, I think especially younger adults and those in their early teens do not have the coping mechanism to use social media in a form of entertainment and not as a necessity. I do worry it can affect people’s abilities to just be.”

There is a correlation between students and their dependency on social media. According to Forbes, the most used social media outlets are Snapchat and Instagram. On average, members of Gen Z spend around 50 minutes a day on Snapchat and 53 on Instagram.

Sterbenk said she joined BeReal in Spring 2022 with her students because she was teaching a social media class. It was not a part of her curriculum to join BeReal, but she encourages her students to test out new social media platforms.

“The students I see use it, for the most part, to be real,” Sterbenk said. “To stop and take a moment and honestly show where they are. That can be lying in bed watching TV or cooking dinner. I’m sure there are people out there curating their BeReal, though.”

The app gained its popularity going against social media norms by emphasizing capturing random moments in one’s life. Instagram users are often encouraged to edit and prepare photos as part of a strategy to create curated social media content. In contrast, BeReal emphasizes on-the-go, everyday lifestyle content. Under the slogan “Your Friends For Real,” the company promotes authenticity by encouraging users to share their day-to-day lives.

BeReal has also taken off among Ithaca College students. First-year student Sophia Renaud said she is consistent with her BeReals. Renaud said she enjoys scrolling through her feed to see what her friends are up to, especially when it is time to head home for break and she misses her friends from college.

“I like doing my BeReal when I am around my friends,” Renaud said. “It’s fun to have them take my BeReal. The one part I don’t like about BeReal is not knowing when it will go off, especially if it goes off super late at night.”

Senior Lauren Schmit said she was introduced to the app after a member of the BeReal team reached out to her and the Ithaca College Tap Club in Fall 2022 in order to further promote the app. Members of the club were asked to reach out to friends and family to encourage them to join BeReal. For each new user the team was able to recruit to the app, Schmit said the club would receive money.

From mid-August to November 2022, BeReal’s College Team reached out to students in colleges across the country in order to recruit them to help create a stronger presence among young users. Under the partnership, students were expected to represent the BeReal brand and identify moments for the BeReal team to further get involved on campus.

“It’s really cool to have things like BeReal kind of reaching out to smaller clubs,” Schmit said. “It was nice that [the app is] not just looking at the big company groups. … They were looking at groups that are maybe not as common throughout colleges and universities.”

While the club is no longer using the app to fundraise, Schmit said she continues to use the app personally and she finds that it is easier to be more authentic on the app than on other apps like Instagram.

“I do find it actually kind of fun because, I mean, the whole thing is [that] you’re being real within those two minutes, obviously, as [the notification] pops up,” Schmit said. “Like, you’re seeing people in that moment, rather than taking five hours to make an Instagram post that’s perfect with the perfect caption.”

However, as the app grew in popularity, the more staged “the realness” became. TikToks were even made by influencers like Tommy Schoenith and Greg Johnstone to show the extremes people who use the app go through to make sure they are getting the perfect shot.

While some embrace the spontaneity the app offers, others choose to take photos at their own pace. Sophomore Ben Rymer said he waits for something funny or interesting to happen throughout the day before snapping his BeReal.

“A lot of it is people who are laying in bed when people post right on time. … It’s just people doing nothing,” Rymer said.

Sophomore Thomas Magee said the title of the app says it all and intends for users to take the picture as soon as the notification goes off. But Magee said he finds himself waiting to take his picture when he gets to a certain venue.

“This is not doing what the app is intended to do,” Magee said. “That is the part of … questioning why I have this app right now.”

Sophomore Birdie Sink similarly said she does not post daily. Instead, she said she often finds herself waiting to capture more interesting moments.

“I think it’s interesting that it was designed to be … candid,” Sink said. “Like, the point is [that] it shouldn’t be like other social media. It should be like, ‘This is real.’ But then … I don’t post every day. I don’t post if I’m not doing something interesting, so it’s kind of like I do it in a way that kind of defeats the purpose of the app.”

Rymer said he thinks that the app could have negative effects on users’ well-being depending on how seriously they take posting content. Rymer said he does not seriously post content on the app.

“I can assume it is detrimental because if you aren’t doing something interesting and you see your friends are on the app, it can have an effect,” Rymer said.

The effects of social media on youth vary depending on how it is used. According to the American Psychological Association, 1 in 3 teenage girls who use Instagram reported experiencing increased body image concerns. A 2018 study by the Pew Research Center revealed that 59% of U.S. teens on social media platforms have been the victims of cyberbullying.

Schmit said she hopes BeReal will be able to change the way people view social media and that there will be a shift toward being more authentic online.

“I am hoping that platforms like BeReal will continue and take over the picture-perfect Instagram,” Schmit said. “You can see on Instagram people’s lives and you think it’s so perfect, and it’s kind of, like, a lot of that can be fake. I think for mental health reasons, [it] can also be really refreshing and helpful because it’s like you’re not constantly seeing people who look like the most perfect person in the world.”

Victoria Kellogg can be reached at vkellogg@ithaca.edu