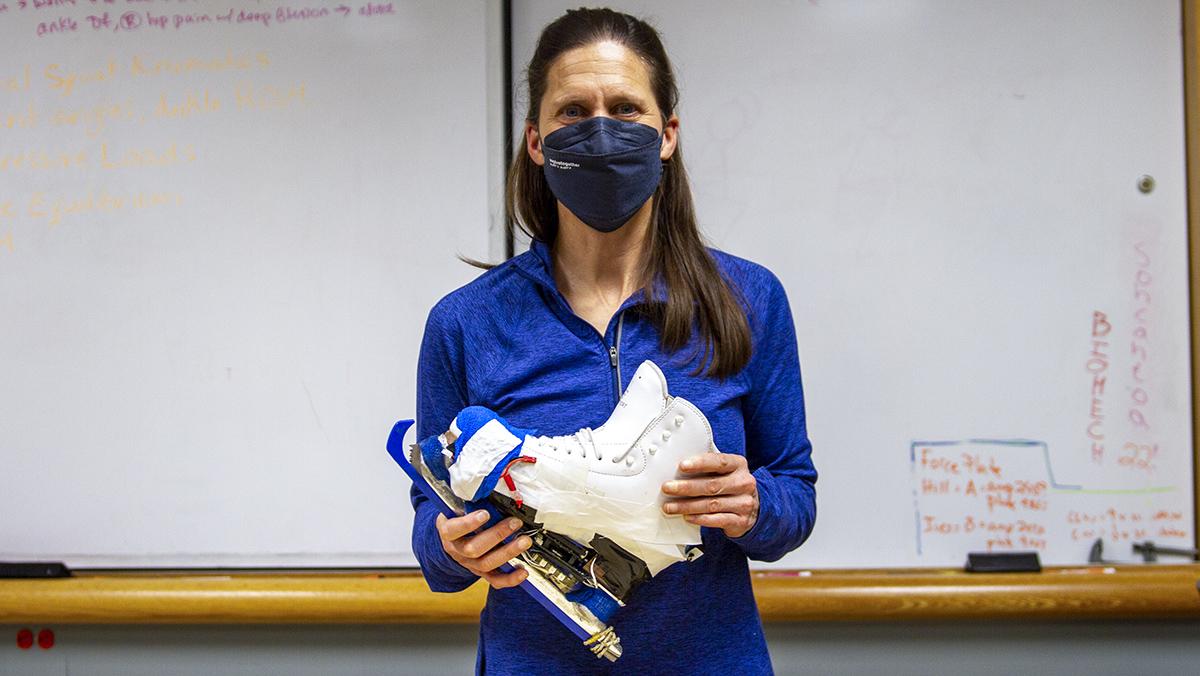 Deborah King, professor and graduate program chair of the Department of Exercise Science and Athletic Training, recently had the opportunity to meet with Jonathan Van Ness, most commonly known from the Netflix series “Queer Eye: More Than a Makeover,” on their podcast, “Getting Curious with Jonathan Van Ness.” The podcast episode, titled “Can Figure Skaters Defy Gravity? with Dr. Deborah King” released Jan. 12.

King’s area of expertise is in biomechanics of human movement and sports performance.

EK: Could you give an explanation of what biomechanics is?

DK: It’s studying the mechanics of a living system. I look at the mechanics like forces and movement of the human body. It could be sporting events like figure skating, but also mechanics would cover walking, balance, and posture. You can think of strength and conditioning and lifting. It’s functional activities as well as athletes and sports skills.

EK: How did studying biomechanics bring you to figure skating?DK: It was not necessarily an intentional route but it worked out really well. Around the end of my masters degree, I hadn’t really decided what I wanted to do, and I think my advisor knew that … so they asked if I was interested in a research assistant position at the Olympic Training Center in Colorado Springs. They used to have positions where they would bring in masters or PhD students into the Sport Science and Technology program where they also had staff but also brought in the graduate students … you provide sport science services to either the athletes who are in residence at the training center or teams that would come through for training camps. Our job … was to provide video services for them. We would go out there and videotape all their skills and then we’d give that back to the coaches … There was a coach there who wanted to do a research project on the triple axel because this was a time when, particularly for men’s single skating, the triple axel was like the element that was breaking out. … to medal at the next Olympics, you really needed to have a good triple axel, and there weren’t that many men who were doing them yet. We had five skaters at the camp, which isn’t a lot, who were doing triple axels or learning how to do that.

EK: As the chair of exercise science and athletic training, how often are you practicing or teaching biomechanics?

DK: Not as often as I would like to be. Most of the research projects I’m doing now are in the lab, so I haven’t been on the ice rink in several years. Before COVID, … we were working on that figure skating boot [with a computer chip in it] … I had been out to the ice rink in Lansing primarily with a skater from Cornell because the boot fit her, but we had been working with skaters from the Ithaca College skating club and the Cornell skating clubs. … I do have a grad student right now and I know she wants to do some work with figure skating so I need to get someone to do some repairs on the boot and maybe she can pick that up, but we have some other ideas as well.

EK: How did you come about the opportunity to meet with Jonathan Van Ness and have this interview with them?

EK: What was your experience like meeting with Jonathan?

DK: It was hilarious. Actually, they came to campus at one point, which was pretty cool, and they talked to me. We did some filming in the lab where I work and then after that they contacted me to see if I could do a podcast with them, so we did that over Zoom. He’s just really enthusiastic and interesting and fun, we just had a wonderful time talking to each other.