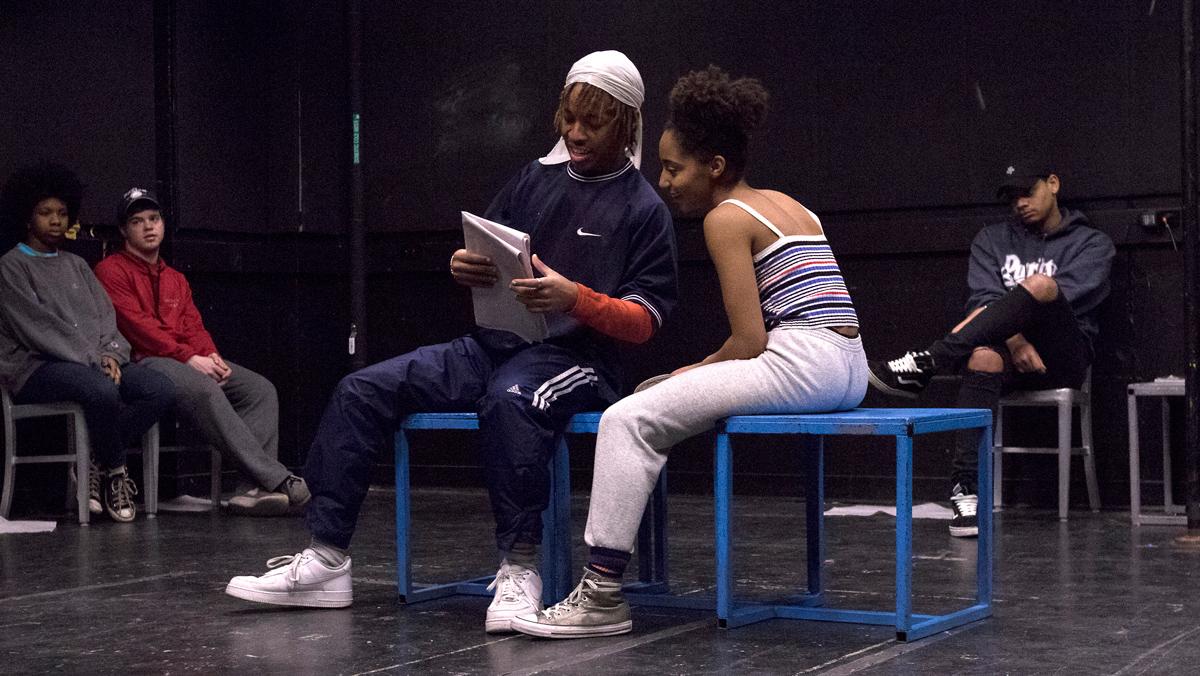 Catie Ihrig/The Ithacan
Sophomores Kellik Dawson, playing the role of Dani, and Erin Lockett, playing the role of Lala, rehearse a scene from the show "K-I-S-S-I-N-G." The show will run from Feb. 23 to March 3.
By Adriana Darcy — Contributing Writer
Published: February 21, 2018

Dani, a wealthy teenager, takes Lala to a big art museum where she has never been. Dani has been there many times and sees the subject matter of the classic paintings to be problematic. Lala is amazed at the largeness and skill of the art. Dani is helping Lala to realize that she is an artist.

“K-I-S-S-I-N-G” is a play written by Ithaca College alum and playwright Lenelle Moïse ‘02. It follows a group of teenagers trying to figure themselves out. Lala is described as the “around-the-way girl.” She meets and falls in love with the smart and wealthy Dani, and the pair spends the entire summer together. Lala then starts to wonder why Dani has not yet kissed her.

“I am just so happy to unpack the play with this particular collection of artists,” Robinson said. “There is so much of this work that is new to me and so much that is familiar is well.”

Moϊse will be a playwright-in-residence at the college this semester, working with students and faculty to put on the show. The show is meant to be a tender, sweet and funny coming-of-age and falling-in-love story.

“As a playwright, I aim to have anti-racist and feminist conversations in the theater that fuel collective responsibility and enthusiasm,” Moϊse said.

The theater department wanted to perform a show by a female playwright of color, and Moïse was nominated and chosen by the selection committee. Moïse’s plays have anti-racist and feminist themes that are influenced by her identity.

“I celebrate being a queer black woman,” Moïse said. “We need to move beyond fear, guilt and silence into a space of inquiry, truth-telling, respect and joy.”

The production that was originally planned for this season was “Skeleton Crew” by Dominique Morisseau. However, the show was changed to “K-I-S-S-I-N-G” in early Fall 2017, after the group lost the rights to a professional theater group who was performing within a couple of miles of the college.

Sophomore Kellik Dawson portrays Dani Fouquois in the show. Their character is the love interest of Lala, played by sophomore Erin Lockett, and a fraternal twin. Dani is the smarter twin, whereas his brother is the more artistic one.

Dawson said being in the show has been an interesting experience because it explores blackness and sexuality that they said they do not typically see in plays.

“I get to see how my character specifically is queered, he could be seen as a queered character, even though he is heteromantic,” Dawson said.

Dawson said “K-I-S-S-I-N-G” represented both race and sexuality while giving light to orientations that are not typically represented in media.

They described the show as “three young adults, all trying to understand what their position is as sexual beings, as black people and as people living under a white lens without wanting to be defined by that white lens.”

“I have never seen a black asexual character, and it’s very often that black people in media are very sexualized,” Dawson said. “I think it’s a good place for us to start talking about when we don’t want to be sexual, or the different types of sexuality.”

Sophomore Harrison Krebs is the manager of the production, alongside sophomore Emma Dumont. As the studio managers in the Earl McCarroll Studio Theater, Krebs and Dumont handle the ticketing, publicity, marketing and social media for the show.

Krebs described the experience as eye-opening and challenging but said it was a great learning experience.

“Stuff happens and you just got to get back up and keep going ’cause the whole process of this is about a month, a little less, so you do not have time to sit back and complain,” Krebs said.

The show is made up of student designers, student managers and dramaturges but is directed by a faculty member. Faculty-directed shows typically receive a slightly larger budget than the student-directed shows but do not have as high of a budget as main–stage shows.