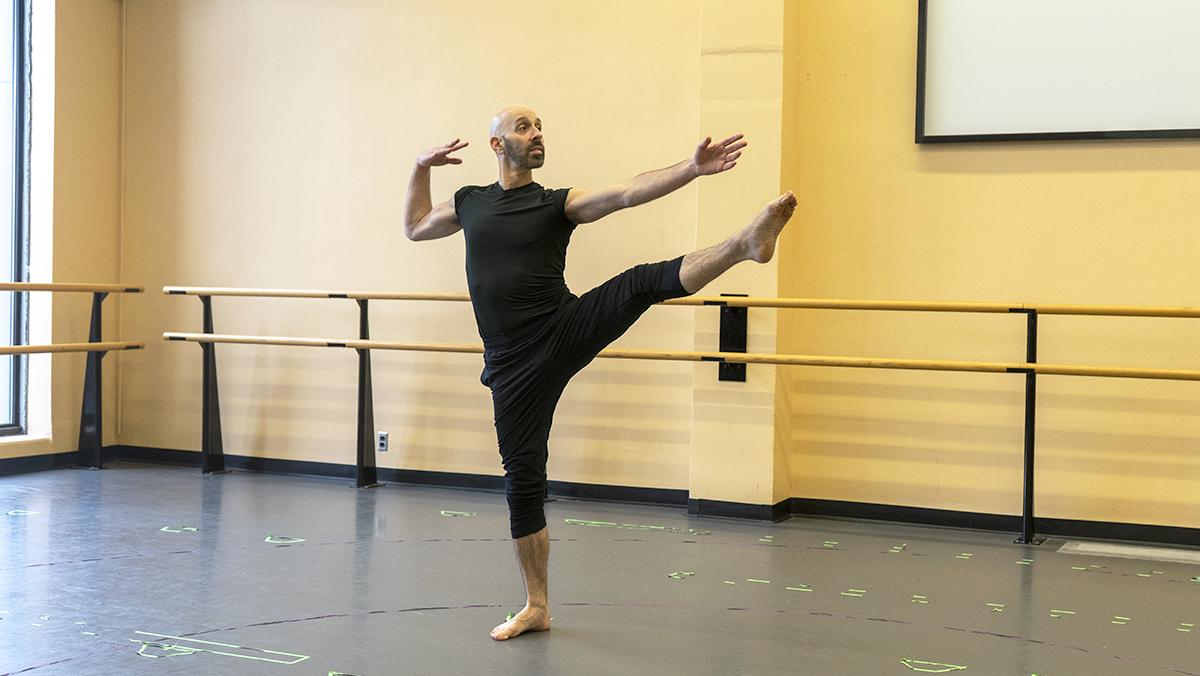 Daniel Gwirtzman, assistant professor in the Ithaca College Department of Theatre and Dance Performance, has worked on creating accessible dance content for students for upward of two decades.

Gwirtzman does this through teaching dance in underserved schools in New York City and making Dance With Us, a free online platform to view dozens of dance films and instructional videos. His newest venture, a dance film titled “Charged,” made its premiere at the Thessaloniki Cinedance International Film Festival on Sept. 25 in Thessaloniki, Greece. The film explores the life of a woman who teeters between mundane daily tasks and escapism from routine.

Patrick Mazzella: Can you tell me a little bit about the film?

Daniel Gwirtzman: The film was commissioned by [The Flatlands Dance Theatre], which had a season of filmed dance work during the pandemic. What was noteworthy about this process was I never physically met or worked with the dancer. I had a long process of rehearsing over several months and it was all choreographed through Zoom. I was very much interested in using an interior space that could be transformed in some way and settled on an available space for the dancer, which was the dancer’s kitchen and really wanted, then, to make it more like an open set.

PM: “Charged” is a pretty intense title—what was the inspiration for it?

DG: This idea of “Charged” came from starting with the idea of coffee and caffeine and what that can do to somebody and really blowing that out and exploring a character that becomes unhinged or perhaps seems unhinged to a viewer. … There was a director of photography and during the actual shooting, I was also there to help set up the angles, and we had multiple cameras shooting, which I then edited into the final film. … So it was a highly collaborative project.

PM: Obviously “Charged” was such a different experience for you, but what is your typical process for choreographing a dance? For camera or otherwise.

DG: For this bi annual dance concert being held by [the college] this fall, auditions were open to the entire campus community. I have a cast of nine dancers and am collaborating with [the college]’s Jazz Ensemble. … So when I’m choreographing, I want to highlight the cast and accentuate their particular idiosyncrasies. At the same time, I’m going to challenge everyone technically and artistically through expression … which is really meaningful for students, sure, but dancers to be a part of that creation. So I’d say that characterizes my approach to choreo: it’s to stay true to a stylistic voice that I developed through these decades and also leaving space in that structure to be filled by the specific individuals that will be interpreting and performing. Something new comes from that, of course, and it allows for the work to be genuine in a way that everybody can buy into.

PM: You mentioned the digital sphere earlier. Can you tell me how the introduction of a more digital environment has sort of transformed that?

DG: Since our inception, we [have been] producing video tutorials and lesson plans and documenting choreo[graphy] that we could use in partnership with our education partners, such as the Department of Education. So we received grants early on in the company[‘s] existence to produce these materials that could help augment hands-on instruction by thinking of underserved populations. Just before the pandemic, the company received a significant grant from the Rockefeller Brothers Fund to create a digital platform called Dance With Us and we did launch the platform during the pandemic. … This is a free platform … so it really is connected to a philosophy … that dance can be accessible, not only in its content [but] in the dissemination of it and the access to it.

PM: What was the process of developing that platform at the beginning of the pandemic?

DG: So it’s called Dance With Us. It’s more than the YouTube channel; we’ve shifted to this new platform which has a ton of content and, unlike a lot of what’s on the YouTube platform, which are documented dances, the heart of Dance With Us is a catalog of dance films. … In fact, we were one of the first companies in [August 2020] where we had a residency upstate with dancers from New York City, augmented by [the college’s] alums and even some current students at the time. … It’s been really gratifying to capitalize on the digital space without feeling there’s any compromise … because they’re two different genres with two different media. … You can see it in the growth of TikTok. … Because of the pandemic, a lot of professional creators that were laid off started to get into TikTok and using it as a forum to stay fluent in their bodies, and so along with the rise of dance shows on TV … that’s been happening for a while. … So the pandemic really was a silver lining for the distribution and consumption of dance.

PM: Can you speak a bit about how students and others interested in dance can view “Charged?”

DG: When a film is on a festival circuit, it’s part of the contract that the film is exclusive for that time. But as the film passes from that statute of time, we’ll be sharing it widely and freely. So the Dance With Us platform has a lot of dance films, some of which have screened at festivals and will continue to, so there’s already an opportunity to engage with dance films through that site. And yes, we’ll make sure “Charged” will be available for students to be able to see a dance film in that way. Also exciting in the way we’re able to share from another continent.