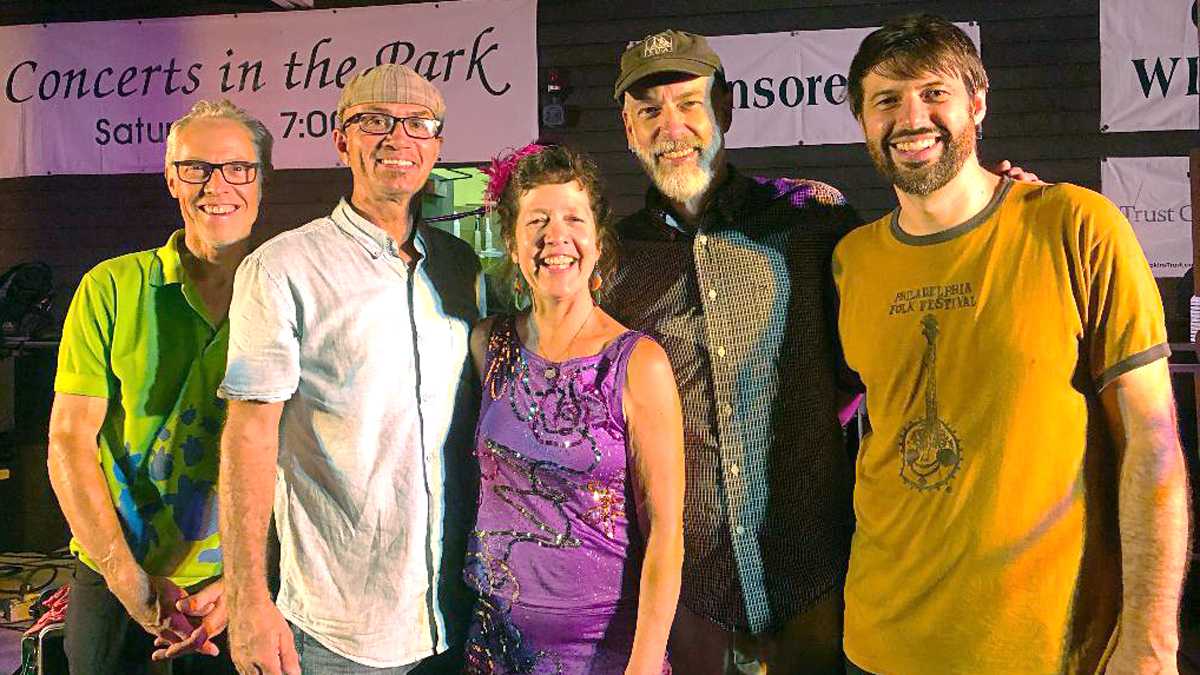 While not teaching, Anne Stork, assistant professor in the Department of Environmental Studies and Science at Ithaca College, can be found performing with her zydeco group Li’l Anne and Hot Cayenne on stages around the country.

Stork is the lead singer and accordion player of Li’l Anne and Hot Cayenne. Stork chose the band’s name as a tribute to her nickname, Li’l Anne, which she received from a bass player at a band camp in the Catskills. Stork has been playing in the zydeco-style band for 18 years. This Louisianan genre first originated with French Creole speakers and was later infused with blues by artist Clifton Chenier.

Stork said she first felt a calling to play the accordion after seeing Louisiana musician Keith Frank perform at the Finger Lakes GrassRoots Festival of Music and Dance in the 1990s.

“It was like a lightning bolt struck me, and that was it,” Stork said. “I was obsessed. A little voice kept saying for a few years, ‘Play the accordion.’”

The GrassRoots festival was also where Stork discovered the genre of zydeco music. Shortly after the festival, Stork listened to cassettes of accordion music on her way to work and practiced with a private teacher.

“My first accordion lesson I had to wait six weeks for, and I had to drive two and a half hours,” she said. “At the time, … I said, ‘Look, I’m not a musician. I really love to dance, and I love the music, but I’m not going to really ever get this. [My teacher] looked at me, and she said, ‘Don’t put yourself in a box.’ … I told my students this story two weeks ago because we were starting [Microsoft] Excel and students said, ‘I’ll never be able to do this,’ … and I stopped and told [this] story.”

Currently, Li’l Anne and Hot Cayenne includes guitarist Peter Glanville ’98, bassist Paul Crowley, drummer Bill King, and Gordon Rowland, Stork’s husband and the director of the Center for Faculty Excellence at the college plays the tenor saxophone and scrub board.

“There’s been a lot of different bandmates over the years,” Stork said. “We’ve always had a wonderful band, but right now my band is exceptional.”

Since Li’l Anne and Hot Cayenne’s start in 2002, the band has performed all over the East Coast, including venues on Rhode Island and in Pennsylvania, Connecticut, Delaware and as far south as Louisiana. However, Stork said she enjoys playing around Ithaca, especially when she sees her students’ faces in the audience.

“Last spring, our band played at a Bob Marley birthday party tribute,” Stork said. “A lot of my students came. I would say like eight Ithaca College students came. It was just super fun.”

The band also played at the Strawberry Park Cajun Zydeco Festival in Preston, Connecticut, in 2007, and the Rhythm & Roots Festival in Charlestown, Rhode Island, in 2017. Crowley and Glanville said these festivals are their favorite to play because of the exposure they have had to other musicians.

“Because Li’l Anne had a lot of festival and regional appearances, there’s quite a bit of travel I really benefited from,” Crowley said. “Exposure to other musicians from across the country was really beneficial.”

Stork said her career at the college helped create music-related connections with fellow faculty members. For the past 14 years, Stork has been studying with Carol McAmis, professor of Music Performance in the Department of Music. McAmis taught a voice pedagogy class, and Stork said this helped finetune her singing skills.

Stork also said she brings together her experience playing in Li’l Anne and Hot Cayenne to connect with her students. When senior Savanna Lenker had Stork as her professor, she said that Stork asked students on the first day of class to write down something they could have a conversation about.

“She’s a person who’s very approachable and easy to talk to and definitely wants all of her students to succeed,” Lenker said. “That’s [something] not all environmental studies professors have.”

Lenker is a teacher’s assistant in Stork’s Environmental Science and Technology course. She saw Li’l Anne and Hot Cayenne in concert last year, and she said that she was surprised to hear her professor sing.

“I think that’s one thing to go watch somebody perform in an instrumental way, but I feel like being able to hear her voice was … so different from any of [my] other experiences with her,” Lenker said.

Russell recorded a full-studio album with Li’l Anne and Hot Cheyenne approximately 10 years ago, when the band comprised different members than it does now.

“So as long as Anne’s there, it’s Li’l Anne and Hot Cayenne,” Russell said. “The arrangement of musicians that are in the band right now, I think, are the best they’ve ever been actually. It’s very easy to make a good mix of a band that is playing really well.”