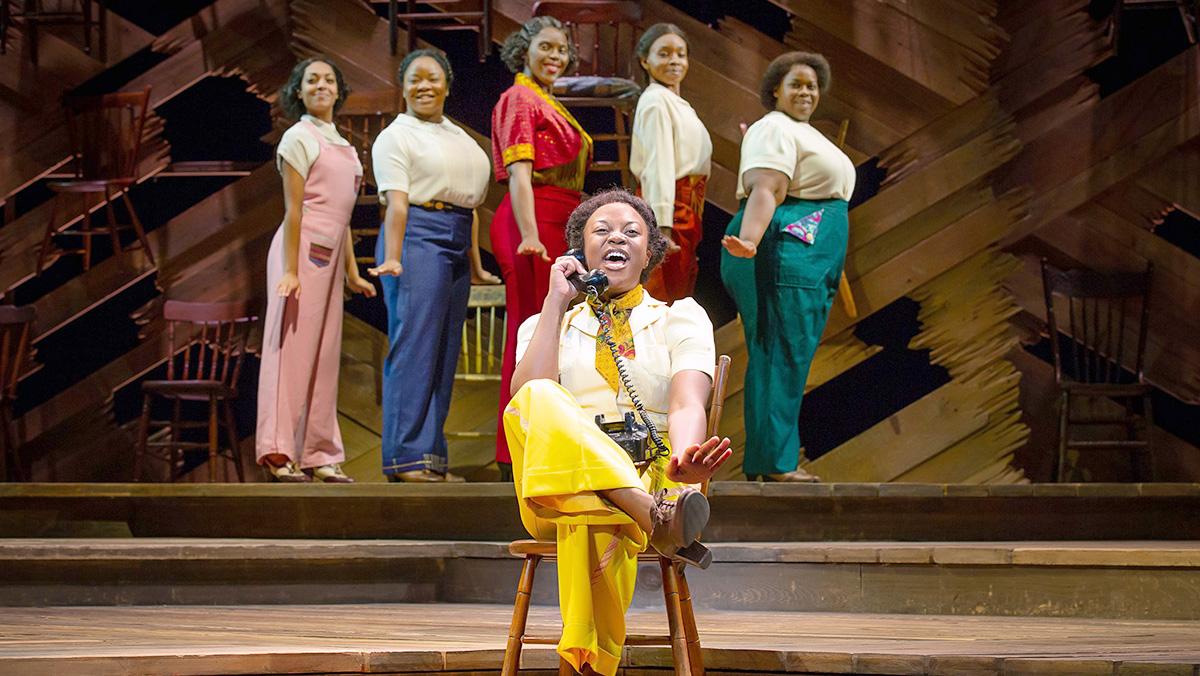 Courtesy of "The Color Purple" musical
Mariah Lyttle ’19 performs with her fellow cast members as Celie in the tour revival of the winning broadway show “The Color Purple.” The tour started in October 2019 and runs until May 2020.
By Gabrielle Topping
Published: February 19, 2020

In the national tour of “The Color Purple,” a Tony Award–winning musical, Mariah Lyttle ’19 plays Celie, the show’s protagonist. She has been working across North America with the show since October 2019.

The tour will continue until May 2020. “The Color Purple” is based on the Pulitzer Prize–winning novel written by Alice Walker and Academy Award–nominated feature film with a Grammy–winning score of jazz, gospel, ragtime and blues.

Lyttle has been involved in musical theater since she was in her freshman year of high school. She graduated from Ithaca College with a musical theater degree, and since then, she has continued her pursuit of theater arts.

At the college, Lyttle played Sarah in “Ragtime,” Mabel/Lula Standby in “Violet,” Dot in “K-I-S-S-I-N-G,” Marta in “Company” and Mama in “Dogfight.” Her regional credits include playing Dorothy in “The Wiz” at Virginia Repertory Theatre in Richmond, Virginia; Sarah in “Ragtime” at Park Playhouse in Albany, New York; and Dionne in “Hair” at Broadway Method Academy in Fairfield, Connecticut.

Staff writer Gabrielle Topping spoke with Lyttle about her acting journey and her role in “The Color Purple.”

Gabrielle Topping: Can you describe your journey from college [theater] to [professional theater]?

Mariah Lyttle: I graduated in May, and immediately, the next day, I did a show in Virginia. I did “The Wiz,” and I played Dorothy. Towards the end of that contract, my agent sent me an audition notice for [“The Color Purple”], and I sent in a video, and I met with the creative team at the end of July, early August and I did a work session with them. Then the next day, as I was on my way to another audition, I got the call that I got this job.

GT: What is your favorite part about playing your character, Celie?

ML: Her journey is so relatable on so many aspects. It’s a story that needs to be told now and can always be told. It’s timeless. It’s a journey that everyone should witness. … There are a lot of parts of the story that I know people can relate to regardless of gender, race, anything. It’s a story about faith, and that is something that is so important to me, and I think it’s important for everyone. It’s not a religious thing — it’s really honing in on the idea of believing in something even though it might not look like it’s going to come to pass because eventually, it will.

GT: What is your favorite song in the show “The Color Purple”?

ML: My favorite song is “Miss Celie’s Pants,” which is in Act 2. … “Miss Celie’s Pants” is the first time that we see Celie happy. So we watch Celie’s whole journey over 40 years, from 14 in the beginning of the show to 54 at the end of the show. “Miss Celie’s Pants” is the first time that she gets to actually be happy and is taking what used to be a negative aspect in her life and turning it into something positive, which I think is a lesson that everyone can learn. So she used to have to sew and clean when she was living with her husband, Mister, and when she got out of that relationship, she turned her sewing into a business and started to make profit and her life just really started to turn around. It is evident in the song because it’s the first upbeat song that she sings in the whole show.

GT: What is a typical work week like for you while you’re touring in “The Color Purple”?

ML: Every day is different. Every week is different. We will usually have six to eight shows a week, depending on how often we’re traveling and how far we’re traveling. We have a lot of one-nighters, which is when we travel in the morning and get to a venue and we do the show that night, and then we sleep and travel again the next day and do it all over again. It’s quite strenuous, but it’s worth it. But then we also have weeks … where I’m in [one place] for a whole week, and we have eight shows.

GT: How has Ithaca College’s theater department prepared you for your career?

ML: I didn’t start musical theater until high school, but I learned all the basics. When I got to Ithaca, I really honed in on my acting skills. I started singing at a very young age. As I got older, my voice got more mature. I learned a lot about myself as a human in college and that portrayed through in my acting and singing. I really had to learn not to take this passion of mine for granted and just really think about how lucky I am to be doing what I love and calling it a job. I definitely garnered a sense of strength and courage in performing. I realized how important it is to tell these kinds of stories to other people and to surround myself with people who are like-minded and want to do the same things that I want to do. There was a sense of community that Ithaca provided me with, and I think that is very important for this kind of job because a lot of it is who you know and who knows you.

GT: What do you love most about acting?

ML: When I was younger I used to dress up all the time and play pretend. …  [Actors] get paid to play pretend, and it’s such a funny concept. But in that, we get to tell these stories that people might be too scared to tell themselves, especially with a show like “The Color Purple” with the topics that it covers. These are real topics that are hard to hear but that doesn’t mean that they’re not real and they’re not true. Back in the day, people used to come to the theater to have that sense of relief. People come to be reminded that they’re human and other people feel the way that they feel. I think that is my favorite part about acting, knowing that I’m the catalyst for it.