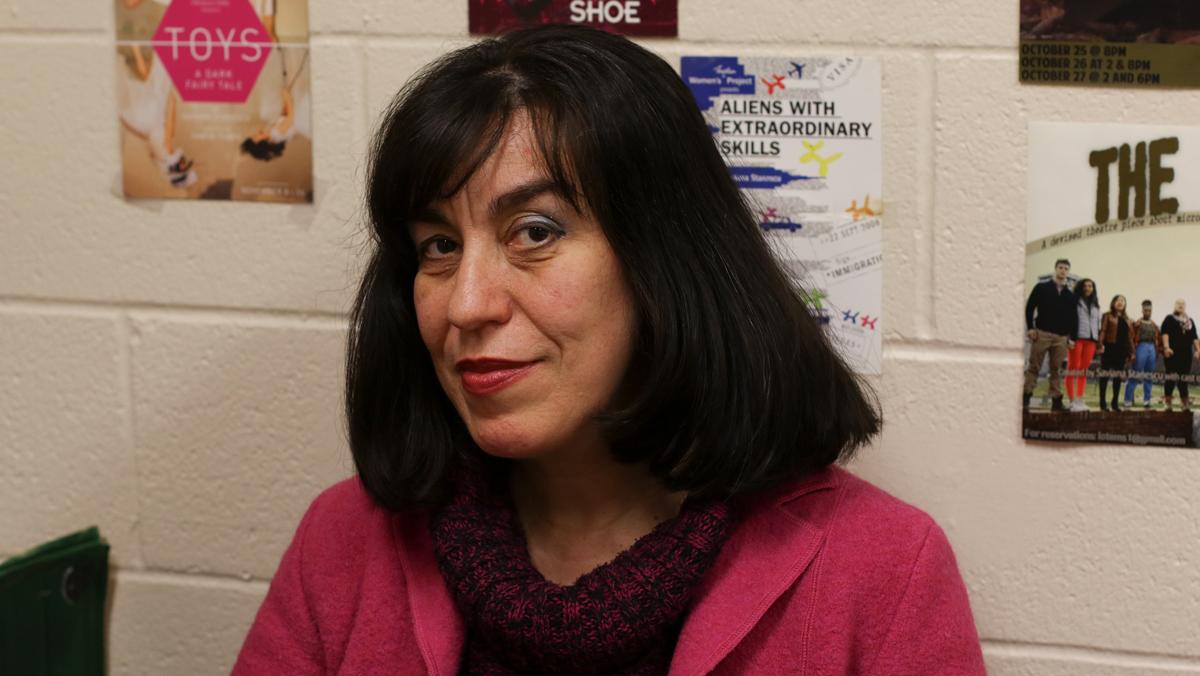 Maxine Hansford/The Ithacan
Saviana Stanescu Condeescu, assistant professor in the Department of Theatre Arts, was a panelist at the Theater and Resistance Symposium in New York City Jan. 12. Her play "Waxing West" is also featured in the Women's Voices Theater Festival in Washington D.C. Jan. 19 to Feb. 10.
By Sierra Guardiola — Life and Culture Editor
Published: January 28, 2018

Saviana Stanescu Condeescu, assistant professor in the Department of Theatre Arts at Ithaca College, presented at the Theater and Resistance Symposium in New York City on Jan. 12. In addition to being on the panel at the Symposium, her first play written in English, “Waxing West,” is featured in the Women’s Voices Theater Festival in Washington, D.C. held Jan. 19 to Feb. 10.

Life and Culture Editor Sierra Guardiola spoke to Stanescu Condeescu about how she began her work as a playwright, her experience at the Theater and Resistance Symposium and her work as an activist.

Sierra Guardiola: How did you get your start as a playwright?

Saviana Stanescu Condeescu: I am Romanian, and after being in the streets of the revolution to end the dictatorship of Nicolae Ceausescu of Romania, I started to work as a journalist in the free press. I started to cover many cultural and political events. It was a very exciting time to finally have the freedom of speech. At the time, I was a poet. I had published a few books of poetry by 1996. Then I wrote a dramatic poem called “The Outcast,” and it got produced in Paris … They invited me over there and it was my first time in the West, and then they started to call me a playwright. Until that time, I was considering myself a journalist and a poet.

SG: How did you get chosen to be a panelist at the Theater and Resistance Symposium?

SG: What was your presentation at the symposium about?

SSC: I spoke in a very passionate way, and then multiple presenters quoted me and referenced me … I was so passionate about speaking about the role of theater in triggering social change, and the responsibility of us — the artists, teachers and educators — to have this strong role in bringing social change, or raising important questions and awareness about important social issues through our art and through our pedagogical methods.

SG: Can you explain the ways that you seek activism in the work that you do?

SSC: I consider myself an “artivist” because I am doing activism through my art … Everything I do with my art is, in a way, trying to raise important questions — to stand up for the different, the oppressed, the outcast … the others, people who have been othered or discriminated against systemically or personally. My work is very much connected still to this support and … to raise awareness and bring some insight into the lives of the others.

SG: With your play “Waxing West” being performed at the Women’s Voices Festival down in D.C. and then going to this Theater and Resistance Symposium, how are you feeling about your work reaching so many people at one time?

SSC: For me, it is very important to do so. That is why I am trying to accept as many invitations as I can. Especially for artists, the audiences are extremely important. The people that you reach, the community that you build, the voices being heard by as many people as possible, is what motivates me and what keeps me going.

Saviana Stanescu, associate professor of theater arts, wrote the play “Lenin’s Shoe,” which will be performed as a staged reading at 7:30 p.m. Nov. 15 at the Hangar Theatre.

A walk in their shoes: Civic Ensemble performs staged reading of theater professor’s play about identity