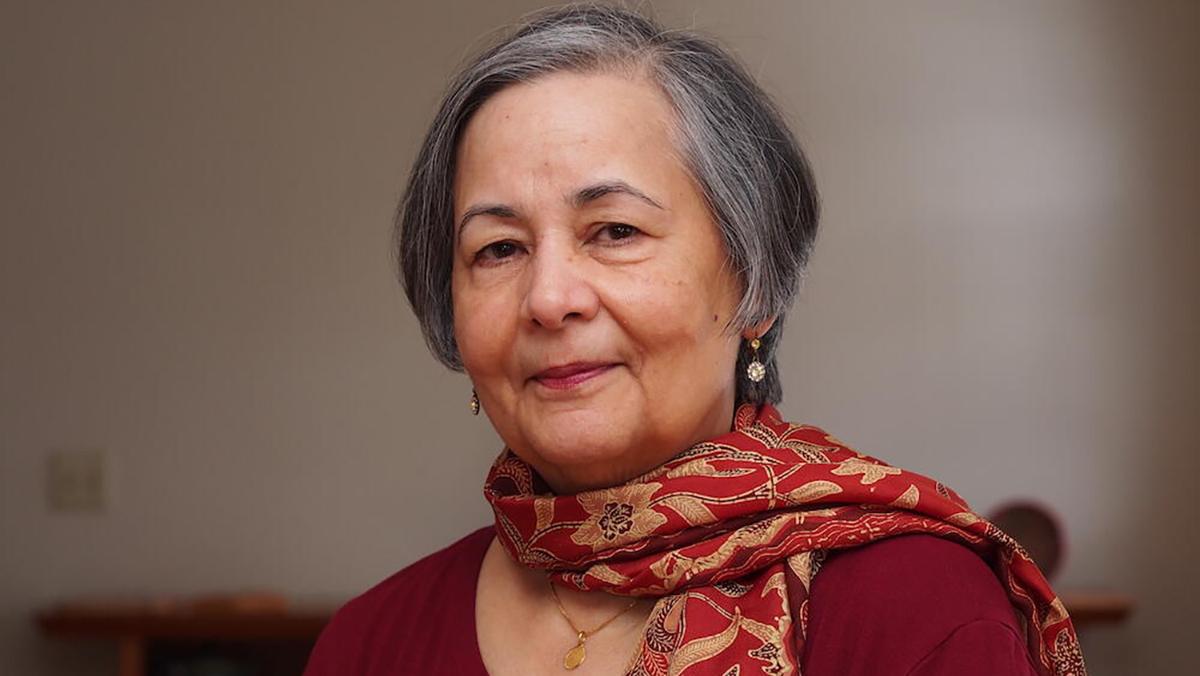 Courtesy of Ulises Mejias
Asma Barlas, professor Emerita in the Department of Politics, discussed unlearning patriarchal interpretations of the Quran with members of the Khadija-Maryam Foundation on Nov. 14.
By Kinsey Burr — Staff Writer
Published: November 30, 2022

Asma Barlas, professor Emerita in the Ithaca College Department of Politics, participated in a community dialogue Nov. 14 over Zoom with members of the Khadija-Mariyam Foundation about the Quran’s teachings of marriage and the family.

Barlas was invited to discuss a chapter from her book, “Believing Women in Islam,” which was published in 2002, with a second, revised edition published in 2019 focusing on unreading patriarchal interpretations of the Quran. Barlas read from a chapter in her book concentrated on the Quran’s expectations for marriage and familial relationships. The foundation is most known for building the first women-only mosque in Kerala, India.

Staff writer Kinsey Burr spoke with Barlas about the importance of holding community discussions and the power they provide participants.

Kinsey Burr: What was the purpose of this community dialogue?

Asma Barlas: The [foundation] … picked a chapter from my book which specifically addressed how the Quran conceives marriage and relationships not only between spouses but also parents and children. They wanted to focus specifically on this chapter because a lot of sexism and misogyny flows in Muslim cultures from reading certain verses [in the Quran], for example, ones giving husbands the right to beat a disobedient wife. It was important for them to hear that this is one interpretation, and it can be challenged and has been challenged by lots of scholars. It was meant to be introductory comments on my part, and we had about 40 people who had questions, not just about what I said but about things they hear in their non-Muslim communities.

KB: Why did you choose to participate in this discussion?

AB: It was important to do this discussion because not many people have my perspective, and it is important for young Muslims to hear that we can read the sacred text of Islam in ways that are liberating for women. I thought having a discussion would be better than me just lecturing for 30 minutes. When I was teaching at Ithaca College, I did not lecture in my classes. Basically, the students read the text, we sat in a circle and we struggled with those texts together, and I find that is a better way to engage people than just hearing one person say what they want.

KB: What was it like to interact with the community during this dialogue?

AB: I think it was helpful for me in some ways because when you are in [higher education] and you are writing books, you do not always have a sense of how people are living in far away countries. Sometimes you don’t even have a good sense of what is going on in your own country. This was a group of young Muslims who got fed up that women could not pray inside the mosque because of stipulation in the Quran that women cannot pray together with men. Muslims segregate women, and if they are allowed into mosques, they are either put in the basement or in another room of the mosque and the men occupy the main space. Women are excluded and marginalized; now I know that, but it is a very different thing to talk to women who are going through that process and women who have decided that they do not want to join the men in praise; they wanted their own praise space and they have gone and done that. For me, the discussion was not for me just to share my views, but also to learn about what is happening on the ground in the lives of real Muslims far away in a country I will never get to visit.

KB: Why is it important to have these community dialogues?

AB: I think what is important in a dialogue is you do not set the stage completely with the people; you just share some thoughts and you allow other people to share thoughts, which they may not get to share otherwise. These issues infringe on the lives of real people living in real communities and sometimes there is not enough space in a community to speak about issues that upset folks. Having a dialogue in a space where people feel heard, where people feel they can talk openly, where they feel they may be listened to by the person they are talking to and are free to express their opinions — I think that is a very powerful way for people to learn.

KB: Have you ever done a community discussion like this?

AB: More than once when I was the director of the Center for [the Study of] Culture, Race, and Ethnicity at Ithaca College we used to often have discussions and we would have students and faculty and on a number of occasions we invited people from Downtown [Ithaca]. For example, there were discussions on prisons … and we invited people from Downtown Ithaca involved in a movement against private prisons. It was a very rich dialogue because usually students do not get to talk to people in the community. I have also presented in closed audiences especially around Islam because my ideas are not particularly popular among many Muslims because I am against patriarchial readings of the Quran and I am a critic of Muslim cultures, which are very male-worshipping. So, many times the people who invite me worry about my safety and the safety of the people attending those events as well. I have also spoken publicly and people have questioned me and we go back and forth, and that is part of intellectual development to argue with people you do not agree with, and it is OK to get push back and to push back yourself.

KB: Will you participate in community dialogues like this in the future?

AB: Yes, because I think that especially when you are talking about religion, it is not only from an academic or theoretical perspective; you are speaking to people who live their religion in different ways and it is important to get out of colleges and universities and institutions of higher learning and into places where average, ordinary people live, who have questions and who want to engage with you.