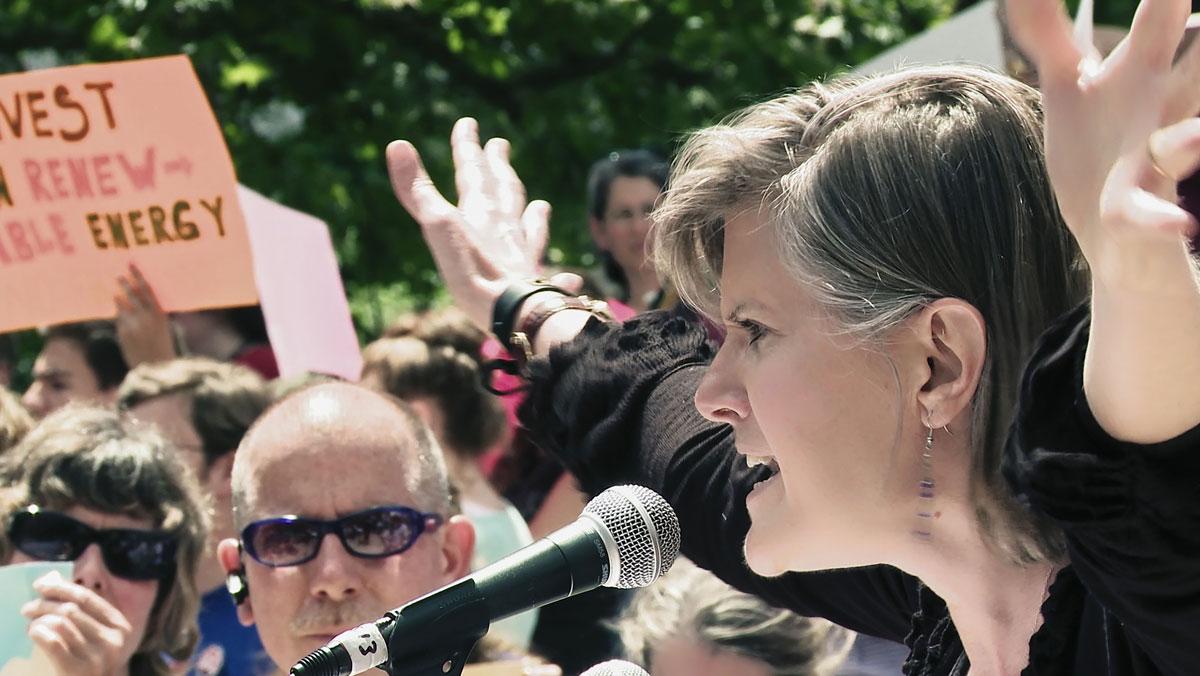 Courtesy of Sandra Steingraber
Sandra Steingraber speaks at a 2013 rally in Albany, New York, to ban fracking. Steingraber is a distinguished scholar in residence at Ithaca College, as well as a biologist and activist.
By Silas White — Assistant Life and Culture Editor
Published: November 8, 2017

“Unfractured” is a documentary that follows biologist and activist Sandra Steingraber, a distinguished scholar in residence at Ithaca College. In the film, Steingraber practices civil disobedience to oppose the storage of fracked gas at Seneca Lake. The documentary was shot by Canadian filmmaker Chanda Chevannes. The film’s world premiere was Oct. 19 at the International Environmental Film Festival in Toronto, Canada, and its international premiere will be Nov. 11 in the “Fight the Power” section at DOC NYC, America’s largest documentary film festival. Silas White, assistant life and culture editor, spoke to Steingraber about traveling to Romania, getting arrested and protesting natural gas storage at Seneca Lake.

Silas White: How did you meet Chanda, and why did you decide to be a part of the documentary?

Sandra Steingraber: I worked with Chanda before: She brought my previous book “Living Downstream” to film. That was a four-year project, and during that time we really became collaborators. To watch her figure out how to tell a visual story … was sort of amazing to me and made me realize the power of film as a medium. When Chanda began to follow me as I reinvented myself as a frontline activist … she got very intrigued in chasing that story. We didn’t know where the story would go, and we ended up being chased through the streets of Romania and she followed me, as far as she could, into jail, so the film really marked my personal transformation into a new person.

SW: What was the reason you decided to become an activist?

SS: Well, the way I previously thought of myself was kind of a two-way translator between the scientific community and policymakers. What I learned through the struggle to ban fracking in New York and the struggle to keep fracked gases from being stored under Seneca Lake was that science alone isn’t enough. In this case, the data by itself wasn’t persuasive enough, and it had to be carried into the political arena by a social movement.

SW: What decision went into making the film follow your personal life, rather than just your activism?

SS: That was purely the filmmaker’s decision. She shot 200 hours’ worth of film, so I can’t even imagine how she turned that into a 90–minute story. The driving force is … the interior story, the struggle to fight with one’s whole heart. I’m a mother of two children, and in the middle of all of this, my husband had a series of strokes and had to become hospitalized. The central conflict of the film is this every woman’s dilemma of trying to raise your two children, and suddenly you have a disabled spouse, and yet there’s something threatening the whole community. The irony is that I have to leave the family to protect it. Sometimes that takes me to Romania, sometimes that takes me to jail.

SW: What was it like to go to Romania?

SS: It’s a culture outside my immediate understanding. And yet, I felt a real empathy for the people there, who’ve been under several ages of occupation. There was Hitler … then the Soviets … the dictator, Ceausescu, was one of the worst of all the Eastern Bloc communist dictators of the day. Now there’s Chevron, a U.S. corporation that is doing what Hitler couldn’t, which is getting all this fossil fuel out of the bedrock through the process of fracking. What I saw was people using the skills they developed under Ceausescu, when they all had to learn how to organize themselves and do disciplined kinds of resistance. They are redeploying those skillsets to kick out an American fossil fuel company. They staged unarmed occupations of the land Chevron eventually built this rig on. They’ve sacrificed much more than I’ve ever had to do in order to keep Chevron out. I came back from Romania with ideas on how to organize at Seneca Lake.

SW: What was going through your mind when you were arrested for protesting the project to store natural gas under Seneca Lake?

SS: It was somewhat of a relief — that was the intent. We ran a civil disobedience movement that was highly disciplined … so the arrests were all part of what the intention was. It captured the world’s attention — we had stories written about in The New Yorker and New York Times.

SW: How did you feel when Governor Cuomo announced the ban on fracking in New York State?

SS: It was amazing that that scene was caught on camera. The cameras were actually filming the civil disobedience, we had just had our largest civil disobedience to date. After they were hauled away, we went down to the jailhouse and awaited news, we saw on C-Span the governor’s decision to ban fracking in New York. I immediately started to sob, instead of the weight coming off of my shoulders, it felt like it came onto my shoulders. How exhausted I was, how many nights’ sleep I had missed, it was like I could finally lay my sword down. I didn’t realize how incredibly tired I was and how much I had missed my children.