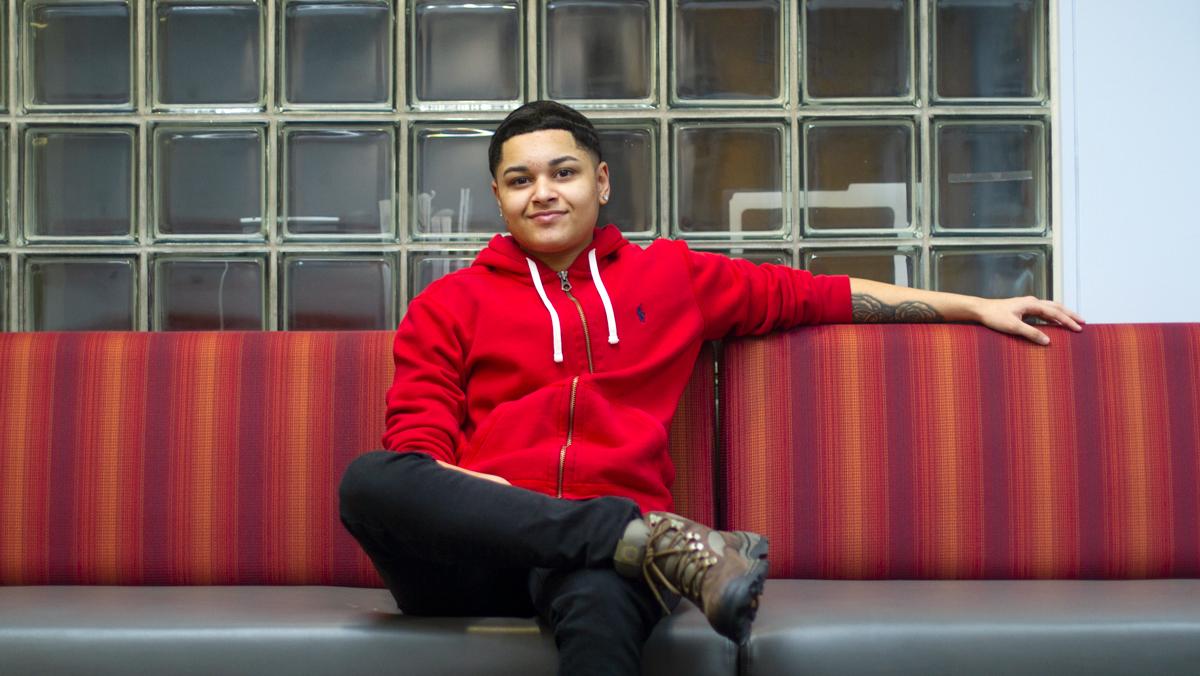 Kristen Harrison/The Ithacan
Ethan Cepeda helped raise awareness for transgender rights at his high school by holding workshops to educate teachers. Cepeda also spoke out about the importance of gender neutral bathrooms and advocated for their implementation in the school.
By Vivian Goldstein
Published: January 21, 2019

When Ithaca College freshman Ethan Cepeda received the New York Daily News’ 2018 Hometown Hero Award, he didn’t even know award existed. Suddenly, on Nov. 2, his mother and sister were accepting the award on his behalf while he was busy with classes at the college.

Cepeda was recognized for working with his high school, Careers in Sports High School in the Bronx, to add a gender-neutral bathroom and improve the quality of education for LGBTQ students. He also helped hold workshops specifically targeted toward faculty and staff on how to effectively address situations and have conversations about LGBTQ issues.

Staff writer Vivian Goldstein spoke with Cepeda about why he chose to take action about these problems in his high school, the obstacles he faced and what receiving the award meant to him.

Vivian Goldstein: Tell me about what you did to win the Hometown Hero Award.

Ethan Cepeda: I didn’t even know about the Hometown Hero Award. I guess you had to nominate someone you know to receive it, and so somebody nominated me. I still don’t know, to this day, who. But, basically, freshman year and sophomore year of high school — they were pretty tough for me. … I went through a lot of stuff, like depression, my parents getting divorced. Just a bunch of things going on. … And so then my best friend came out to me around the end of sophomore year of high school, and he told me he was transgender. And so, I looked up the term a little more because I didn’t know what that was. I basically figured out that that term described exactly who I was. And so, I just realized, as a transgender person, there’s so much wrong in the world and especially in the community I’m in — the Bronx, because homophobia, transphobia, that’s a huge thing over here. … I basically struggled in school, like little things, like going to the bathroom. … So I advocated for a gender-neutral bathroom in the school because we didn’t have one. And so I spoke to my principal throughout the whole year, had meetings, and I was telling him, ‘We need this bathroom in this school.’ … By the beginning of my senior year, I walked into the school, and my counselor … told me that we had the bathroom installed for that year, so that was really good. … I helped lead workshops for staff in the school, trying to show them and teach them about the LGBTQ community and just help them figure out how to address certain situations. … Overall, just to make the school and the environment there a lot safer and much more comfortable because when students go to the school, you want to be safe. … Ever since we held those workshops, you can see the difference. … We also have workshops for the students as well where we basically did the same thing. We helped them be more empathetic to other students who are out, who are not out, because you never know who’s around you.

VG: How did it feel to be the one teaching your teachers?

EC: At first, I was a little nervous. I didn’t do it by myself. I had the help of the Gay-Straight Alliance, my friend … We had a little fun with it because it was like, ‘Oh, you guys are the students. We’re going to tell you what to do now.’ Once we started talking, it kind of felt like I had power in a way. … It was a good type of power because I knew that by the end of these workshops, hopefully, change would be done. … It felt really good just knowing that adults don’t know everything. … So you can always learn from teachers, and teachers can learn from students, and that’s exactly what we proved.

VG: What inspired you to take that action to create workshops to educate people about trans issues and bring gender-neutral bathrooms to your high school?

EC: A big part of it was my best friend. … I would consider myself an extrovert, and he would consider himself an introvert. … Seeing people like my best friend and just knowing there are other people out there who don’t stand up for themselves, and I’m like, ‘Well, if I can do it, then why shouldn’t I? I should be the one to be the voice for certain people who can’t speak up for themselves.’

VG: What was your reaction when you found out you won the Hometown Hero award?

EC: That was crazy because, again, … I don’t even know who nominated me. … It was really overwhelming, but in a good way.

VG: What does it mean to you to win such an award?

EC: It means a lot … because there’s a lot of people out here who do a lot of great things every single day, and they don’t get the recognition for it. I’m just glad that I could get all this recognition because the main thing that I want to do is be a role model for other LGBT people, especially trans men of color.

VG: What are your plans for the future in helping communities you are a part of?

EC: I have a few plans: one, being a motivational speaker for a variety of people in the LGBTQ community, for people who are not part of the community, educating others, just a public speaker, basically, about my experiences. Also, I hope to have a clothing line at some point where it’s specifically for transgender people.

VG: What would you say to other future activists, especially LGBTQ people, who want to start creating those same changes?