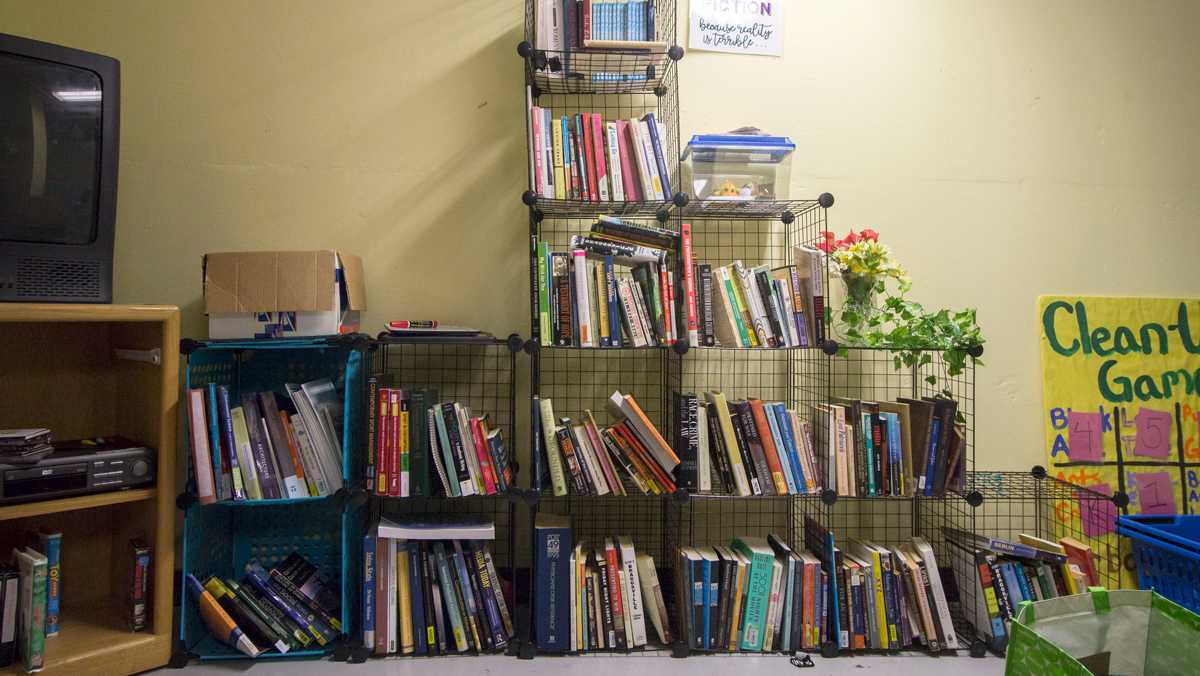 Molly Bailot/The Ithacan
Students can drop off unwanted items at Take It Or Leave It (TIOLI), a re-use room run by Eco Reps.
By Ash Bailot — Contributing Writer
Published: October 3, 2018

TIOLI is run by Ithaca College Eco Reps, students employed by the Office of Energy Management and Sustainability. They encourage sustainability at Ithaca College through a number of programs including TIOLI and Office Supply Collection And Reuse, or OSCAR. Both programs encourage students and faculty to donate unwanted objects that would otherwise end up in a landfill. Others can then take these discarded items for free.

“A lot of the stuff in here are things you’d normally buy at Walmart, but here they’re free,” she said.

Sophomore Xing Ke Elrick said they’d rather rummage through TIOLI than spend money at a big corporation like Walmart that pursues potentially unethical production practices. They also said they enjoy the on-campus convenience of TIOLI.

“Being on campus is just a lot easier,” Elrick said. “Also, like I said, I don’t like the idea of wasting. If there’s a way that I can get something where it’s like, ‘This is going to be thrown out if someone doesn’t take it,’ … I’d rather go and get it or find someone that wants to use it. Why not? It’s right there.”

Another similar program Eco Reps runs is OSCAR. Senior Marisa Lansing, eco rep and environmental studies major, works at OSCAR. She said it differs from TIOLI in that it focuses more on school and office supplies, as opposed to the clothing and dorm items typically found at TIOLI. Located in a small, cluttered closet across from the Phillips Hall Mail Center, OSCAR is open from noon to 1 p.m. on Tuesdays and Thursdays.

Senior Anderson Ozello stumbled upon OSCAR while walking past it one day. He said he has used it several times and procured objects ranging from binders to paper coin rolls. He said he enjoys searching through the array of free items.

“It’s better than going to the campus store and paying for things that are overpriced,” Ozello said.

He said that although sometimes the quality of the items is subpar, he’s willing to sacrifice quality for the unbeatable price and sustainable practice.

“If it’s not broken, why throw it out?” Ozello said.

Although TIOLI and OSCAR have been at the college for a while, they’ve become more popular in the last few years.

She’s seen an increase in popularity since she first joined Eco Reps as a sophomore, citing increased social media presence as a factor for TIOLI’s growing popularity.

“When I was a sophomore, sometimes there would be nobody that comes during a shift, but now there’s almost always a least a couple people who come,” she said.

Perrow said Eco Reps has been putting up posters, posting on social media more often and rebranding to get more people interested in TIOLI.

“Last year, we started advertising TIOLI as ‘Ithaca’s free thrift store,’ which tends to be more attractive to people than just Take It Or Leave It,” Perrow said.

Lansing said the Eco Reps often hear from professors about donating or picking supplies up from OSCAR. For TIOLI, resident assistants in every residence hall put out a box for unwanted items at the end of the school year to add to the heap. The TIOLI staff members sort through the boxes to find things that are worth putting out. The items they deem unworthy are sometimes sent to the Ithaca Reuse Center.

Some of the quirkier items that can be found at TIOLI are a life-sized, stuffed human dummy with semirealistic hands; a pumpkin decoration with Ted Cruz’s face on it labeled “the Zodiac Killer;” and a single packet of beef-flavored Ramen noodles.

The weirdest thing they’ve ever found?

Elrick said they once found a box of old cassettes and VHS tapes they took from TIOLI but usually go to look through clothing.

“I found these big ol’ jeans that I own now,” they said. “They are my favorite pants.”

Lansing also said she thinks many students are attracted to TIOLI items because they are free.

“I think the free piece is really exciting to people,” she said. “And then, the sustainability piece comes after that, but it’s just important to think about.”

Lansing said the life cycle of an item, from its birth in a factory to its often untimely death in a landfill, releases potent fossil fuels that contribute to climate change. However, she said, programs like TIOLI and OSCAR help address this problem.

“It’s sort of rethinking the way that we live our lives and that we relate to the things that we own,” she said.

Lansing also said she thinks these programs are valuable because they allow students and faculty to build community and a culture through the cycle of donating and taking items.

“I think it’s really important that we think about our own personal impacts and how that can impact the entire community here,” she said.