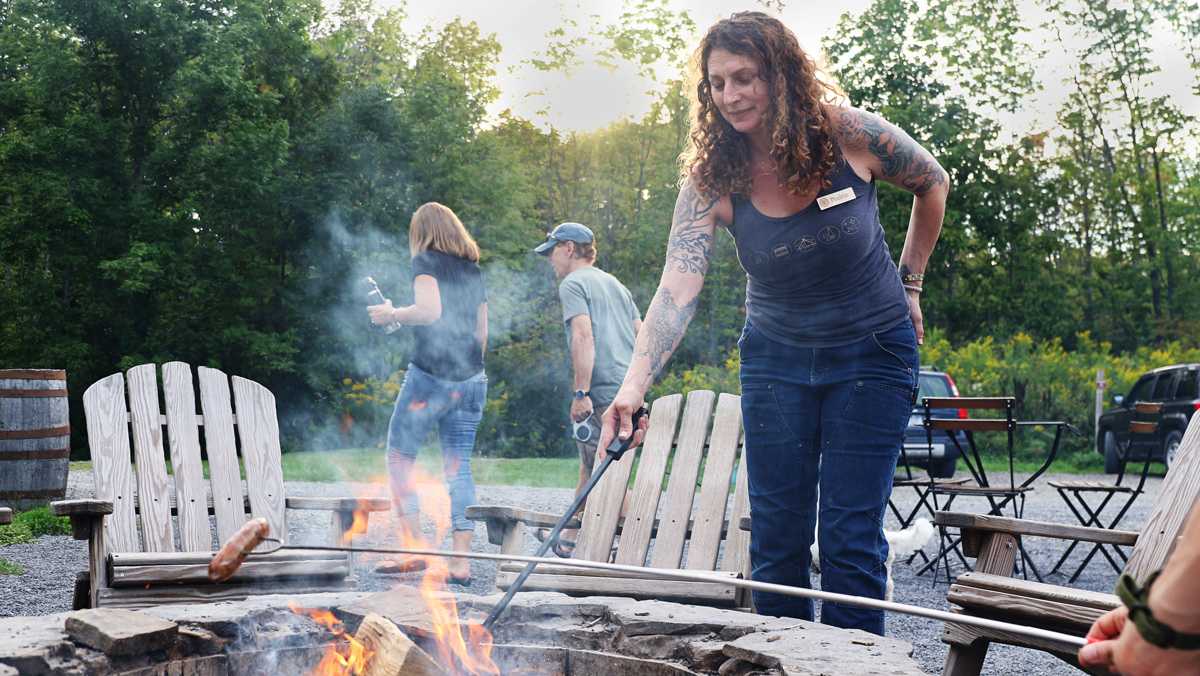 Ash Bailot/The Ithacan
Prairie Landeau tends the fire at Firelight Live. The event takes place every Tuesday and is open to everyone of all ages and interests. It takes place at Firelight Camps.
By Olivia King — Staff Writer
Published: September 11, 2019

Down a gravel walkway behind La Tourelle Hotel & Spa, a small crowd of people listen and relax to soft music covers. Some attendees linger by the campfire, while some walk around the grounds with their children. Others spend their time in a cozy tent, home to a bar and music drifting in from outside. People are here for Firelight Live, a recurring music event that takes place every Tuesday, located on Danby Road.

Emma Frisch, co-founder and owner of Firelight Camps and Firelight Live, sat by the fire with her child. Frisch said she and her husband were brainstorming a way to involve the local community more intimately with the Firelight campsite when they came up with the idea for Firelight Live, an event in which people could come for free from the community. Firelight will continue until Oct. 29.

Frisch said that while her favorite experiences from Firelight Live involve the community she helped build, her daughter’s favorite memories are probably the marshmallows, judging by the smudged smores on her face

Frisch said something that makes Firelight Live special is that it’s one place where all generations can come and enjoy themselves. She said it is a space that is inclusive, welcoming and entertaining. The venue provides many spaces for guests and locals to hang out in and spend time together, Frisch said.

“It really comes down to the campfire experience,” Frisch said. “Since we started with six tents, the campfire has always defined the experience and created that sense of being outside with the community — connecting with yourself, nature and the people around you.”

Bobkowski said this has been Firelight Live’s most successful year in terms of bringing people in. She said that the menu has improved and that the event have increased focus on specialty drinks. In the past, Firelight Live has had food trucks or vendors, but this year they have set up a food program with The Piggery.

Bobkowski said the crowd that the event attracts depends mainly on the musicians. She said attendees range from young families to older members of the community as well as college students. Most weeks, resident musician Ted Walsh takes the stage, solo or with friends.

General Manager Jason Smith said that last year, Firelight Live was geared towards catering to guests at the Firelight Camps, but this year, the managers shifted their focus and aimed to bring in more locals and visitors from outside the campsite.

“This year, we found our sweet spot with the music,” Frisch said. “Being in a region that’s so devoted to and famous for music, particularly bluegrass and acoustic, which pairs so nicely with the fireside experience, we created Firelight Live.”

Serena Stern, a Firelight Live attendee from the Ithaca area, sat and relaxed at the event. She said the music accounted for much of the event’s atmosphere.

“People who might not come out for loud, late music can come out with their kids and just hang out,” Stern said. “It just makes a really special community setting for music.”

Attendees Kris Altucher and Marin Clarkberg also said the relaxed, outdoor setting makes Firelight special and perfect for a summer evening. Altucher, lounging by the fire, said it’s nice to have something like Firelight Live to draw people in from all over.

“People come here and appreciate how beautiful the place we live is,” Altucher said.

Clarkberg said it is nice to know that Firelight Live is here as an option for people in the community to enjoy outdoor music while the weather is still warm.

“It’s a perfect evening,” Clarkberg said. “Why not spend it outside in this beautiful setting?”