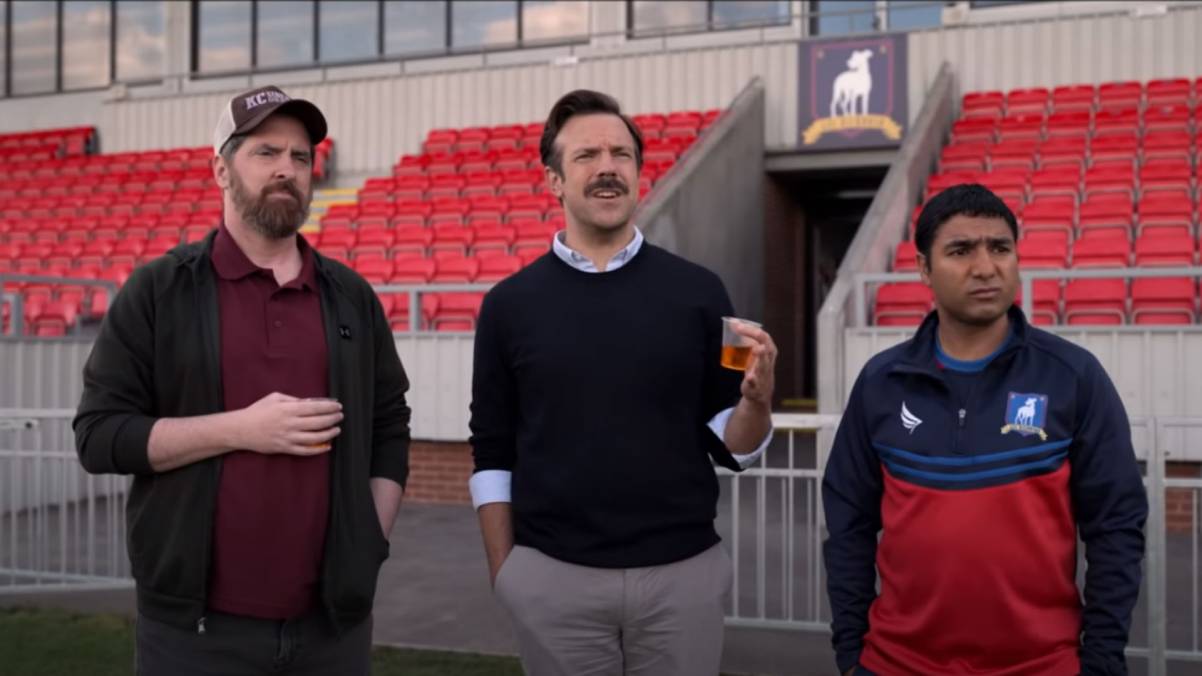 Lace up those boots and get your bum to the pitch because Ted Lasso has finally made his debut on Apple TV+. This new show highlights the titular character Ted Lasso, who first appeared in 2013 when Jason Sudeikis portrayed him in a series of English Premier League advertisements on NBC Sports Network aimed at getting Americans to watch football — what we refer to as soccer. When the trailer for this show came out, it had many people questioning its validity because it is based on a character who had previously only appeared in two commercials.

“Ted Lasso” tells a story about perseverance and overcoming others’ expectations. Ted is a Kansas native and the coach of an American college football team until he is hired by AFC Richmond Football Club. Richmond is a fictional team in the English Premier League, but it borrows many qualities from real teams, like Crystal Palace. The message is rather meta, as the show itself had people scratching their heads, assuming it’d be a failure. Like the characters in the show who overcome societal expectations, the show itself does the same thing.

The time and effort put into “Ted Lasso” is most present in the show’s ability to capture the culture of football in England. Some characters are based on real football figures, like Roy Kent (Brett Goldstein) taking obvious inspiration from Roy Keane. Other characters represent the footballing culture of a specific nation, like Sam Obisanya (Toheeb Jimoh) and Dani Rojas (Cristo Fernández) representing the play style of Nigeria and Mexico, respectively. The attention to detail when the characters bring up their origins is important because it plays a huge role in the real-life game. Players from countries like Brazil, Spain, Argentina and Mexico have a highly attacking, flare-oriented play style that is captured by Dani’s character. On the other hand, Sam is a Nigerian immigrant who came to England when he was quite young. This is a common trend in English football, and Sam represents the giddy optimism often found in these young players.

“Ted Lasso” shines during the sequences of Richmond playing games. The thrill of watching a real match still comes through even when the actors’ lack of athleticism or the stadium’s setlike look become obvious. This type of energy is captured perfectly in episode five, “Tan Lines,” when Roy and Sam have a pivotal bit of linkup play. This moment is accompanied by the screaming of fans and emotional call from real-life commentator Arlo White. This scene is sure to bring tears to the eyes of any viewer who knows the thrill of a late game-winner from the club they have loved their entire life.

The show’s heart is a large part of what carries it to success. Frankly, it’s impossible not to love every character in this show. Hannah Waddingham’s performance as Rebecca, the owner of Richmond, is well rounded, and her emotionless facade feels like it exists to protect her deep insecurities. Her character is a great juxtaposition to Keeley Jones (Juno Temple), a model who is dating star striker Jamie Tartt (Phil Dunster). Jones’ comedic timing offers one of the show’s best characters.

“Ted Lasso” is a show riddled with greatness, but the show’s crowning jewel is its main character. His endless optimism, even in the face of a struggling marriage and a fan base that hates him, never wavers. His subtle intelligence makes every second he is on screen just as funny as it is exciting. This show has far more layers than one might expect as Ted is not the hopeless fool that everybody thinks he is. The best scenes with Ted, however, are the ones he shares with Rebecca. Their relationship is what makes “Ted Lasso” tick and provides some shocking and emotional moments in the latter half of the 10-episode season.

“Ted Lasso” provides an uplifting story in what is an otherwise depressing world. The message of this series illustrates that if someone can be good to the people around them while challenging them to be better, then they can do anything. It reminds the viewer to be like Ted and just believe.