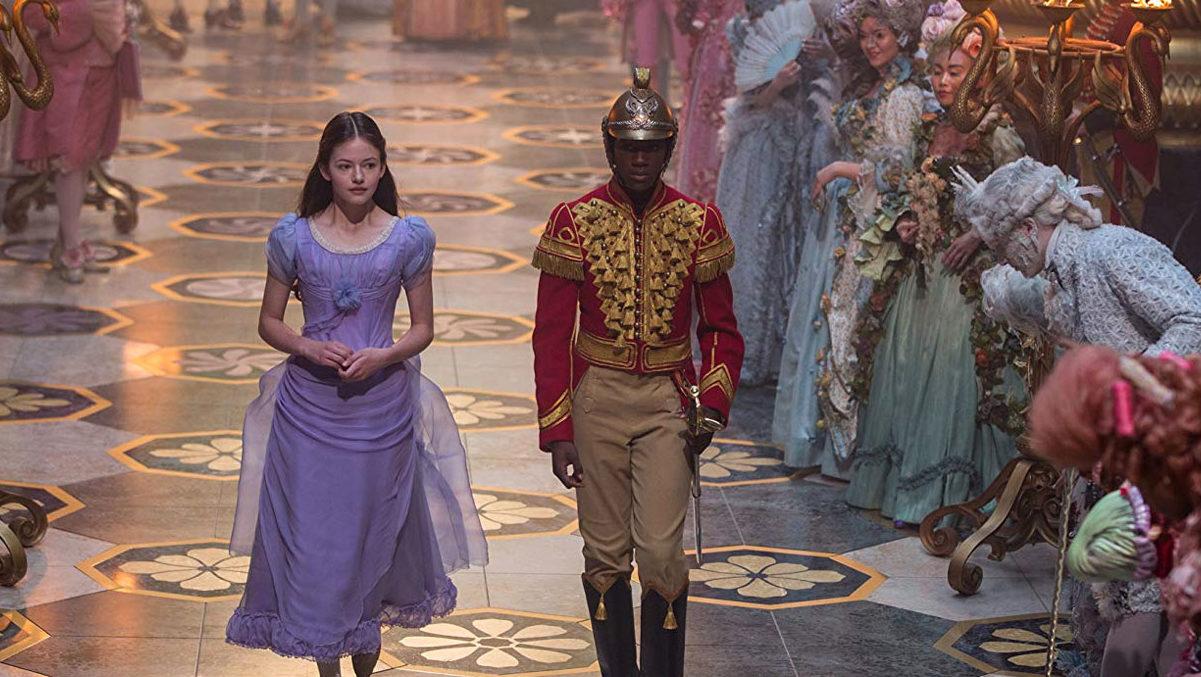 The Nutcracker and the Four Realms

The plot of “The Nutcracker and the Four Realms” follows the basic aspects of its source material. As in the ballet, the story follows a young girl named Clara (Mackenzie Foy) who gets transported to a mystical world of sweets and magic made up of four realms: the Realm of Sweets lead by the Sugar Plum Fairy (Keira Knightley), the Realm of Snowflakes lead by Baron Shiver (Richard E. Grant), the Realm of Flowers lead by Baron Hawthorne (Eugenio Derbez) and the Realm of Amusement lead by Mother Ginger (Helen Mirren).

Clara sets out to stop the villain, Mother Ginger, from destroying everyone. Clara’s mother also plays a much larger role in this version, being the queen and creator of the four realms and the people within them. This detail is hugely different from the original, in which none of Clara’s family knows about the world of the Nutcracker.

Foy as Clara is a perfect choice. Foy is known for her role in “The Conjuring” as Cindy and for lending her voice to the character formally known as The Little Girl in Netflix’s adaptation of “The Little Prince” book. Foy brings confidence to Clara’s character and offers a performance packed to the brim with emotion and power.

Another standout is Jayden Fowora-Knight (Phillip, The Nutcracker), whose only other credit to date is a minor role in “Ready Player One.” Despite being new to Hollywood, Fowora-Knight’s ability to add subtlety and believability to his character makes it seem like he’s been on the silver screen for years. Phillip starts out as a shy follower but gains confidence over the course of the movie. Fowora-Knight compliments Foy nicely and slowly brings the character out of his shell. In one particular scene in which Clara threatens to return home, Phillip implores her to accept her duty as the hero of the realms. Fowora-Knight brings a gentle confidence to Phillip in the scene, and that confidence is exactly what Clara needed to jump back into action.

Unfortunately, not everyone could pull out perfect performances like Foy and Fowora-Knight. Derbez is one such actor whose performance wasn’t quite up to snuff. Derbez is known for roles in movies like “Instructions Not Included” and “How to Be a Latin Lover,” but his work in “The Nutcracker and the Four Realms” is that of an amateur. Derbez spends the whole time trying to play the stuttering, flustered, airheaded Hawthorne, but the performance ends up feeling forced and annoying. Derbez’s performance is one of the only negative aspects of the film.

“The Nutcracker and the Four Realms” has fantastic costume work, more impressive than other live–action Disney movies. In the beginning, when the setting takes place in the normal world, all of the costumes are satisfyingly accurate to the time period and location. Characters don lovely Victorian-style ball gowns with flowery patterns, muted colors and hairstyles with coiled curls. In the realms, the costumes are as baffling and magical as the rest of the world. The Sugar Plum Fairy’s dress is a standout among the costumes. In all shades of pink and purple, it looks yummy enough to eat.

Another aspect of the movie that stands out from other live–action Disney movies is the CGI and green screen work. Although other movies by Disney have decent CGI, “The Nutcracker and the Four Realms” looks so real in some places that it’s scary. In the climax of the movie, Clara has to climb along the back of the castle, which hangs off a plunging cliff, with frothing, dangerous waters below. The visuals trick the eye impressively, creating the seamless illusion that Clara really is just one slip away from death. The computer effects are organic, and the fantasy world jumps off the screen.

Though the movie may stray from the story people know, it is still an amazing adaptation that deserves fair praise. From the impressive acting, breathtaking costume design and jaw-dropping CGI, “The Nutcracker and the Four Realms” is a whimsical and marvelous retelling of a Christmas classic.