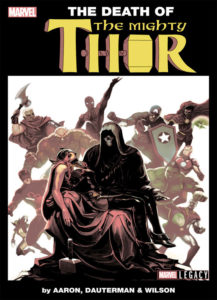 Out of all of the Marvel Legacy relaunches, the most exciting is the ambitious double-sized Thor 700th issue special.

The main plot thread follows Odinson’s battle to protect The Nornkeep from Malekith’s Army. This is to protect the tree of fate from falling into the dark elf’s hands.

Through the lens of this all seeing tree, readers are taken on a merry journey through the wild and colorful world of Thor. The stories go from Thor’s young adulthood all the way to the end of time. However, most of the stories occur during the present. These stories range from a battle between Thor and She-Hulk to the return of War Thor. Even Frog Thor makes an appearance.

Each mini story has its own artists and all of them do a fantastic job. However, there are too many stories being told n in too short a space. The past and future scenes, as well as Loki bonding with his father all feel superfluous and should’ve been told at a later date.

Overall, this is a really good issue. This book will also do a great job of reminding readers of all the various plot threads that have built up over the course of the series. 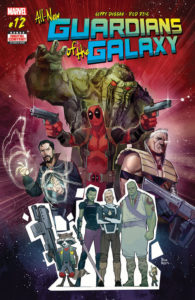 All-New Guardians of the Galaxy #12

Gerry Duggan begins the second arc of his Guardians of the Galaxy series and it’s shaping up to be even better than the first. The Guardians must find Infinity Stones which have mysteriously disappeared before Loki can find them. It’s a fun setup for an arc, and if this issue is any indication, Duggan will handle it well.

That being said, not a whole lot happens in this issue. The Guardians ask around Earth to see if anyone knows anything about the Infinity Stones, they pick up a few new friends for their upcoming journey and Man-Thing shows them a vision of other realities. That’s it. The whole appeal of this issue is seeing members of the Guardians bounce off random marvel characters. A few of the character appearances in this book feel forced but the delight of seeing Reis draw some of marvel’s most colorful characters makes the whole issue worth it. 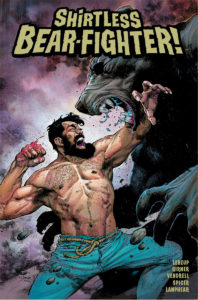 Shirtless Bear-Fighter, Image Comic’s craziest new book came to end this week. Shockingly, the idea of a naked man punching bear terrorists in the face wasn’t quite enough to sustain a full miniseries.

The first issue was full of hilarious puns and visual gags with charmingly one-note, over-the-top characters. The whole thing fell apart when the book started taking itself far too seriously. Instead of telling funny jokes the whole story was just bogged down in needless melodrama.

Making matters worse is the strangely overt and heavy handed message about clear cutting forests. Even when this series still tried to make some jokes most of them didn’t land. This is a huge letdown from highs set by the gut-busting first issue. The one saving grace of this finale is that the book still had one great bear pun left: “Save your strength. Bearamedics are on the way.”

At first this book seemed like it was going to be a zany fun time. Ultimately it proved to be a silly version of The Lorax.

Written and Drawn by Steve Skroce

Maestros is about a slacker wizard millennial named William. He learns that his whole family has been killed except for his mother so he has to take on his father’s mantle. It just so happens that his father was king of the Wizards, the people who created and can control the entire universe.

William comes off as a bit of a cartoon hipster, but Steve Skroce writes him in a way that feels natural. Despite a few logical hiccups, Skroce gives enough information for the concept behind the world to seem enticing yet not overwhelming.

This book also has a talking sword — that’s neat. Unfortunately, the book seems overly gory and sexual. Time will only tell if Skroce can make this into a positive aspect of the book. This was an entertaining first issue and this could easily become one of Image’s best new series.