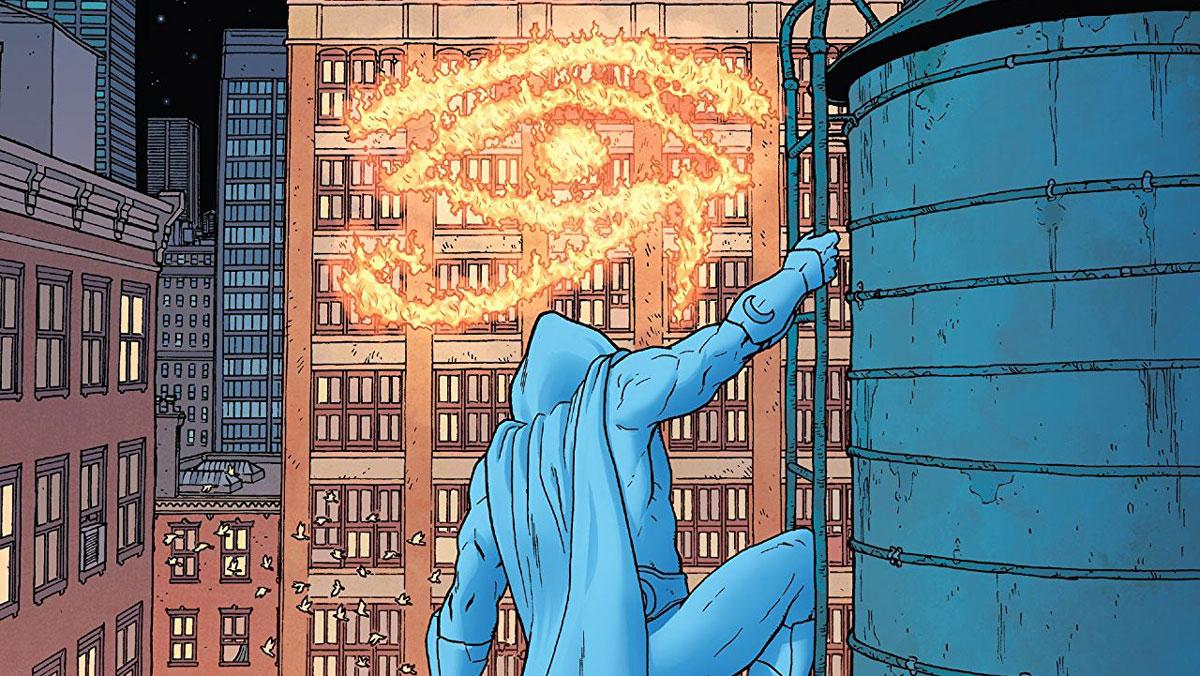 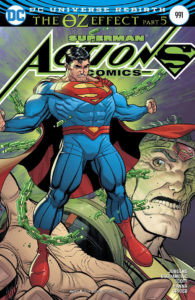 Throughout DC Rebirth, the Superman series has gradually built towards the Doomsday Clock event. “Action Comics #991” continues to do so. This latest issue wrapped up “The Oz Effect” story arc while offering one of the closest interactions between Superman and Doctor Manhattan thus far. Throughout this storyline, Mr. Oz, who was revealed to be Jor-El, has attempted to convince Superman that mankind is beyond saving. The concluding chapter to the story features a Superman that has somewhat agreed with his father’s assessment. The issue ends with Superman dejectedly accepting that people are losing hope before he flies away to “return to work.” Given that Superman is one of DC’s brightest characters, this is a drastic change for the Man of Steel. How this weakened optimism will affect Superman will be a crucial part of the character’s story going forward, both in the pages of this series and in “Doomsday Clock.”

The art overall is unnoteworthy, but one panel stands above the rest. Lois asks Superman about Jor-El’s prophecy that the world is doomed. The next page features a full panel of a crestfallen Superman overhearing various police reports of violence and other misery. This illustrates the shift in Superman’s philosophy, and it is the moment that he accepts Jor-El’s message. 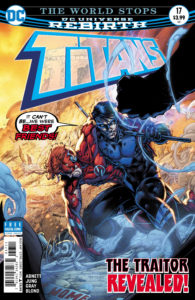 “Titans #17” offers a fascinating, albeit brief, examination of the painful consequences of love. Troia, a time-displaced version of team member Donna Troy, shows her younger self the life full of pain that awaits her. Using the Lash of Truth, Troia enables Donna to see the miserable destinies of her friends and the devastating agony of those losses. Gradually, Abnett executes a successful twist on Troia’s character. When she arrives, she is a dangerous, unknown foreigner. She pleads for the Titans to listen to her and she repeatedly states that she wants to help them. However, by the end of the story, she shows her true colors when she reveals her plan to end the world. Abnett takes a fairly common idea and manages to make it captivating. By the end of the issue, Donna has fallen to her knees, unable to fight Troia’s claims. Abnett’s analysis of love and loss makes “Titans #17” one of the more psychological issues of this series and DC Rebirth as a whole. 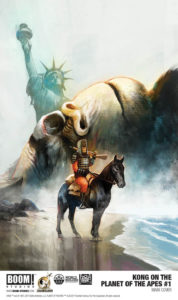 Kong on the Planet of the Apes #1

The original “Planets of the Apes” film is crossing over with “King Kong” in a standalone miniseries and shockingly, it’s actually great.

There’s an inherent zaniness to watching the characters from “Planet of the Apes” study the dead body of a Kong–sized ape before deciding to travel to Skull Island. Make no mistake, this is a deadly serious book. However, the serious tone actually works in its favor. The silliness in the concept is so inherent that it’s simultaneously charming and admirable that this book takes its world and characters so seriously. There are extended discussions about politics, science, a possible rebellion and the likelihood that this giant ape may be a god. This makes the world feel real even when the protagonists are intelligent apes being attacked by monsters.

Illustrator Ryan Ferrier’s art balances these serious and silly tones perfectly. There’s a dark realism to the work that pervades every panel, but he doesn’t shy away from showing a Kraken or pterodactyl in its full, exaggerated glory. It’s very satisfying to read a book that embraces the fun of its premise without forgetting to be intelligent and introspective. 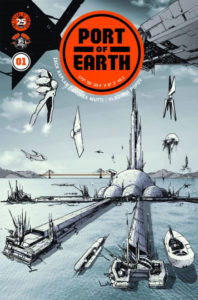 Writer Zack Kaplan may have actually found a fresh take on the alien invasion story. This time, the aliens don’t want to fight us. They just want to do business.

The Consortium, an alien fuel company that appears on Earth wanting to build an interplanetary fuel station using Earth’s water source. In return, humans are given the technology to turn water into fuel, ending the Earth’s energy crisis. Unfortunately, the situation quickly sours when more aliens start showing up and acting hostile toward humans. As a result, world becomes embroiled in a debate on how to stay safe and how to back out of the deal.

“Port of Earth” has some incredible world building, efficiently taking the readers around the world with cinematic art. There’s a grainy washed–out quality to this comic that makes it feel like a gritty, high–budget sci-fi movie. Near the end of the issue, readers are introduced to George Rice and Eric Mcintyre, a.k.a. Mac. They’re agents for the ESA, the new taskforce meant to keep humans and aliens safe from each other. Unfortunately, these protagonists just aren’t as interesting as the world they inhabit, and they come off as one dimensional “Lethal Weapon”–style buddy cops. Hopefully they’ll become more well rounded as the series progresses because everything else about this book is stellar. 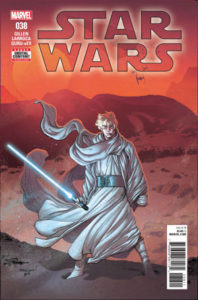 Following author Jason Aaron’s departure from the book, former “Darth Vader” writer Kieron Gillen has taken over “Star Wars” for Marvel Comics. This issue mostly deals with the ramifications of Jedda’s destruction in “Rogue One: A Star Wars Story.” The empire is mining kyber crystals from the remains of the planet while Han, Luke and Leia try to convince the disciples of Saw Gerrera to join the resistance.

One positive to this book is that Gillen understands the voices of the main characters. No one ever felt out of character. Unfortunately, illustrator Salvador Larroca’s art doesn’t work for this series. Everything is drawn in a semi-realistic style of cartooning, except for the faces which have a minutely detailed, hyper–shaded look that is clearly photo–referenced and clashes with everything surrounding it. This style makes every character look like a wax model.
Despite the change in writer, this series doesn’t seem to be moving in a new direction. Gillen is merely continuing the plot lines and tone of Aaron’s run. This is no doubt good news for fans of Aaron’s work on the series, but it’s utterly impenetrable for new readers, even if they read the recap page. 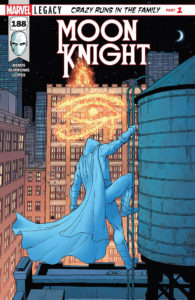 After writing “Worst X-Man Ever” and “Foolkiller,” writer, director and musician extraordinaire Max Bemis has been given his largest assignment from Marvel — “Moon Knight.”

This issue follows psychiatrist Dr. Emmett as she endeavors to understand her mysterious new patient, Patient 86. After being bullied by his platoon, Patient 86 burned them all alive. However, for a mass murderer, he oddly seems at peace and willing to get better. In her struggle to understand this man, Dr. Emmett introduces Patient 86 to Egyptian mythology. This was very thing that inspired her last patient, Marc Spector, to become the vigilante known as Moon Knight, as he believed he had been resurrected by the Egyptian God Khonshu.

Bemis does an incredible job here of portraying mental illness in a way that feels real but distinctively mysterious and scary. Bemis himself suffers from bipolar disorder and has even written a bipolar protagonist before in his series “Polarity.” These experiences have helped him craft a truly haunting tale that sets an amazing stage for this series. If this first issue is any indication, Bemis is more than ready to build on Jeff Lemire Moon Knight’s previous highly regarded run to create a truly fascinating and exciting stories for Moon Knight.

Deja View: Thor: Ragnarok and our hopes for Marvel’s future