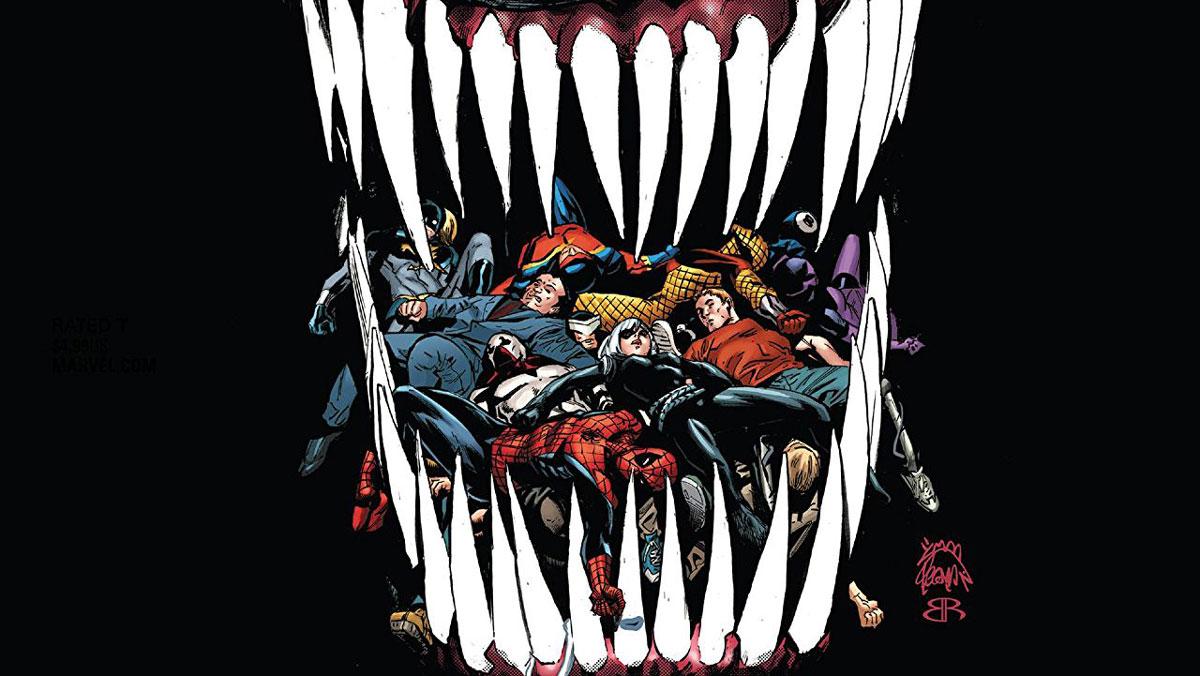 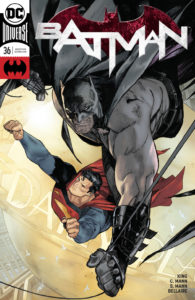 “Justice League #34,” starts strong, but fades fast.  The team must simultaneously deal with terrorists who kidnap nuns, an earthquake and an incoming alien invasion. Each situation is resolved, but one nun dies in the fight with the terrorists. Batman blames himself for the nun’s death, specifically his sleep deprivation, which is evident throughout the story, on her death. The moral of the story is delivered by Superman, who tells Batman that they saved many lives and that it’s okay to delegate leadership sometimes. These are two lessons that have been delivered ad nauseam in the superhero genre and even in previous Batman stories themselves. This issue of “Justice League” is not insightful or groundbreaking, which is one of the several reasons that it falls flat. 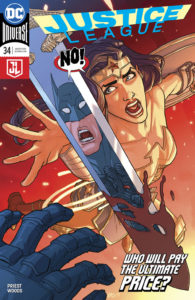 The issue begins with Superman weighing whether he should call Batman. The two characters are usually portrayed as close friends, but Batman has not told Superman that he is engaged. Batman’s failure to communicate with Superman shows a lack of intimacy in their relationship. As a result, Superman feels hurt, which he tries to hide from Lois. This is a humorously mundane problem for the Man of Steel. King successfully uses parallelism to illustrate the conflict. While Lois Lane attempts to convince her reluctant husband to call Batman, Catwoman is similarly discussing the matter with The Dark Knight. This parallel structure throughout the issue elevates the relationship between Batman and Catwoman. Having the two of them interact so similarly to Superman and Lois, one of DC’s most famous couples, Batman and Catwoman are elevated by association. This analogy is most evident later in the issue. In side by side panels, Batman and Superman echo each other in their admiration of the other, and they simultaneously say, “He’s just a better man than I am.” The relationship between Batman and Superman is one of DC’s most compelling, and in writer Tom King’s first exploration of it, he hits it out of the park. 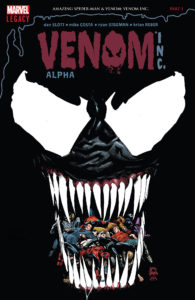 The last six years of Venom have built up to this: Eddie Brock versus Flash Thompson.

This issue sets up a citywide conflict centered around the symbiote. Flash Thompson’s venom-suited protege Mania is out fighting crimes when a mobster uses a sonic machine to separate Mania’s symbiote from her body. Later, Flash and Eddie Brock have a confrontation at Alchemex where Eddie has been receiving medicine to keep his venom-suit under control. Things escalate when Spider-Man shows up. At the same time, Mania’s old symbiote spreads through the crime world of NYC. There’s a lot of plot progression and exposition in this issue. Fortunately, the 30 page runtime lets all of the different story threads breathe.

Ryan Stegman is perfectly suited for this material. His expressive figure work and sketchy art style expertly sells the comedy of Spider-Man and the Cronenberg-esque horror of Venom. Brian Reber’s coloring elevates Ryan Stegman’s line work with vibrant colors that pop against the heavy blacks of Venom and his world.

Venom is a hard character to get right. The conflict between the symbiote and its host can easily fall into eye rolling melodrama and Venom’s stories often feel far too grim and gruesome for a Spider-Man book. Luckily, this crossover between “Venom” and “The Amazing Spider-Man” is embracing the absurdity of Venom to great effect. 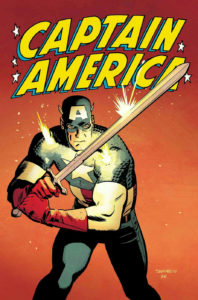 Steve Rogers is continuing his road trip around America, trying to find somewhere new to move. Unfortunately, during his stop in “Sauga River” near Atlanta, Steve must stop the new

Swordsman from flooding the town by unleashing its huge dam.

Mark Waid and Chris Samnee’s “Captain America” feels like a long forgotten silver age comic. This isn’t a bad thing. In fact, it’s downright refreshing in comparison to the more adult-oriented books which now make up the majority of comics released. It’s an added bonus that Waid and Samnee excel at telling quality straightforward and nostalgic stories.

The classic approach feels appropriate for Captain America. However, this series can only release so many simplistic one-shots in a row before it becomes monotonous. The series is only two issues in, but the tedium of using the same predictable storytelling structure has already started to set in. To make this villain-of-the-week approach more sustainable, Waid and Samnee should employ a strategy they used on their “Daredevil” run. In that series they would build up larger plotlines and character arcs in the background of one-shots to make readers feel like there was a real reason to keep coming back that wasn’t just Waid’s delightful dialogue and Samnee’s lovely line work.