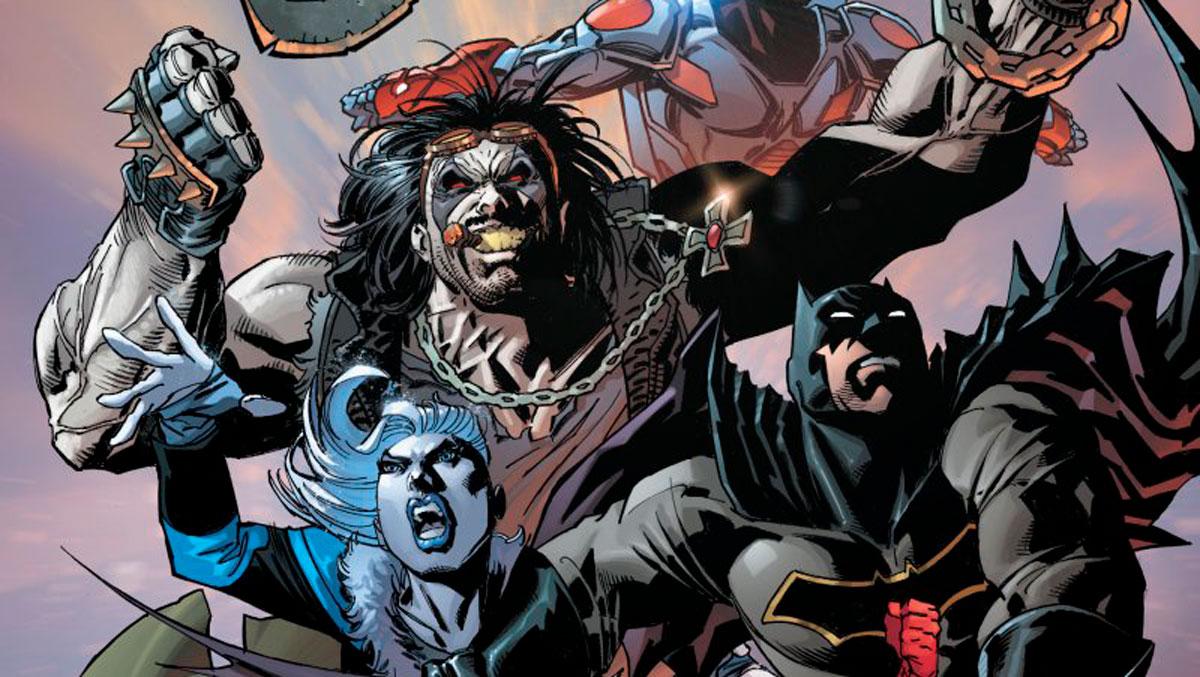 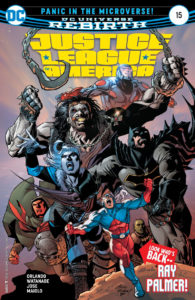 “Justice League of America #15” might remind readers of “Doctor Strange.” It looks great, but the depth of the story is insufficient. The story’s lack of substance detracts from the quality of the issue as a whole. Steve Orlando delivers a story, told in flashback, about The Atom’s journey to the microverse. This journey feels rushed, as the trio quickly travels from one planet to the next with very little development. However, the story is redeemed by its end. Here, Orlando packs a punch, as he unveils the true mystery of the microverse, ending the issue with a startling cliffhanger. Artist Felipe Watanabe juxtaposes vibrant, bright colors with dim, dark ones throughout the issue. That contrast makes the devastation of these storms more striking, as the reader’s eye is drawn to those bright colors. Watanabe uses these brilliant colors to capture the tone of a classic science-fiction space adventure. “Justice League of America #15” is worth a look due to Watanabe’s electric art, but the lack of a compelling story makes it a skippable issue. 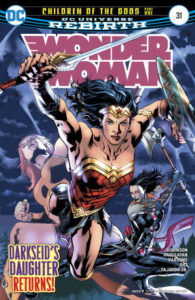 “Wonder Woman #31” sets the stage for a conflict between Wonder Woman and Grail, the daughter of Darkseid. The issue eventually shifts to a battle between the not-so mythical hero Hercules and Grail. Their brawl tears apart the environment around them, and artist Carlo Pagulayan makes this action more powerful by demonstrating the strength of these gods. For example, rock, magma and fire violently erupt from the earth when Hercules stomps the ground. The contrast of these dominant beings and the mundane forest around them makes Hercules and Grail stand even further apart from the human world.

The issue then shifts to Wonder Woman, who does not play a significant part in this story. This will upset readers that expect Diana to have an active role in each issue. However, Robinson efficiently sets up the story elements around Wonder Woman, which builds the foundation of the plot for the next few issues. “Wonder Woman #31” is a building block, it is the first chapter of a story arc about Wonder Woman’s connection to Hercules as well as Darkseid’s quest to regain his powers. As a result, it is light on character development and plot movement, but it is worth checking out for the establishment of the broader story that it begins. 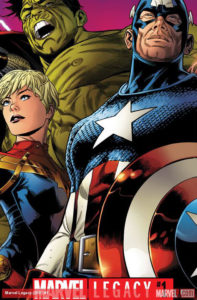 It’s no secret that “Legacy” is Marvel’s attempt to replicate the success DC had with their “Rebirth” initiative. This standalone issue, written by Jason Aaron with art from over ten artists is the introduction of the “Legacy” relaunch.

The issue is slightly shameless in how obviously it follows the formula laid out with the “Rebirth” special. Just like the DC book, this is a highly nostalgic set of vignettes linked together by omniscient narration, which tease toward the direction of Marvel’s top tier series. These stories all work well as enticing glimpses into a brighter future for Marvel.

While the book is effective, the similarities to the DC Rebirth Special does remove some of its impact. This issue also doesn’t focus nearly enough on the Avengers of 1,000,000 BCE. This is an intriguing team that unfortunately only gets a few pages of story.

Overall, this book is worth a read, especially if you want a glimpse into where Marvel’s flagship series are heading. For once, the future looks promising. 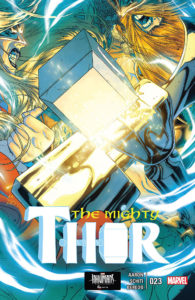 This issue wraps up the “War of the Thors” storyline. Jane Foster must stop Volstagg as he rampages through the Nine Realms. Volstagg has recently undergone a transformation to become the one and only War Thor which spells doom for all those who wronged him.

Jason Aaron gives an over-the-top story with real gravitas. His tempered approach to ridiculous subjects makes “Thor” feel less like a wacky ’80s adventure and more like a nuanced and thoughtful quest.

Artist Valerio Schiti and Colorist Matt Wilson expertly fuse a heavy metal aesthetic with a bright and bold sensibility. The art is a wonderful modernization of Jack Kirby’s iconic style.

It’s frustrating that this series has been teasing towards the “War of the Nine Realms” for a full twenty-three issues. Luckily, it seems that the wait may finally be over. In the meantime this is a great finale to possibly the best “The Mighty Thor” arc yet.