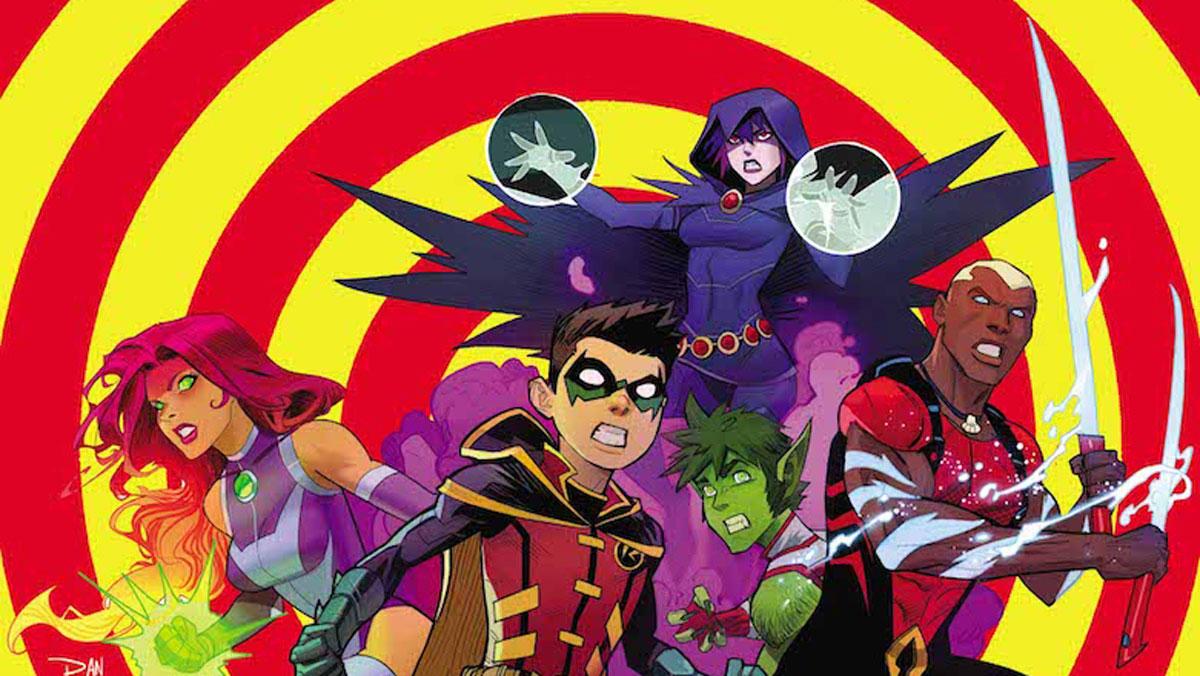 Staff writers Aidan Lentz and Colin Tessier are back with the reviews of the biggest comics from the last two weeks. 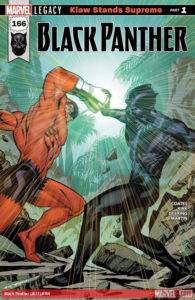 This issue takes a break from the current plotline to explore Black Panther’s oldest villain, Ulysses Klaw. At this point in his life Klaw is more god than a man. The whole story is just Klaw’s narration over his exploits around the earth with some flashbacks here and there. The most interesting aspect is Klaw’s love for his kind dead sister Julia and his hatred for his close-minded abusive father.

There’s a formal quality to the dialogue and narration that’s interspersed throughout Coates’ run. This works wonders sometimes and sounds awkward at others. Thankfully, this writing style is a perfect match for a character whose intellect has overridden his humanity. The only empathy that remains is in the memory of his Julia.

“Black Panther” is more interested in introspective monologues and ruminations on political theory than action. This approach doesn’t always work, and this series certainly isn’t for everyone. However, Ta-Nehisi Coates should be commended for sticking to his own artistic vision. 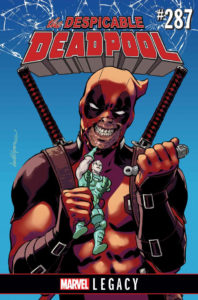 Deadpool has been blackmailed into a one-man mission to kill his oldest friend, Cable. Unfortunately for Deadpool, Cable was captured by time cops before Wade could finish the job. To save his family Deadpool must travel to the future and kill Cable before it’s too late.

Gerry Duggan is on a real upswing with his recent Deadpool comics. Ever since the series started its tie-ins to the Secret Empire event Wade’s life has fallen apart entirely. This darker direction could get in the way of Deadpool’s quirky comedy. Fortunately, Duggan has done a great job of presenting serious character development in the comic’s darkly comedic tone. This gives the proceedings a real sense of weight without getting in the way of the laughs.

Returning artist Scott Koblish is a perfect fit for this new direction. The sketchy, heavily-inked style is a great fit for the book’s gruesome script. Overall, this a must-read for any fan of the character. 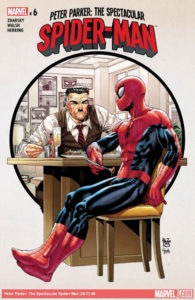 Jonah finally has his big scoop on Spider-Man; it’s just not what he expected.

In this issue, J. Jonah Jameson sets up an hour-long interview with Spider-Man. Peter must be interviewed to get information to help his spy friend Teresa. Unsurprisingly, things don’t go well and the two quickly fall into the same old arguments over vigilantism and which one of them is the bigger coward.

Zdarsky is trying to make a point about how fruitless Peter and Jonah’s relationship has been for the last sixty years. To accomplish this, he has both characters talk circles around each other, but both fail to truly listen. This makes for a compelling argument, but a stale read.

Peter’s characterization is too mean spirited and frustrated. Spider-Man would never call Jonah “tiny” and “worthless” even if he’s upset. Luckily, Zdarsky introduces a possible fix for Jonah’s stale status quo. This change seems promising even if his justification for it is slightly flimsy.

Overall, this series remains a solid, but inessential Spider-Man title — especially because this book was meant to provide a grounded counterpoint to the globetrotting “Amazing Spider-Man” title. Now that Peter is unemployed, it’s unclear what makes this book different from Amazing Spider-Man, other than moderately worse art and writing. 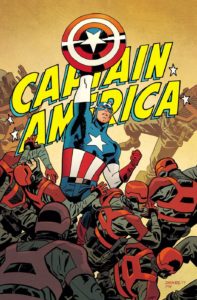 Mark Waid is back to write Captain America after his last mini-series for the character ended in 2011. Waid created one of the most praised runs for Captain America and if this first issue is any indication, there’s no reason to believe Waid won’t do this once again.

Chris Samnee was born to draw Captain America. He perfectly represents Steve Rogers as both a classic square-jawed, all-American man and a larger-than-life symbol of hope and optimism. This the third series that Waid and Samnee have worked together on, and it shows. Waid often keeps the dialogue to a minimum and lets the art do the talking.

Waid smartly plays off the rise of white supremacy in this issue, showing them white supremacists as the obvious villains that they are. The story is a simultaneously a cathartic and inspirational tale. This could come off as heavy handed, but the whole issue oozes a sort of wholesome earnestness which overcomes this potential problem.

The real Captain America is back, and he’s not a moment too soon. 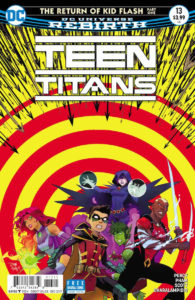 After the conclusion of  the “Gotham Resistance” crossover, “Teen Titans #13” returns the series to its self-contained status quo. The relationship between the team leader Robin and Kid Flash has been strained for several months because Robin kicked Kid Flash off of the team. This issue brings that conflict to the forefront. However, it recycles the team’s previous efforts to get Kid Flash back on the team. This time, each member discusses the necessity for failure in order to grow stronger. Robin’s refusal to compromise with his team shows that Robin remains the obstinate adolescent he was at the start of the series. Despite rare, brief glimpses of change, Robin has remained inflexible. The character has grown stale.

Andolfo’s art is a necessary shift from the often dark and gloomy colors used throughout the “Gotham Resistance” storyline. This issue features bright tones, which matches the lighter mood of the story.

“Teen Titans #13” is skippable due to its continued failure to advance the conflict between Robin and Kid Flash. “The Flash #33” is the first chapter of the “Bats Out of Hell” Metal tie-in story. This issue expands on the events of “Dark Nights: Metal #3,” and it analyzes the aftermath of Superman’s trip to the Phantom Zone. Williamson discusses The Flash’s conflicted mindset, while Barry fights to hold onto his trademark optimism, he finds himself in a world filled with his worst nightmares. This acts as a microcosm of the emotions the other heroes must be feeling in this hellish story. This consistent vulnerability makes the plight of the heroes resonate more with the reader, which makes it easier to care about the plot. 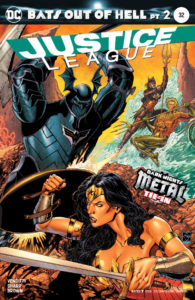 “Justice League #32” is the second part of the “Bats Out of Hell” Metal tie-in. Each Justice League member is trapped in an evil Batcave that is tailored to each of their skillsets. Each member of the team battles their Dark Multiverse doppelgänger and each conflict offers some intrigue. The issue is divided into short sections for each hero, but each feels rushed and underdeveloped. This compressed storytelling makes it difficult for the reader to invest in both the heroes’ stories and the larger story in the issue.

The art is unremarkable other than the font used for The Red Death’s dialogue. In an attempt to capture the distortion of the evil speedster’s voice, his word bubbles are filled with letters that look obnoxiously shaky and reflected. The Red Death’s speech is so difficult to read that it further inhibits the reader’s investment in the story. 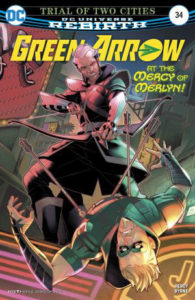 “Green Arrow #34” feels like an episode of “Arrow,” as it frequently mixes the present day with flashbacks. Early on, Black Canary tells Oliver that Team Arrow needs his help. Oliver is clearly conflicted, as his mother says she also needs him, too. This sets up a clash to take place in the next few issues, as Oliver will have to balance his duties as Green Arrow and as Oliver Queen, Moira’s son. This issue sets up a tenuous partnership between Moira and Oliver for the rest of the story arc. Most of the story feels like fluff because a significant portion of the pages are filled with subplots that are irrelevant to Oliver. 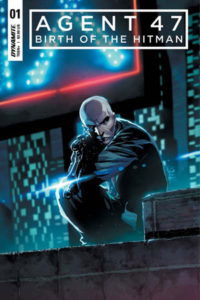 The first comic spinoff of the “Hitman” video game series began this week. As the title implies, this book acts as the origin story for the protagonist of the series, Agent 47.

Unfortunately, this comic doesn’t act as an effective window into the world of “Hitman.” Instead, this issue assumes that readers come in with a pre-existing knowledge and interest in the world and characters of “Hitman.” Without this knowledge these characters just come off as aimless and poorly defined.

There’s also a real lack of world building. Agents 6 and 47 work in an organization run by “doctors,” but what this organization is or does is never really explained. The only thing that’s clear about them is that they kill people for money. There’s an implication that they have a real influence on the world, but it’s not explored, nor are the Agents themselves. Minimal worldbuilding can make the reader want to learn more, however, this story doesn’t contain a central mystery. Instead the Agents just want to destroy the organization they work for without clear motivation to do so.

This comic offers little to fans of crime stories as whole. It may be interesting to hardcore fans of the series that want to learn more about Agent 47’s past, but it won’t satisfy anyone else. 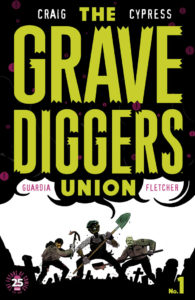 Grave Diggers Union is a fresh take on both apocalyptic horror-comedy and the superhero genre. It follows a group of ghoul-hunters that are charged with keeping the peace while the world suffers from ghost hurricanes, zombie hordes and more. However, the work they do isn’t flashy. These are just some blue-collar zombie hunters. Two of them are too old for this, and the other two are young hotshots.

Despite that, what’s the biggest problem in this world? Union rules and an increasingly apathetic public. There’s a real tongue-in-cheek moment where an unidentified person views the end of the world through their phone and just can’t muster enough energy to care.

Ultimately, this is a hard book to pin down. It goes from a surprisingly ambiguous prologue, to pointed political humor, to heartfelt characterization and finally to a conspiracy that goes all the way to top. The art gives readers the same wonderful lack of grounding. It’s gorgeous but also can become a bit too sketchy to fully understand.

Craig is doing a lot at once, and so far he’s managed to balance all of these elements.