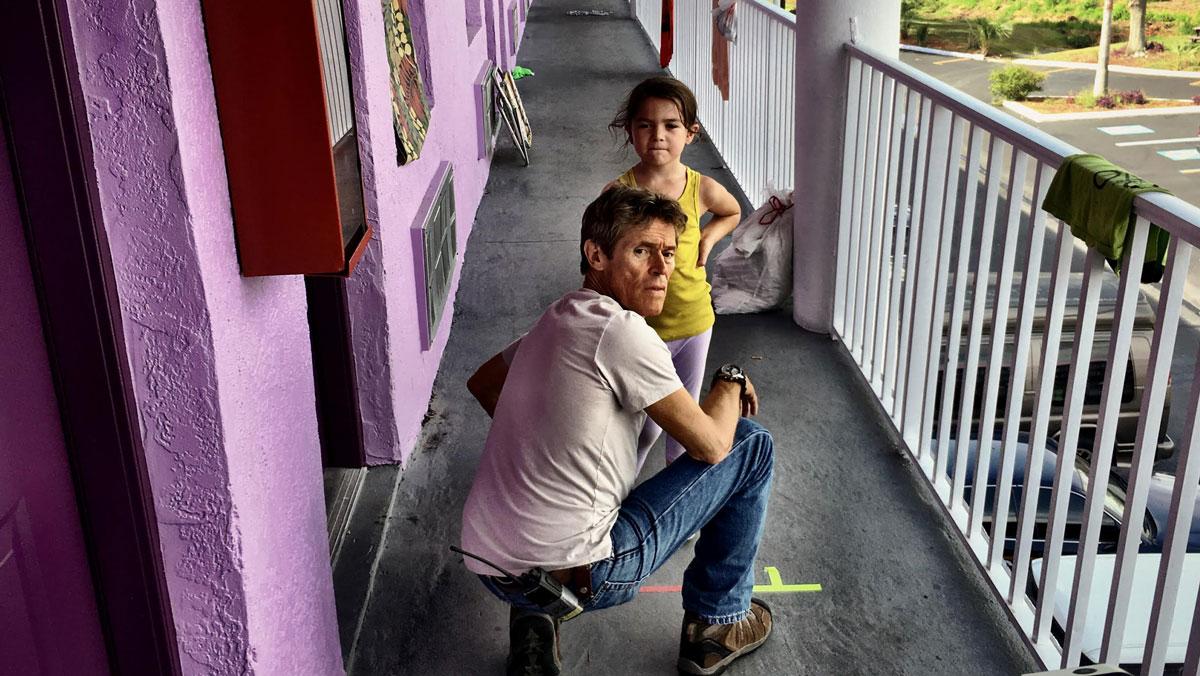 A24 Films
"The Florida Project" is the heartbreaking tale of a destitute mother and her wild child.
By Jake Leary — Life and Culture Editor
Published: November 6, 2017

When you think of Florida, chances are you’re thinking of Disney World. The big castle. The sweet smells of oranges and fried confections. The costumed employees masquerading as classic characters. It’s a vision of tourist perfection. But in the “The Florida Project,” Disney lies just out of reach, and instead of zany rides and picture–perfect memories, viewers are exposed to grungy motels and hard truths.

Set in a motor inn just outside of the famous theme park, “The Florida Project” centers on Halley (Bria Vinaite) and her trouble-making child Moonee (Brooklynn Prince). Bobby (Willem Dafoe) manages the motel and tries in vain to guide Halley to a better life. Character, not plot, drives the film, so it’s fortunate that, for the most part, writer and director Sean Baker has painted such a vivid, intimate portrait.

Halley’s blatant disregard for rules, order and general decency is both captivating and utterly heartbreaking. She doesn’t have a steady job and resorts to theft and prostitution to pay the bills, yet when she finally has cash in her pocket, she blows it on garbage. In one instance, Halley and Moonee are dancing their way through a dollar store after Halley makes big bucks off a set of stolen tickets. Moonee grabs a bag of novelty money — oversized, off–color — and places them in the cart with Halley’s chuckled approval. It’s an instance of a child raising a child, and both actresses portray this dynamic with subtle perfection.

Moonee acts with the unfiltered exasperation of a kid who thinks she’s wiser than her years. Prince’s comedic timing is better than many major adult actors, and it’s hard not to laugh at her deadpan justifications for her absurd antics. Moonee’s ideas and defenses are those of an adult, but her speech pattern is the unfocused ramble of a child. Much of Moonee’s colorful vocabulary comes from Halley’s unfiltered outbursts. Profane children will always be an easy source of comedy, and that theory holds true in “The Florida Project.” But it’s comedy with a purpose, and the actors never stumble into goofiness: There’s an elegance to the performances and the nuanced way the characters build on one another. The way Prince reflects Vinaite’s performance is yet another unexpected triumph: Moonee feels like an extension of Halley without feeling like a direct copy.

Vinaite deserves praise, too. She’s obnoxious and snotty, but never unlikable. The slow, drawling speech affectation paired with the bubble-gum popping sass and flippant gestures are recognizable to anyone with a friend who’s both destitute and naive. Vinaite injects a pathos into her portrayal of Halley that makes it easy to sympathize with her.

Surprisingly, Bobby is the only character who feels like dead weight. Dafoe’s performance is fine, and the writing is on par with the rest of the characters, but his story is given more time than it deserves. There are oblique mentions of his dysfunctional marriage and we see his problematic relationship with his son, but the subplot never gets resolved. As a result, the film slows to a crawl while Baker pauses the main story to check in on Bobby. “The Florida Project” is Halley’s film, so why not keep the focus on her?

Eventually, consequences catch up to Halley. She’s forced to confront the choices she’s made and the impact they’ll have on her daughter, who she genuinely loves. That’s the trick of “The Florida Project.” It’s a film about neglect, but not abuse. Halley loves Moonee and Moonee loves Halley, but neither is the best person for the other, and that difficult truth makes the inevitable climax that much more heartbreaking.

Unfortunately, the final moments of the film are undermined by a jarring change in production quality. The rest of the film is crisp, clear and smooth, but the end is choppy, like it was shot on a GoPro. There are justifications for this change narratively and logistically — the viewer is meant to question the reality of the ending, thereby justifying a different film style, but it’s such a leap that it feels like a mistake.

Despite its flaws, “The Florida Project” is a devastating viewing experience. Through all the moments of humor and all the wild adventures, there is a trace of melancholy in every scene. Just as Disney World masks the true nature of Orlando, Florida, so too does Moonee’s carefree spiritedness mask the bitter reality of an unstable existence.