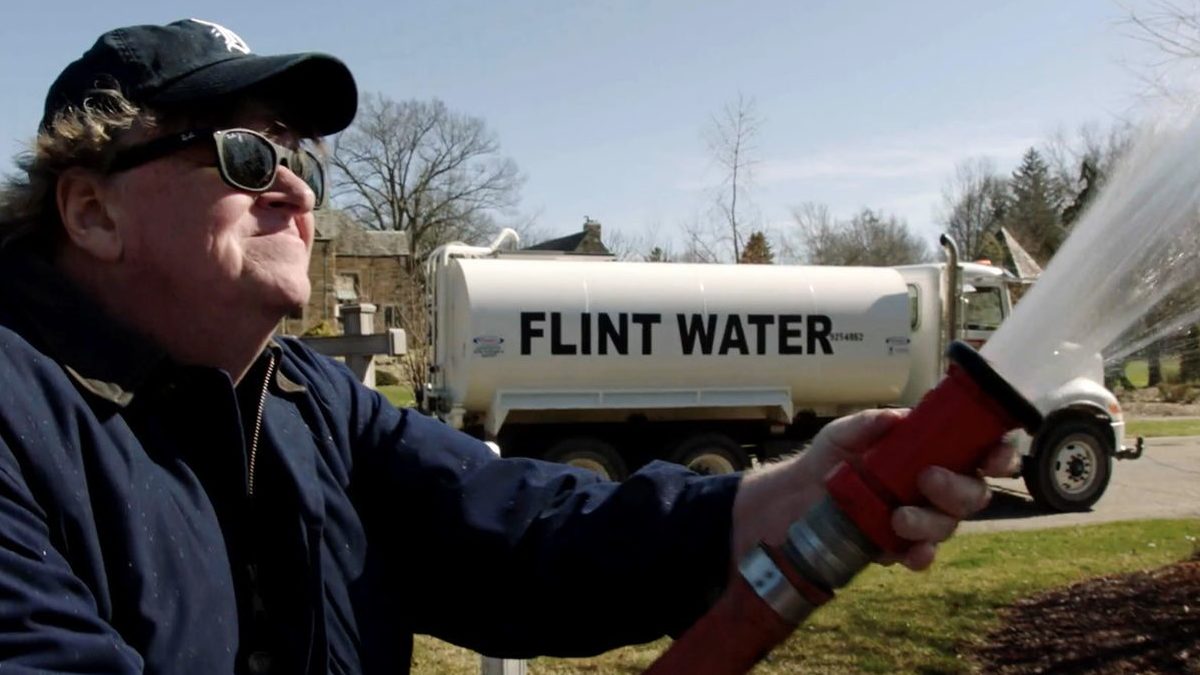 Moore’s depiction of the tragic events of the past few years is heartrending. Unlike most political commentaries, Moore doesn’t ignore the villainous actions from both sides of the political spectrum. He is able to represent major, polarizing social and political events — like the water crisis in Flint, Michigan, — of the past few years in a way that feels objective. Beginning on a lighthearted, comedic note, Moore brings the film around to end on a tragedy, while also including the slightest glimmer of hope.

The film begins by showing people’s reactions the day after President Donald Trump was elected, but contrary to the film’s marketing material, Moore wants to shed light on issues besides the Cheeto in charge. He wants the viewer to see that the disastrous political climate isn’t entirely because of Trump alone — it’s because of the people surrounding him as well. Specifically, Moore points to the people who allowed him to be elected, like the heads of every major news network giving him the free promotion that led to his election. Moore makes it a point to show that Trump does not do much besides spew lies and empty words — instead of doing anything himself, Trump appoints people to positions that will allow them to abuse their power.

Moore shows people from all over the country taking action in politics. One of the strongest parts of Moore’s film is how he not only includes interviews with people talking about what needs to change in the country — he shows them actually going out into their communities and enacting change. The most powerful example of this is when Moore addresses the issue of contaminated water in Flint.

Not only does he include footage of regular people making a change, but Moore shows himself doing something about the water crisis by going to the governor’s house to tell him how bad the water has become. Moore even goes so far as to spray a hose of contaminated water on the governor’s property. Many entertainers and artists are calling the people of America to action but would never actually get up and do something about it themselves. This inclusion helps validate Moore’s position: he really is doing all he can. One of the people Moore focuses on is a pediatrician from Flint. She provides frightening medical information about what the contaminated water is doing to people, accompanied by footage of her treating people. This proof contributes to the power of Moore’s narrative — that Americans are doing everything they can to fight for positive change.

Moore has produced an overall moving film focusing on issues surrounding Trump, however, there are moments when it feels like Moore is diverting from the focus, specifically when depicting the shooting at Marjory Stoneman Douglas High School in Parkland, Florida. The footage captured on students’ cell phones shown in the film is horrific and doesn’t allow the viewer to hide from the serious consequences that come from a lack of gun control. That being said, it feels like it was added at the last minute. Most of the film deals with the effects and issues around Trump, but the school shooting feels like it is a separate issue. Moore shows Trump talking about the shooting briefly, but other than that, there is barely a transition or connection to the first part of the film. It feels like he created a strong message about gun control, tacked it on to the end and attempted to connect it to the rest of the film at the last minute. While this segment of the film is still powerful, it doesn’t feel like the same film.

The most impactful part of Moore’s film is the way he criticizes people who are on the same liberal end of the spectrum as himself. The two best examples of this are when he shows footage of former President Barack Obama going to Flint, and when he portrays what he believes to be blatant cheating in the Democratic Party that promoted Hillary Clinton over Bernie Sanders. Moore plays heroic music as he depicts Obama getting off the plane in Michigan as if he arrived as the savior of Flint. He arrives, pretends to drink a glass of water in front of the people of Flint and leaves. Obama’s visit to Flint is shocking, offensive and upsetting. By this point in the film, the audience has spent enough time in Flint that they feel like they are part of the community, so Obama’s actions here feel personal.

Michael Moore has crafted a deeply moving and upsetting piece of work, showing the direct impact of the problems in our country that surround Trump’s election, rather than just talking about them. He also shows us why problems like the water contamination in Flint happen, which allows for greater context within the narrative. Most importantly, Moore criticizes both ends of the political spectrum and does not hold back just because someone is on the same side as he is.

“Fahrenheit 11/9” is a film that entices the viewer to take action, any action, that will help make America great, because it never has been.