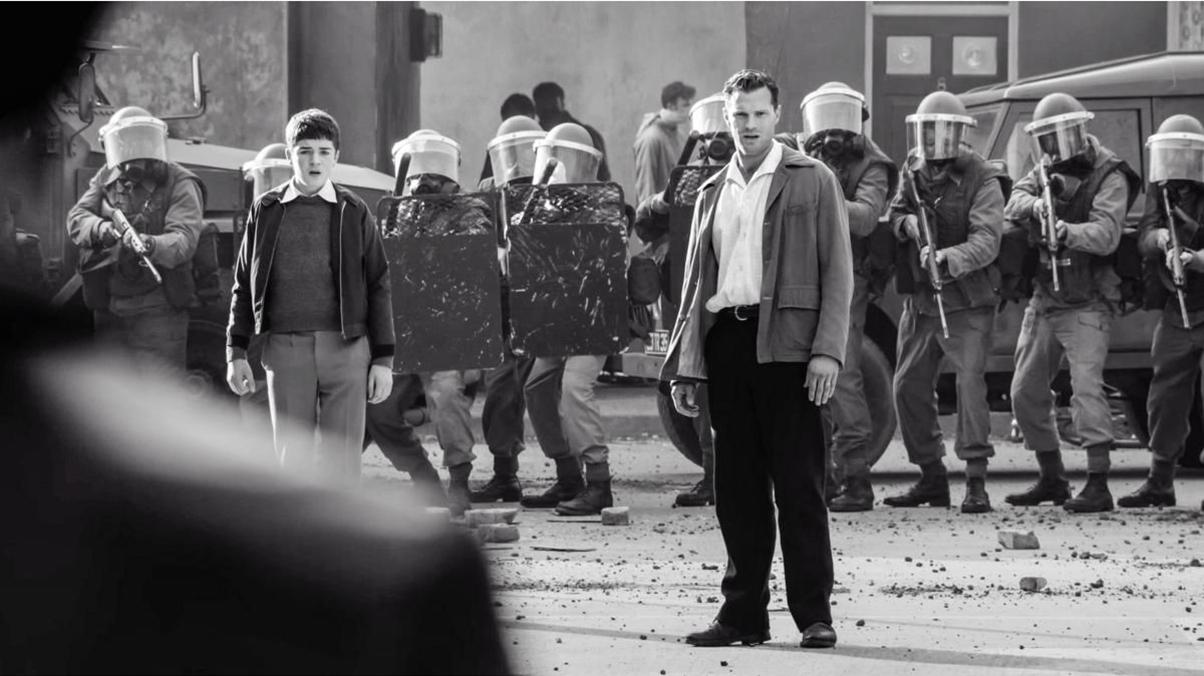 Courtesy of Focus Features
"Belfast" does an incredible job depicting the conflict between Protestants and Catholics in Northern Ireland through the life of a neutral family.
By Sydney Brumfield — Staff Writer
Published: November 17, 2021

Explosions shake buildings and barricades separate streets, all while children play soccer a few yards away in Kenneth Branagh’s “Belfast.” The film is a love letter to the city of the same name as it follows a mixed Protestant and Catholic community’s struggle to survive The Troubles that plagued Northern Ireland and Ireland, specifically in the late 1960s.

The film follows Buddy (Jude Hill), a 10-year-old who lives with his family in a community in Belfast composed of both Protestant loyalists and Irish Catholic republicans. Buddy’s parents Ma (Caitriona Balfe) and P a (Jamie Dornan) work relentlessly to keep this performatively-Protestant family neutral in the outbursts of mob violence while trying to provide Buddy with a normal childhood. In a time of chaos in Belfast, Buddy and his family remain impartial to the ongoing conflict, which conveys the theme that community should trump politics.

“Belfast” is a beautifully sincere story depicting a truly tumultuous time in Irish history from the household perspective. Buddy’s family serves as a reminder that throughout this violent period in Belfast, people were trying to maintain the simple experiences of life: loving, laughing, mourning and grieving. Branagh perfectly contrasts spine-tingling scenes of riots and eruptions with truly joyful moments like Buddy working to gain the attention of his first crush in grade school.

Branagh creates candid moments of comedy that felt realistic and rooted in the story. A huge part of this are the characters who poignantly depict loving, timeless and quirky tropes of the traditional family relationships. Buddy’s rich and deeply personal connection with his Pop (Ciarán Hinds), Granny (Judi Dench) and his parents allow for amusing interactions to occur surrounding Buddy’s childlike curiosity. None of this would have been possible without incredible performances from all actors, most notably Jamie Dornan and Caitriona Balfe. The pair captivate viewers with their portrayal of the best and worst that can come of marriage.

The look of “Belfast” is outstanding. The framing of shots look like pictures or stills taken directly out of the 1960s. Branagh fully utilizes the depths of scenes, placing characters staggered throughout a still shot, only to have them reveal themselves when their line of dialogue is delivered. The camera remains stagnant as Buddy and Pop talk outside about Buddy’s budding crush on a classmate while Granny has been sitting inside, framed by the open window the entire time, but the audience is never directed to look her way until she speaks. This technique makes the audience feel as though they are gaining a personal look into the daily lives of the characters making each shot both engaging and authentic.

“Belfast” is dominantly in black and white as Branagh utilizes color in specific scenes. Aside from the beginning and ending shots of modern-day Belfast, television programming, plays and movies are the only times color is added to scenes. This beautifully relays to the audience how impactful these forms of escapism were to Buddy as a child living amongst so much hatred.

Branagh handled the difficult topic of religious differences and civil unrest with grace and skill. “Belfast” is a tender telling of how people continue to look for moments of light in times of hardship.