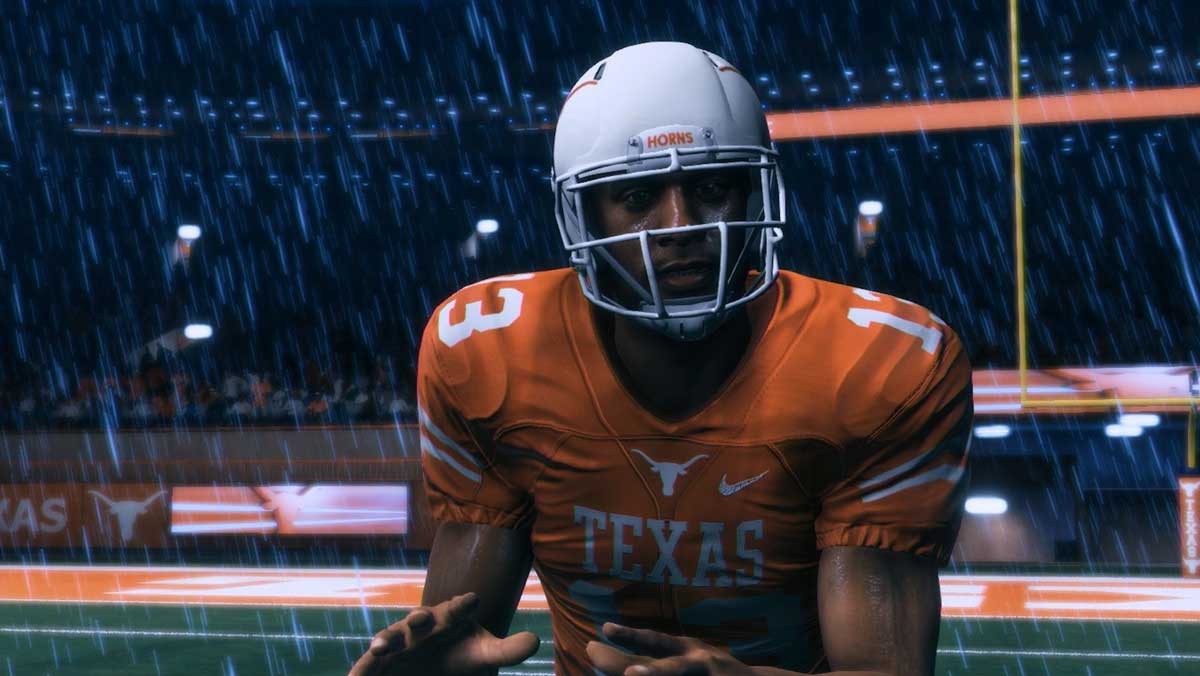 Electronic Arts
For the first time, “Madden” has a story mode. Devin Wade (JR Lemon) leaves his football career behind after the death of his father (Mahershala Ali). Years later, Devin re-enters the world of football to try to make it to the NFL. Electronic Arts
By Silas White — Assistant Life and Culture Editor
Published: September 12, 2017

Sports superstars are surrounded by their own mythos — they’re treated like gods or superheroes. Football diehards worship the ground that the greats walk on. It’s rare to see football players vulnerable or broken.

Welcome to Longshot, the new story mode in “Madden NFL 18.” A first for the series, Longshot is much more than Career mode with cinematics. Instead, players take the role of Devin Wade, (JR Lemon) an NFL hopeful who quit football in college following a family tragedy. Several years later, Devin attempts to make his return.

The story is much deeper than one might expect from a football video game, focusing heavily on player choice, much like Bioware’s “Mass Effect” or Telltale’s “The Walking Dead.” The bond between Wade and his best friend Colt Cruise (Scott Porter) is quite touching. There’s a scene where the two sing along to Miley Cyrus’s song “The Climb” as they travel to Indianapolis. The scene is equally silly and heartfelt.

The story makes players feel a great deal of responsibility, as if each decision has weight behind it. There’s a section where Wade’s coach is trying to teach him how to recognize formations and call his own plays, and without any training, the player is expected to get the correct answer. The goal is to make the player feel helpless and inexperienced, because Wade is helpless and inexperienced. As a narrative device, it really works.

Longshot also tackles topics in football that “Madden” has never explored before. It shows human struggle and emphasizes the camaraderie between teammates. For players with a passion for football, it’s a reminder of why they fell in love with the sport.

That’s not to say that Longshot is flawless. Other than Wade, many of the characters fall into sports movie stereotypes. There’s the sleazy TV executive, the no-nonsense coach, the overconfident and obnoxious rival and, of course, the female lead devoid of any personality. Similarly, Longshot doesn’t feature any of the darker sides of the sport: not once during the roughly four–hour story will you hear the word “concussion.” Still, the story accomplishes what it set out to do. It tells an endearing story about football.

The introduction of the Frostbite engine is welcome. Animations look more fluid than ever, especially at the line of scrimmage. Lighting and shadow effects are impressive — one can see referees squinting when they come out to call penalties. Facial animations still aren’t perfect and occasionally dip into the uncanny valley, but they are better than they’ve been in years.

Play Live mode makes its debut and allows players to jump into weekly games as they occur during the actual season. For example, players can jump right into the Cowboys and Giants game during week one of the regular season, using the starting lineups from that week. Then, if they want to continue, they can start a Franchise mode where they play out the rest of their chosen team’s scheduled games.

“Madden NFL 18” introduces a new mechanic this year called target passing, but it has few practical applications. Using the feature, players may control a moveable target and pass to a specific point on the field rather than throwing to a receiver directly, but the mechanic is unwieldy, and the timing is difficult to master. It’s unclear why one wouldn’t just throw to their favorite receiver normally, by tapping or holding the corresponding button.

The game also introduces three new modes called Arcade, Simulation and Competitive. Arcade mode is all about big plays and heavy scoring, and it’s the best mode for bragging rights among friends. Simulation mode is the most true to actual football and aims to make matchups between teams as true to real life as possible. The last mode, Competitive, puts a big emphasis on player skill, such as ball–hawking and stick moves. This is the default mode for head-to-head multiplayer.

Overall, “Madden NFL 18” is worth the $60 price. Longshot is a well–executed shakeup to a series that is often criticized for staying static. The Frostbite engine really brings the visuals to the next level, but unfortunately, EA Sports missed the opportunity to make meaningful changes to gameplay.