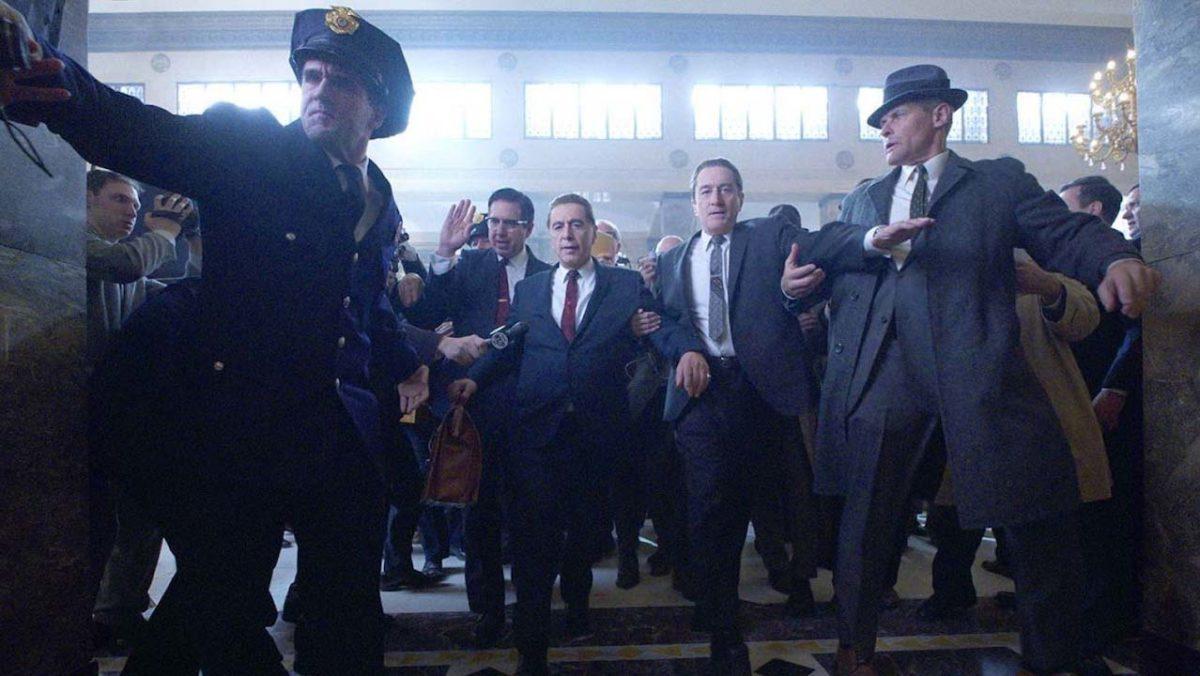 Courtesy of Netflix
Martin Scorsese's "The Irishman" features an honest look at how violence affects the life of hitman Frank Sheehan, stunningly portrayed by Robert DeNiro. The film is a testament to DeNiro's and Scosese's history together, as well as a masterful drama.
By Elijah de Castro
Published: December 12, 2019

When compared to the other films Martin Scorsese has made during his 50–year career, “The Irishman” is his most rewarding. It is a sprawling, subtle reflection not only on his own career but his frequent collaboration with leading man Robert DeNiro. The film feels like the summation of everything they have built, mastered and created together. It is a thoughtful three–and–a–half–hour–long study of a gangster working under labor union leader Jimmy Hoffa (Al Pachino).

The film follows Frank Sheeran (DeNiro) through three decades of his life as a mob hitman. He is eventually torn between an alliance with legendary labor leader Jimmy Hoffa (Pachino) and mob leader Russell Bufalino (Joe Pesci). Beginning as a small–time truck driver, Frank is introduced to Russell at a gas station, and from there, his presence in the mob scene grows.

“The Irishman” excels at communicating the impact of being in the mob over a 30–year period. Throughout the film, DeNiro, Pachino and Pesci dial up the aging of the characters ever so slightly scene by scene. As they age, they become slower and shaky so subtly it almost goes unnoticed until well into the film. While the story of the film could have been told in a two–hour film, the runtime captures the psychological repercussions of being a lifetime gangster. Scorsese moves seamlessly through this life, toning down his style and emphasizing substance.

While the film’s moody colors and smooth camerawork are complementary, the cinematography is much more toned down and mature when compared to Scorsese’s earlier films. While some might criticize Scorsese for staying within the gangster genre and not trying new things, this is not a weakness of the film. Rather, it is that familiarity that allows Scorsese to dig deep into the characters. The gangster story is Scorsese’s area of expertise, and in “The Irishman,” he approaches this with self-awareness.

The most self-reflective theme Scorsese explores is how gangster stories avoid depicting the decline in sanity that would come with living a life of crime. Would hitmen brush off killing people as quickly as they are portrayed? In “The Irishman,” Scorsese humanizes Frank by departing from the themes of mindless excess that is present in “The Wolf of Wall Street” and “Mean Streets.” As Frank and Russell age, they become more broken down and shaken, revealing the humanity of someone trapped in the inescapable world of crime. This unseen empathy is a breath of fresh air, and the suspense of the film is tenderly spread throughout the runtime.

The score ties the film together, matching the themes and even the aging of the characters. Composer Robbie Robertson crafted an omnipresent theme that is relaxed and steady, and it looms over every scene. As Frank ages and grows more conflicted by his allegiances between Hoffa and Bufalino, the cello gets deeper and slower. As his family pushes him away and he faces isolation in his old age, the score follows.

While the runtime is certainly a commitment, “The Irishman” is a rare film in which every scene is a slow build to something greater. The film is smooth and polished, rolling along with crystal clear intent. The vulnerability depicted is a new achievement to be added to Scorsese’s film catalog. Watching “The Irishman” will be like Christmas for longtime Scorsese viewers, and, for new viewers, it will be a unique and challenging experience, albeit a slow and thoughtful one.