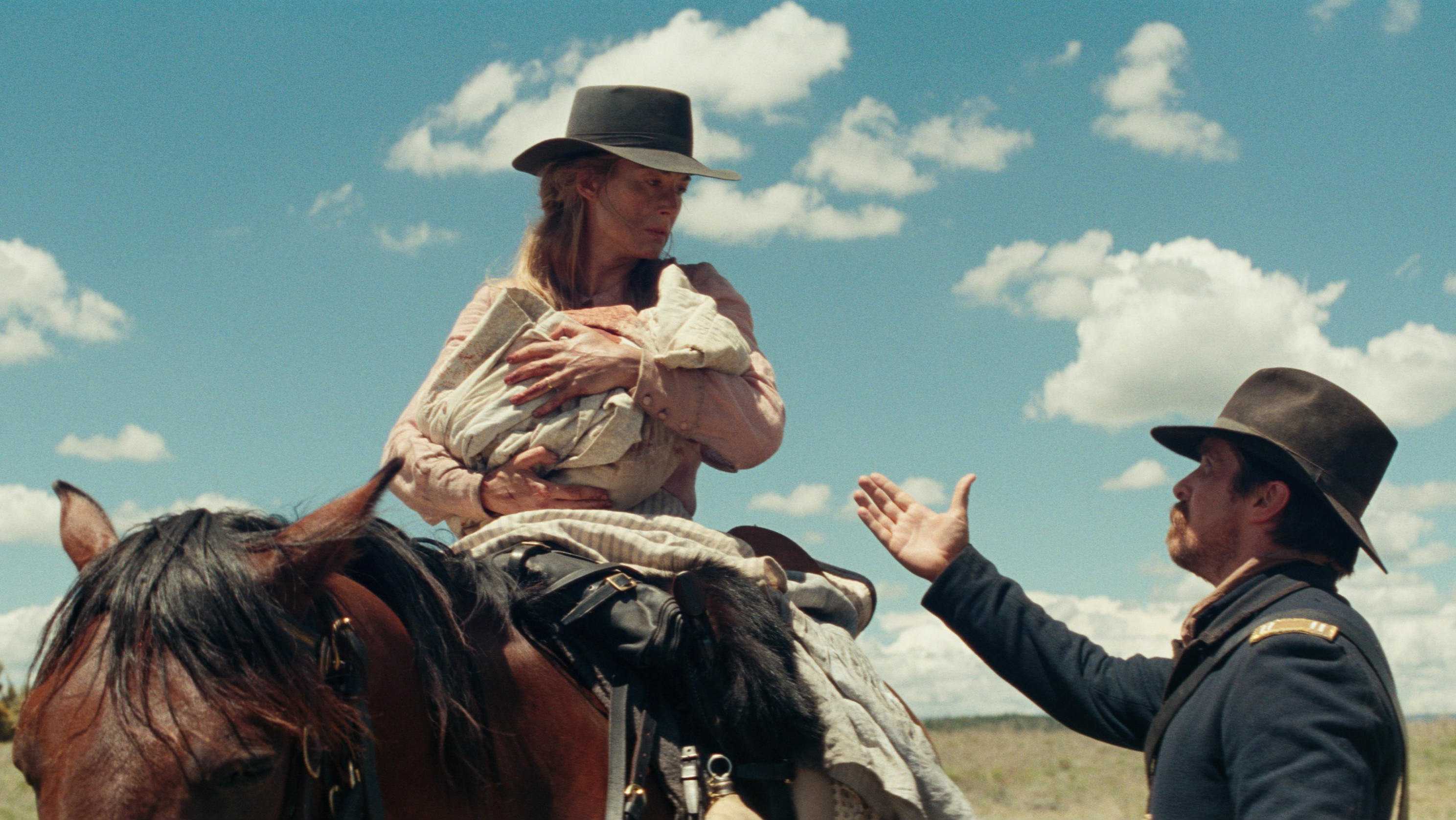 Waypoint Entertainment
“Hostiles” is about Captain Joseph J. Blocker (Christian Bale) and his small unit of soldiers as they escort a Cheyenne war chief and his family to their tribal lands, across dangerous territory.
By Michael Friedman — Contributing Writer
Published: February 6, 2018

An old cabin sits quietly on a grassless plain. A man is outside sawing wood. Cut to the inside of the cabin, where a mother teaches her children grammar while her baby sleeps next to them. Suddenly, Comanches riding horses appear on the horizon and mercilessly slaughter the whole family except for the mother, Rosalie Quaid (Rosamund Pike), who finds safety in a nearby forest. In this opening scene of “Hostiles,” director Scott Cooper tells the audience that this film is going to be bleak. Cooper puts together a visually appealing film, but pacing and character issues hold it back.

Starring Christian Bale and Rosamund Pike, “Hostiles” is about Captain Joseph J. Blocker (Bale) and his small unit of soldiers. Together they must escort a Cheyenne war chief named Yellow Hawk (Wes Studi) and his family from a fort where they were being held prisoner at to their tribal lands, across dangerous territory. The danger comes in the form of the Comanches, who will kill anything they see along the trail. Along the way, the group finds Rosalie. She is cradling her deceased baby when Joseph and his team go into her house; her sanity has clearly declined from her warm nature in the beginning to a broken state of mind. Joseph sympathizes with her and takes her in.

After the intense opening scene, the pace of the film comes to a grinding halt. The first half of “Hostiles” is painfully slow. There is a short action sequence sprinkled in, but it isn’t until the second half of the film that it starts to deal with heavier subject matter, such as mental illness, and becomes heartfelt. The lack of character development is an issue throughout, especially with the native family being escorted. They are supposed to be somewhat sympathetic characters — not so much Yellow Hawk, because he is a murderer, but as far as we know the rest of his family did nothing wrong. So why don’t we feel sorry for them? Quite simply, it’s because we don’t know them. The film doesn’t spend any time fleshing them out and making them sympathetic. Joseph is one of the only characters who has a character arc. He starts out as a man who is stuck in the past, but as his journey goes on, he becomes more optimistic. It’s a fairly on–the–nose message, but at least it’s there.

Despite the lack of character development, the acting is one of the best aspects of the film. Most of the characters are troubled and have dark pasts that the audience is given hints about. Bale gives a powerful performance as a man so focused on the past that he can’t learn to accept the present. He perfectly captures a cold-blooded, heartless character who only wants pain for the Comanche natives. Pike is enthralling and intense. Her appearance of shock and her body language when she is found by Joseph is heartbreaking. However, during the more emotional scenes, such as when she has to bury her family, her cries of anguish sound fake. The viewer is waiting for her to break down, but she doesn’t — she simply stands there and moans. It comes across as unintentionally comedic during an otherwise gut-wrenching scene.

Some of the best aspects of the film are its breathtaking cinematography and beautiful score. When the characters are moving from one place to another, there are beautiful shots of the mountains, forests and rivers. These scenes are peaceful and necessary to counter the unsettling nature of the rest of the film. Accompanying these scenes is a moving score by Max Richter. The score is simple, but the piano and violins blend together to create a melancholy feeling that helps take the viewers’ minds off the harsh reality they are being shown. Cinematography and score can make or break a film, but both are top notch.

“Hostiles” has pacing that will make a snail fall asleep and a cast of flat characters. However, the second half of the film raises thought-provoking questions, and its performances and cinematography make it worth watching.