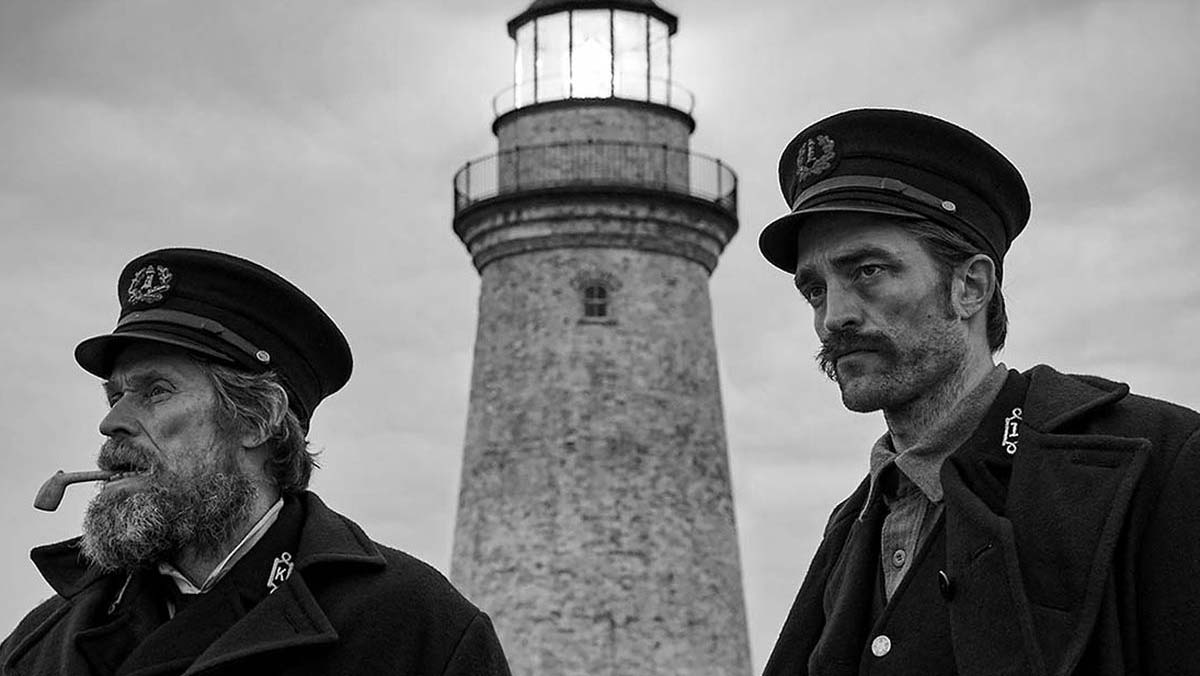 A24
Director Robert Eggers' creative mind is on full display in "The Lighthouse," a film that follows the power dynamics between two men on a remote island in New England. The film balances grotesque horror with genuine thrills, and both are aided by Pattinson's and Dafoe's acting.
By Liam Conway — Staff Writer
Published: October 30, 2019

Grotesque but beautiful, Robert Eggers’ latest film is a focused character study that showcases Eggers’ bizarre mind. Starring Robert Pattinson and Willem Dafoe, “The Lighthouse” tells the story of two men working at a lighthouse in a coastal New England town in the late 19th century.

The film deals with Thomas Wake (Dafoe) and his apprentice, Ephraim Winslow (Pattinson), as they work together in isolation from the outside world. Working at the lighthouse causes the two men to develop a codependent relationship that is plagued with hostility. Much of the conflict comes from Ephraim’s desire to go to the top of the lighthouse despite Thomas’s resistance. “The Lighthouse” showcases brilliant performances that carry the audience throughout a witty and often very dark story.

The film touches on themes of mental health, and, more specifically, how one’s mental health would be affected when left in the same place with the same person for too long. If Pattinson’s acting ability was ever in question, this film is proof that he is one of the greatest actors working today — emphasized, of course, by the glorious mustache he grew for this movie. Dafoe’s talent to unsettle the audience is unprecedented, and his looming presence as Thomas in this film is felt in every scene. And while the two actors are terrific in their own right, they thrive when they are together. Some of the greatest moments in the film come when the two men are drinking, wrestling and singing together after a long day’s work.

Following the release of “The Witch,” Robert Eggers’ work has made its way into the limelight, and “The Lighthouse” feels like a defining moment in his filmmaking career. He is a director who values form, which helps his films establish an unsettling tone even when nothing is clearly wrong in the narrative. For example, “The Lighthouse” is presented in black and white with a 1.19:1 aspect ratio. This creates a claustrophobic, old-timey feeling that constantly reminds the viewer they are watching a film. Unlike most American movies, “The Lighthouse” doesn’t seem concerned with immersing the viewer and instead takes pride in how alienating it is.

“The Lighthouse” is one of the most tonally distinct films to come out this year. The film feels almost like if Wes Anderson tried to make a horror film, with its quiet tone and bizarre moments. This film is not tame, and it has many scenes that graphically depict bodily functions. But while Eggers’ latest film is unsettling, it simultaneously entices the audience while also pushing it away. With visionary directing from Eggers and fantastic performances from Dafoe and Pattinson, “The Lighthouse” stays with the audience long after it has left the theater.