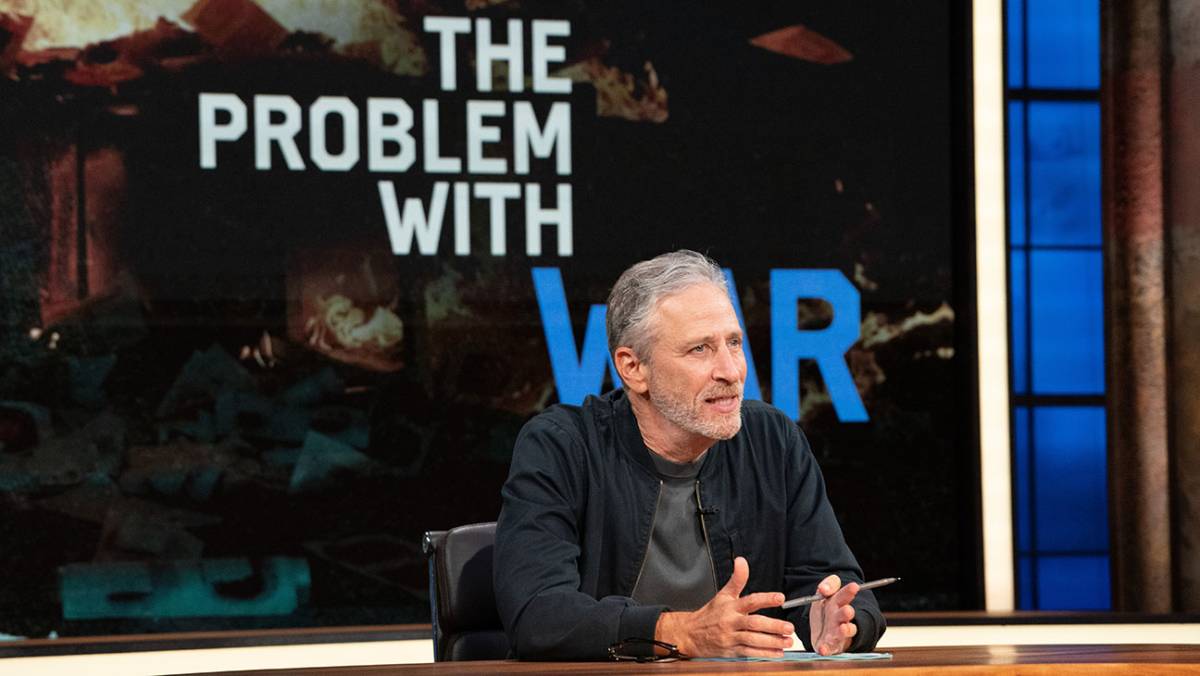 Courtesy of Apple TV+
Having embraced his age and his deepened empathy, Jon Stewart has made a timely return, leaning away from light humor and into passionate activism.
By Elijah de Castro — Assistant Life and Culture Editor
Published: October 16, 2021

The Problem with Jon Stewart

Since leaving “The Daily Show” six years ago, New York comedian Jon Stewart has aged like a fine wine. Throughout the Trump–era, Stewart made occasional appearances on his colleagues’ talk shows and began to show a more mature and sensitive side of himself. In his new biweekly Apple TV+ show, “The Problem with Jon Stewart,” Stewart’s ripened empathy is the show’s top priority, forming a tasteful new flavor for one of America’s most influential and trusted talk show hosts.

The first episode of “The Problem with Jon Stewart,” which was released Sept. 30, is titled “The Problem with War.” The show’s pilot digs deep into the issue that Stewart spent his hiatus championing — the treatment of American veterans. After a quick and ironic acknowledgement of how he has aged since leaving “The Daily Show,” Stewart gets to work. The first episode sees Stewart run a panel with retired Lt. Roy Torres, retired Sgt. Isaiah James, retired Sgt. Wesley Black and their respective families. During their service, the U.S. military used burn pits as trash disposal during the war on terror, dumping jet fuel onto heaping piles of anything it deemed trash — from nuclear waste to human waste.

The humor present in “The Problem with Jon Stewart” is brief, affable and delivered with Stewart’s classic expressiveness. However, Stewart seems to want to use his humor as a supplement for the exploration of deeply somber material. In his panel with the survivors of military burn pits, Stewart listens thoroughly to the stories of what the veterans describe as “a living nightmare.” Stewart’s eagerness to give them an audience to speak to is staunchly warmhearted.

“The Daily Show’s” goofy, bite-sized news satire is what gives it such a strong appeal — something Trevor Noah has maintained since taking Stewart’s place in 2015. However, one of the slept-on legacies of “The Daily Show” was Stewart’s ability to humiliate the worst of the worst on his show in sharp, candid interviews. From his interviews with war-mongering journalists like Judith Miller to sleazeball, Fox News hosts like Bill O’Reilly and Tucker Carlson, Stewart has an iconic portfolio of takedowns.

“The Problem with War” makes it clear that Stewart will continue and perhaps expand upon this tradition. The end of the episode has Stewart sit down with Denis McDonough, President Joe Biden’s Secretary for Veterans Affairs (VA), for a merciless interrogation. The VA, which has infamously denied healthcare coverage to veterans with chronic health problems, has his reputation put on the line as Stewart backs McDonough into a corner. Squirming in his seat while trying to maintain his composure, McDonough attempts desperately to avoid admitting that the denial of coverage to veterans is nothing other than greed. Plainly, any audience member will see through him. Uncorrupted and primed for the knife fight, Stewart lampoons McDonough’s snooty and evil composure with earnest, compassionate questions.

Despite this, “The Problem with Jon Stewart” is not an entirely graceful return. Some segments of the show feel thrown together, specifically the cursory introduction. However, as he did with “The Daily Show,” Stewart will sort through these issues with time.

Whichever issues Stewart explores next will be interesting to see, as many political issues that were taking place during his tenure at “The Daily Show” have taken new, frightening forms. However, Stewart has recently deepened his sincerity in adjustment to the times, making “The Problem with Jon Stewart” a much-needed series.