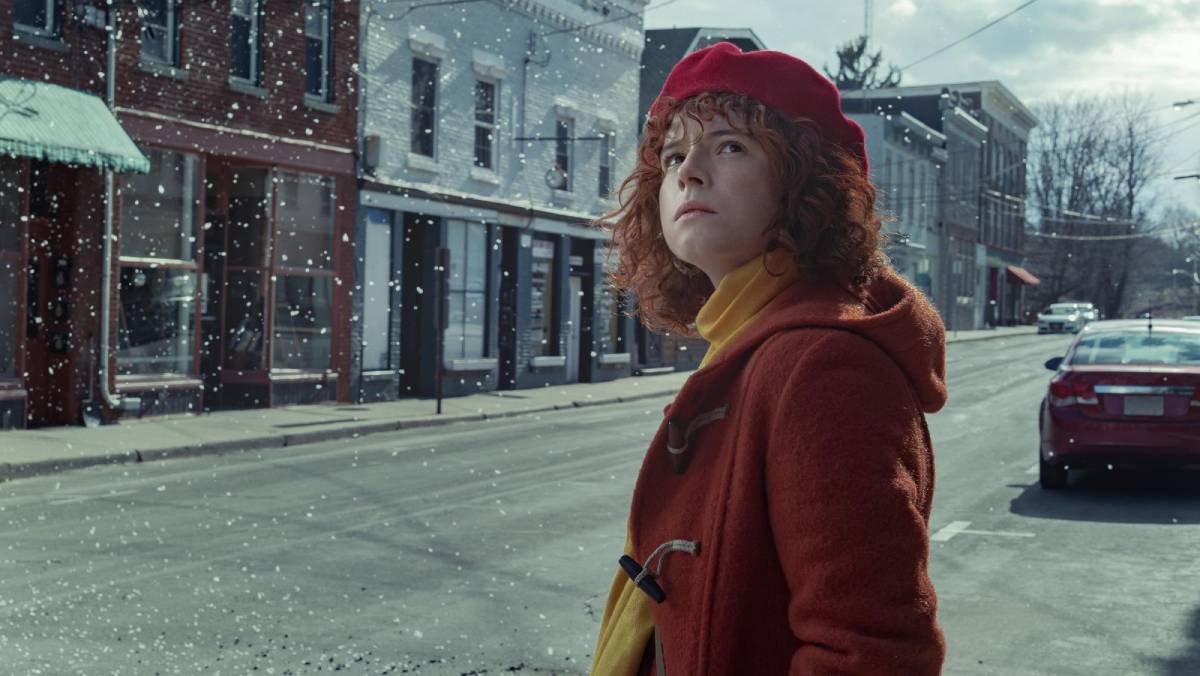 Courtesy of Netflix
Charlie Kaufman's films do not offer any answers. In the case of "I'm Thinking of Ending Things," a rich addition to his catalog, these questions are complex and existential.
By Elijah de Castro — Staff Writer
Published: September 15, 2020

Writing a review for a Charlie Kaufman film is like climbing Penrose steps. Kaufman doesn’t have any conclusions. He only offers questions — and questions about these questions.

Kaufman’s work as a screenwriter fostered the network of existential mania and metahumor present in “Being John Malkovich,” “Adaptation” and “Eternal Sunshine of the Spotless Mind.” In “I’m Thinking of Ending Things,” a psychological thriller adapted from the 2016 book of the same name, Kaufman continues his winning streak, telling the story of a young woman (Jessie Buckley), referred to by different names throughout the film, and her road trip with her boyfriend Jake (Jesse Plemons) to visit his parents (Toni Collette and David Thewlis) during a blizzard. At a dull point in her life as a student and painter, she is considering ending her relationship with Jake. It’s the extreme simplicity of this story that allows Kaufman to work on the nuances of the characters and the world that they share.

Despite appearing hollow and on the nose at first glance, the disorienting, uncomfortable tone that Kaufman experiments with is just the dress-up for what Kaufman communicates about humans’ points of view of the world. Jake’s parents age decades between scenes. The young woman and Jake stop at a 1950s-style ice cream store in the middle of nowhere during a snowstorm. Jake’s dog shakes itself dry in front of the young woman for an uncharacteristically long amount of time.

It’s certainly not subtle, but these moments are Kaufman’s way of analyzing how we organize the world and the people that populate our lives. Is the dog shaking for 10 long seconds actually happening, or is it an outside perspective on those strange moments in which we catch ourselves in an empty stare? These scenes are unsettling and confusing, but ultimately they make the film exceptionally human. As a result, the film must be viewed multiple times to be fully grasped.

Once again, the best aspect of Kaufman’s film is the actors. Buckley gives the standout performance of the film, playing a character that, despite being genuine and earnest, is vague and distant. However, Buckley clearly understands her character thoroughly, bringing patience and detail to a performance that allows us to question who she is and where she is going.

“I’m Thinking of Ending Things,” like in many Kaufman films, is narrated sporadically scene to scene, keying viewers into what Buckley’s character is thinking. She is depressed, or at least unfulfilled in her life, most obviously in her relationship with Jake. Anyone who has issues with finding their identity will appreciate how convincingly Buckley and Kaufman portray this feeling.

Kaufman also explores age and ageism, using prosthetics to age Collette and Thewlis up and down in experimental scenes at the family’s farm. In one of the most memorable scenes of the film, Buckley’s character wanders into Jake’s childhood bedroom, only to turn around and be confronted by a much older version of Jake’s father. With intense memory loss controlling his life, Jake’s father takes to taping words on certain objects around his house so he remembers what to call them. The sharp contrast between the different stages of life demonstrates Collette and Thewlis’ incredible talents as actors as well as devises an empathetic analysis of the way society treats the elderly — putting them in living facilities that Buckley’s character describes as “warehouses.”

It’s hard to compare “I’m Thinking of Ending Things” to Kaufman’s other work, but the links are easy to trace. It shares similar feelings of anxiety with “Anomalisa,” the exploration of romantic relationships from “Eternal Sunshine of the Spotless Mind” and the surrealism of “Being John Malkovich.” But “I’m Thinking of Ending Things” has elaborate ideas of its own, leaving viewers with another great addition to Charlie Kaufman’s film catalog.