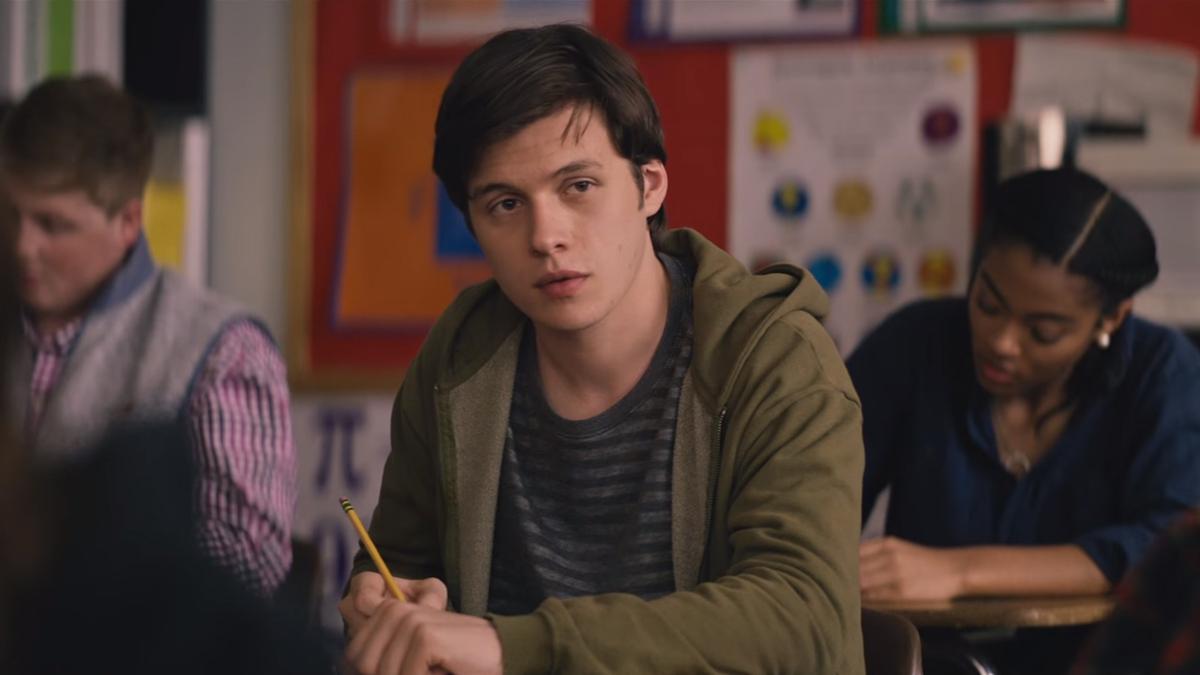 20th Century Fox
“Love, Simon” is based on the young adult novel “Simon vs. the Homo Sapien Agenda.” It follows teenager Simon Spears (Nick Robinson) as he comes out as gay, and is the first major studio rom-com to feature a gay protagonist.
By Arleigh Rodgers — Contributing Writer
Published: March 21, 2018

In “Love, Simon,” a teen romance film directed by Greg Berlanti, Simon Spier’s (Nick Robinson) characteristically awkward demeanor is present in varying degrees. He’s self-conscious and self-aware, tripping over his own feet and fumbling with things that should be simple. As he navigates his senior year of high school, counting down the days until graduation on a blackboard wall in his bedroom, the audience learns that Simon has a defining, concealed identity. Simon is gay. But more importantly, no one knows.

That is, until a student at Simon’s high school — under the pseudonym “Blue” — posts an anonymous confession of his own homosexuality on a social media website. Simon creates a fake email address and contacts Blue. “I’m just like you,” he tells him. “Except I have one huge-ass secret.”

The audience is given subtle hints of Simon’s homosexuality. Early in the film, Simon tries to compliment the boots of an attractive male landscaper guiding a leaf blower over the neighbor’s lawn. When Simon realizes the landscaper can’t hear him, he gives up and gets into his car. His horn chirps twice as he, defeated, rests his head on the steering wheel. It’s Simon’s frazzled charm that makes this scene conspicuously cute, and the use of awkward dialogue adds sweetness and — in the best way — secondhand embarrassment for the audience.

However, when he talks to Blue under his own pseudonym, Jacques, Simon blossoms. Their conversations are flirty and witty. As their emails become increasingly personal, Blue isn’t left completely faceless; at different points in the film, Simon imagines Blue to be three different boys at his school. This develops an unexpected yet delightful mystery. It’s an enchanting representation of Simon’s growing love and his intense desire to know the boy behind these emails.

Yet this tender connection is perhaps the only engaging seam that runs through “Love, Simon.” The film’s shine is shrouded by layers of tawdry cliches and contrived relationships that lack interest and appeal. Based on the novel “Simon vs. the Homo Sapiens Agenda” by Becky Albertalli, the film’s screenplay is littered with unrealistic, falsely teenage dialect written by adults whose idea of the modern-day teenager consists of people who “drink way too much iced coffee while gorging on carbs.” All the characters except Simon are shallow, isolated from the way real teens — ones who are more than plot lines and background noise — act and feel.

The secondary element of “Love, Simon” is a vexing blackmail storyline mockingly similar to many other teen dramas. To Simon’s chagrin, a boy named Martin (Logan Miller) sees Simon’s emails with Blue on a computer in the school’s library after Simon forgets to log out of his account. The galling request Martin makes of Simon — to set him up with Simon’s friend Abby or have the emails posted for the school to see — is a stereotypical and predictable storyline. The audience knows the plan won’t work out and that Simon will lose his friends in the process, but it also knows not to fret. The story wraps up too predictably and cleanly, leaving that part of the film feeling incongruous and out of touch with how things normally transpire.

The way the film portrays Simon’s family is similarly discordant. The Spiers are little more than a perfect family. They are a picture of upper–middle–class opulence, complete with the typical high school sweetheart parents — the father with the bad jokes, the mother who assuages him — and the ingenious daughter who spends her free time cooking food inspired by “Top Chef.” They care about each other, but their love is never presented in a tangible way. When Simon comes out as gay to his parents, they are shocked — but despite the seeming connection the audience is supposed to believe, his parents don’t comfort him, assure him that they still love him or do anything to indicate their support for him. It’s Simon who has to do the explaining, the comforting and the assurance. The parental love that should be there is seemingly gone. This noticeable absence of intimacy contradicts the feigned importance of love between family members presented earlier in the film.

“Love, Simon,” however, does fulfill its romantic promise. The film’s conclusion is cliched, but justifiably so. When Blue is revealed, it gets “romantic as F,” a wholesome and satisfying showcase of magnetic glee. It’s a heartfelt, picturesque ending — one uncommon to many LGBTQ films in Hollywood, which often end in tragic, forsaken or complicated love.

Though a banal, passing teen drama, “Love, Simon” is revolutionary. It’s for the world of Simons, of high school seniors and closeted kids. It’s for the boy who isn’t Simon but knows his experiences. For those awkward moments around your crush when you can’t rely on how you truly feel. Like Simon, the film often slips on its own mistakes, but its effect runs clean and burns with an ebullient spirit.