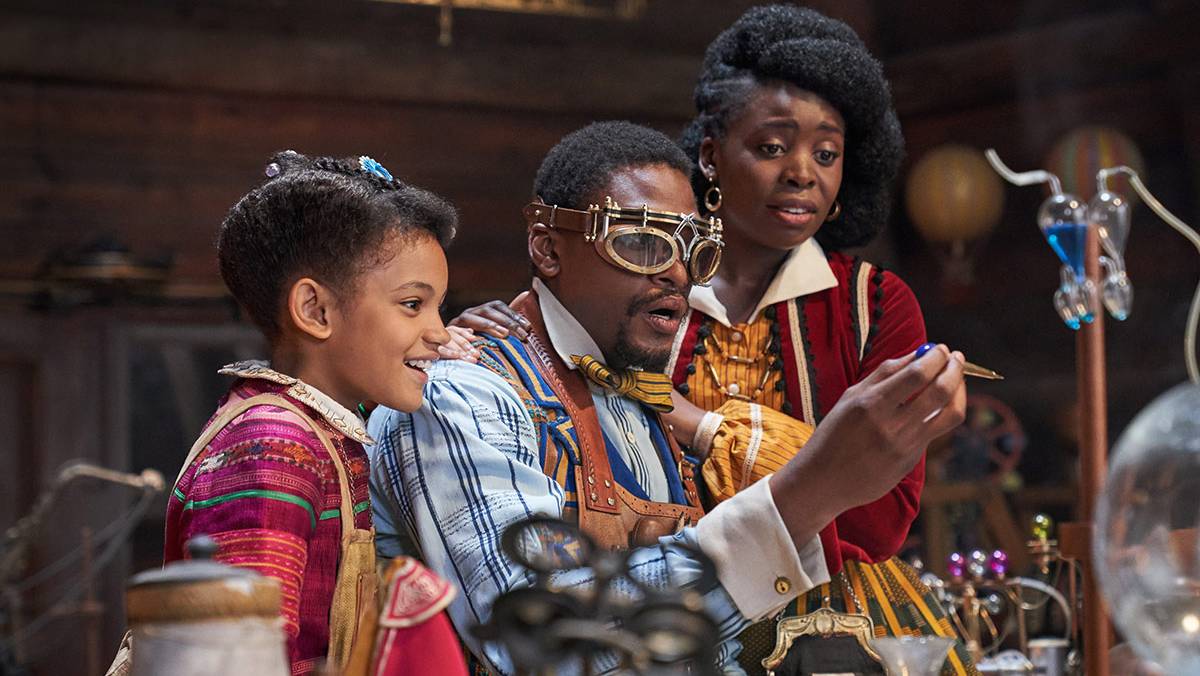 Courtesy of Netflix
“Jingle Jangle: A Christmas Journey” is a vibrant holiday story with a cast composed almost entirely of actors of color. The visuals are enchanting, and the story is heartwarming.
By Sydney Brumfield — Staff Writer
Published: November 23, 2020

With the hectic 2020 coming to a close, Netflix’s recent holiday musical, “Jingle Jangle: A Christmas Journey,” makes it easy to get into the Christmas spirit.

The film is written, directed and produced by filmmaker David E. Talbert. Talbert is no stranger to Christmas movies, having crafted the films “El Camino Christmas” and “Almost Christmas.” “Jingle Jangle: A Christmas Journey” tells the story of Jeronicus Jangle (Forest Whitaker), a famous toy inventor. When Jangle’s apprentice Gustafson (Keegan-Michael Key) steals Jangle’s book of inventions right before Christmas, Jangle falls into debt and loses everything. The Jangle family falls down on its luck until Journey Jangle (Madelen Mills), Jeronicus’ granddaughter, makes it her mission to save her grandfather’s legacy and bring the magic back to her family.

“Jingle Jangle: A Christmas Journey” stars an incredibly talented cast composed almost entirely of people of color. In addition to Whitaker and Key, this includes Phylicia Rashad, Ricky Martin and Anika Noni Rose. According to the University of California, Los Angeles Hollywood Diversity Report 2020, three out of 10 lead actors in a film are people of color, and, behind the camera, it is not much better. The report states that 1.4 out of 10 film writers are people of color, and, similarly, 1.4 out of 10 directors are people of color. It is not new information that the film industry has a glaring issue of whitewashing and underrepresenting diverse cultures. That is why seeing films starring a diverse cast with a Black writer and director offers hope that the industry is progressing.

Among this star-studded cast is newcomer Mills, who is only 11 years old. Mills gives an excellent performance depicting Journey as an independent and intelligent protagonist who awes the audience with her maturity and then makes them laugh at her wit. There are not enough strong women role models for young girls, let alone strong women of color role models. Mills’ home run performance makes Journey a compelling character for viewers young and old.

The visual components of this film are electrifying. The set design and costumes combine the technical elements of early 1800s attire with flashy, bright fabrics subtly influenced by African tribal patterns. Additionally, the entire ambiance of the film is riddled with heavy elements of steampunk. Copper cogs, gears and operating machinery appear on characters’ costumes and backdrops, as well as in the toys created through the film.

The soundtrack features upbeat, whimsical hip-hop songs by Philip Lawrence, Davy Nathan, Michael Diskint and John Legend. The first musical number in the film, “This Day,” embraces the viewer in an R&B song that is carried by a beautiful vocal performance from Justin Cornwell and Sharon Rose, who play young Jeronicus and his wife Joanne Jangle. This is Cornwell and Rose’s first feature performance. Even the more classically composed song, “Square Root of Possible,” which has more of a show tune power ballad feel to it, encapsulates the audience in a magical moment of self-assurance from Journey.

What makes the musical numbers in this piece go above and beyond all expectations is the choreography. Ashley Wallen, most known for the brilliant choreography in “The Greatest Showman,” has crafted beautiful routines that complement the soundtrack rather than distract.

“Jingle Jangle: A Christmas Journey” leaves viewers feeling warm and happy, feelings that are truly what the holiday season is about. Though there is no mention of Santa Claus or the North Pole in this movie, that does not prevent it from driving home the themes of love, forgiveness, joy and redemption this Christmas season. This film is delightful for audiences of any age and is a wonderful accomplishment on the part of Talbert.