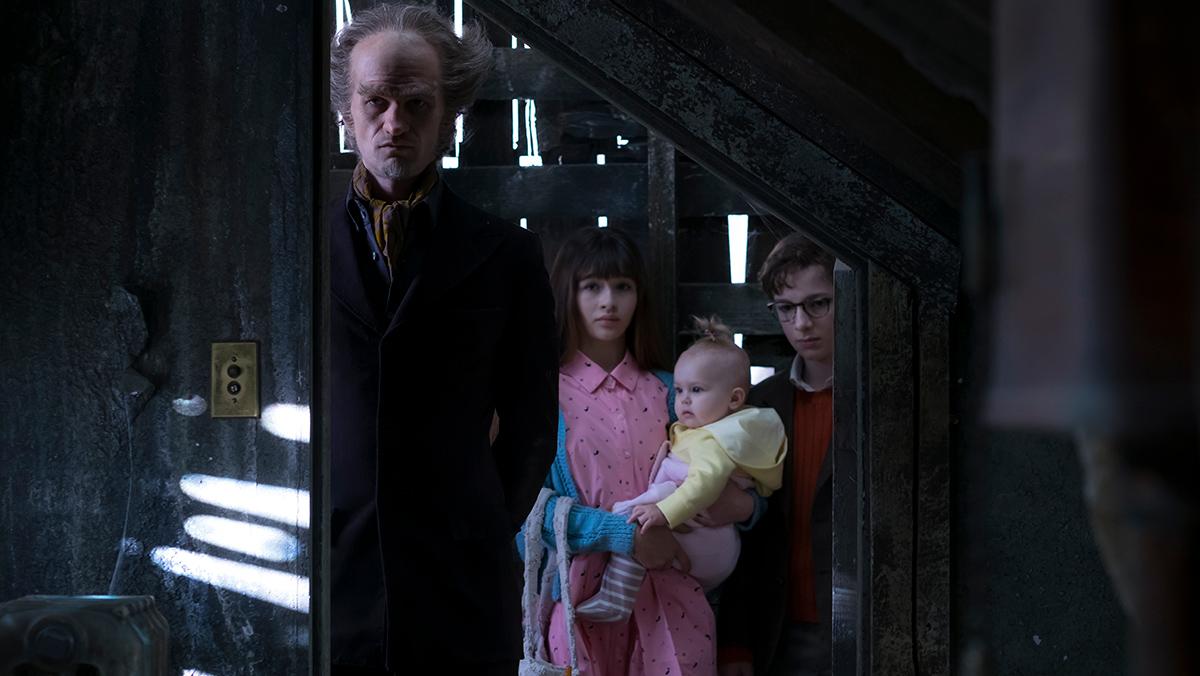 Netflix
Season one of "A Series of Unfortunate Events" covers the first four books: “The Bad Beginning,” “The Reptile Room,” “The Wide Window” and “The Miserable Mill.”
By Ashley Wolf — Staff Writer
Published: February 10, 2017

A Series of Unfortunate Events

The dark and twisted story of the Baudelaire children is no walk in the park, but it does make for a fantastic, binge-worthy Netflix series. “A Series of Unfortunate Events,” released Jan. 13, tells the tale of three orphaned siblings trying to escape a madman who wants to get his grimy hands on the Baudelaire’s family fortune.

Daniel Handler, under the pen name Lemony Snicket, wrote 13 books in the “A Series of Unfortunate Events” series from 1999 to 2006. Season one of the Netflix show covers the first four books: “The Bad Beginning,” “The Reptile Room,” “The Wide Window” and “The Miserable Mill.” There are two episodes per book, which is the appropriate amount to capture each 200-page book. Netflix stays true to the storyline and brings the viewers into the world Handler created. Each book tells a tale about different guardians the Baudelaires stay with and the different schemes the evil Count Olaf (Neil Patrick Harris) conjures up.

Violet (Malina Weissman), Klaus (Louis Hynes) and Sunny (Presley Smith) Baudelaire charm the audience with their extraordinary brilliance, strength and compassion. The siblings’ support for one another during this terrible time makes the characters even more endearing. The Baudelaire children use their individual special talents to work together to figure out solutions to troublesome situations created by Count Olaf.

The show does a great job at taking what made the books frustrating and bringing it to life on the screen: the severe lack of common sense from the adults and their obliviousness to Count Olaf’s schemes. The best example of this comes from Arthur Poe (K. Todd Freeman), the banker who has the power to grant guardianship to those who care for the children. He is the most oblivious and infuriating adult of them all because he never suspects a thing. The frustration is palpable as he unknowingly hands the children over to Count Olaf.

Lemony Snicket appears as a character in the show. Snicket (Patrick Warburton) intrigues the audience with his narration of the Baudelaire’s plight, adding some comic relief during some scenes. The audience finds Snicket in the strangest of circumstances, which becomes part of a mystery in the storyline. Snicket apologizes for the “misery, tribulation and dire inconvenience” that the show will display and urges the viewers to watch something much less melancholy.

The unique and playful artistic direction throughout the series is highly impressive and leaves the audience wanting to explore more of the world of the Baudelaire children. The sets offer a vast array of landscapes — while some of the sets are completely dreary, others are beautiful and vibrant. For example, Doctor Montgomery Montgomery’s (Aasif Mandvi) snake-themed mansion is a fantastical wonderland whereas Lake Lachrymose is so cold and dreadful that it seems like the perfect location for a horror movie. The whimsical sets resemble those of Tim Burton and Dr. Seuss fantasy lands — a delightful and sometimes macabre diorama effect. The sets add to the storyline, allowing the audience to more clearly understand the Baudelaires’ terrible and tragic circumstances and heighten the exaggerated despair that makes “A Series of Unfortunate Events” so compelling. The aesthetic exudes such a distinct personality that it becomes another character: Full of charm and mystery, the design is one of the show’s greatest accomplishments.

Harris not only captivates the audience through his portrayal of the glowering and repulsive Olaf, but also lends his Broadway-quality vocals to the theme song of the show — a theme song that delightfully changes every two episodes. The chorus remains largely the same: “Look away, look away/ This show will wreck your evening/ Your whole life and your day/ Every single episode is nothing but dismay.” The song is right. Although the lyrics exaggerate the way the audience will feel about the show, remorse for the Baudelaires is inescapable.

The characters in the new Netflix show “A Series of Unfortunate Events” tell the audience several times to “look away,” but the excellent production of the show makes it worth watching. This show displays some of Harris’ best work, and the charm of the three actors who play the Baudelaire children will leave the audience hooked and wanting more.