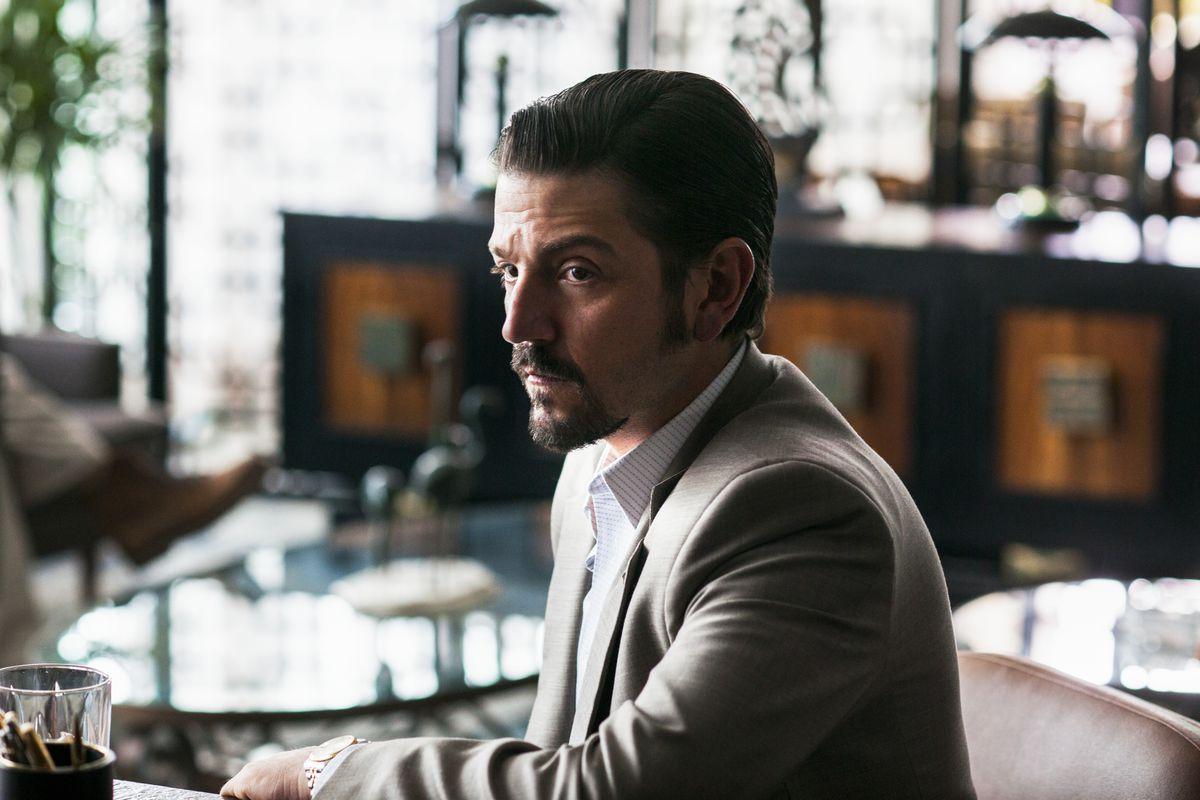 Netflix exceeds expectations once again with “Narcos: Mexico,” a grittier version of its predecessor “Narcos,” (2015). The spinoff features Wild West-like lawlessness and showcases the conflict between the American government and an unstable, cartel-rampant 1980s-era Mexico.

Performances from both Michael Peña and Diego Luna are fruitful in representing the emerging struggles of the war on drugs. Luna plays the ruthless but composed Mexican drug lord Miguel Ángel Félix Gallardo while Peña plays the dedicated Drug Enforcement Administration (DEA) agent Enrique “Kiki” Camarena. This historical drama tells the story of Gallardo, also called El Padrino, and his journey in creating a network of drug traffickers operating from Guadalajara, Mexico. The drug lord builds his empire on marijuana and eventually becomes involved with cocaine — making billions of dollars until getting arrested in April 1989.

Cinematographers depict a sepia-colored Mexico full of well-armed commandos and snow-white cocaine. The visuals are executed to the same degree of excellence as the previous series, which features the suffocating greenery of Colombia’s forests and the dense urbanity of its slums. Mexico’s 1980s high life seems to mimic that of America’s around the same time — cocaine, topless women and thick-rimmed sunglasses worn past midnight.

The corruption of groups within the Mexican government, such as the Federal Security Directorate (DFS), heightens the conflict between the DEA and the Guadalajara Cartel. The script is successful in accurately recreating the hostile atmosphere Kiki and his fellow agents faced while working both for and alongside governments that wouldn’t properly assist them.

Throughout “Narcos: Mexico,” we see a persistent struggle between the DEA and outside agencies. After a raid ends in failure, Kiki expresses how the Mexican government can get anything done when it wants to and how the people in charge fail to act on solid leads. Peña is stellar in his expression. Everything that makes up his character’s instincts as a DEA agent is compromised. He is infuriated at his mistake and traps this frustration inside. Peña’s ability to emphasize the energy of this and even have it rub off on his family is remarkable. It truly captures the hardships faced in working as an agent of the American government.

“Narcos: Mexico” combines the performances of its talented cast with action-packed scenes that progress the story in an effective manner. This is seen when Cuban cocaine trafficker Alberto Sicilia Falcón (Luiz Roberto Guzmán) raids a Guadalajara associate’s weed packaging warehouse with nothing short of a small army. The scene is nothing short of intimidating cinematics, explosions and the passionate implementation of a highly complex script.

We also get a glimpse of what low-rung Mexican gangsters do when they start making cartel money. The Cowboys of Sinaloa, led by Rafael Caro Quintero (Tenoch Huerta), are an example of this lifestyle after they encounter a new sum of wealth to do with what they please. In the third episode, “El Padrino,” Rafa shares his plan to build a ramp to launch a motorbike into his mansion’s pool. This is just one example of the reckless behavior that characters like Rafa partake in throughout the story. Instances like these are captured by an array of shots that paint the living, breathing world of a historical, cartel-run Guadalajara, Mexico.

In the fifth episode, Gallardo is abducted by the Medellín Cartel after agreeing to transport cocaine for the Gentlemen of Cali, or the Cali Cartel. He is trapped and left to gaze out into the night at a swamp full of ravenous hippos, and before he can get his bearings, the real beast emerges from the darkness. Pablo Emilio Escobar Gaviria, the main antagonist of the previous series, approaches the patio and debilitates an already uneasy Gallardo with nothing more than his presence. Moura aces this scene: His walk is calculated and careful, his expression is stoic and soulless.

Even in “Narcos,” Moura plays Escobar as a ruthless drug lord in a constant pursuit of power. In both “Narcos” and “Narcos: Mexico”, Escobar may snap at any moment any time he’s onscreen. There is always a suspense to his presence that leaves viewers questioning what he’ll do next. Moura’s iconic approach is reminiscent of the Escobar that most viewers know from the previous series.

Escobar interrogates Gallardo without even having to lay a hand on him because of the legendary but developing reputation of the King of Medellín and his army of ruthless traffickers. Escobar is nothing short of a force to be reckoned with. He compares himself to the hippos that also block Gallardo’s exit, forewarning his dangerous and volatile nature.

“Narcos: Mexico” is a coked-up rollercoaster ride with solid acting, nuanced writing and eye-catching cinematics that are executed in complete unison — this 10-episode masterpiece is definitely worth the watch.