Review: “NBA 2k22” game adds nothing to the series 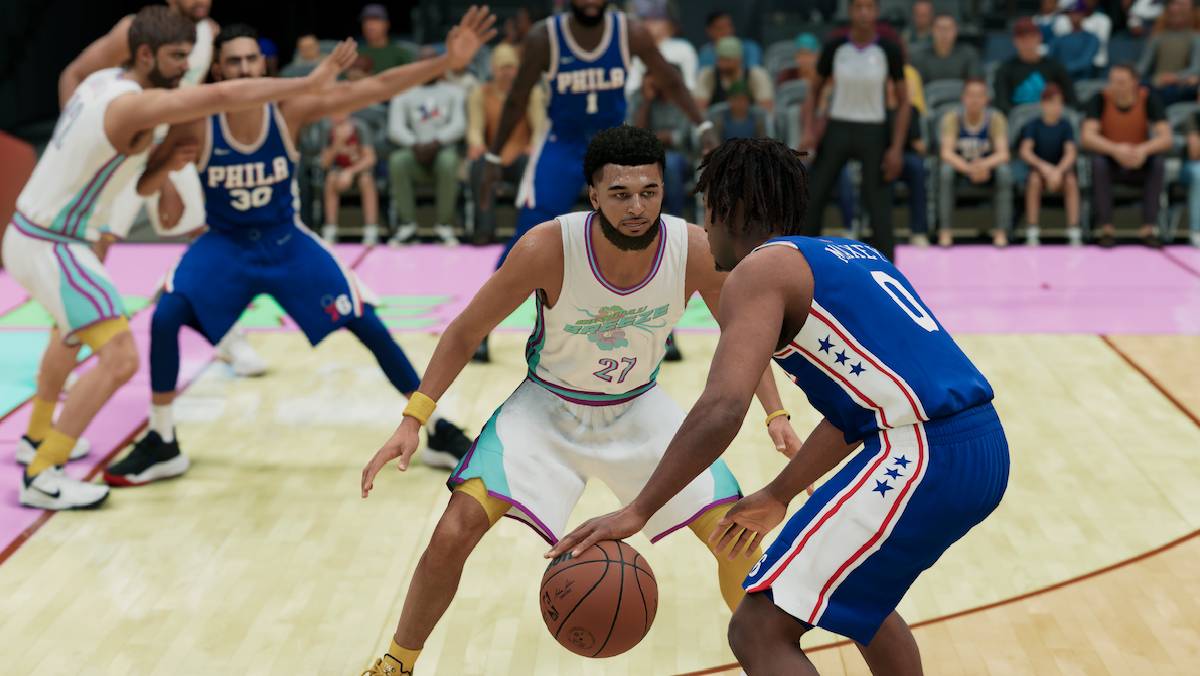 Courtesy of 2k Sports
“NBA 2K22” is the perfect representation of how stale and brain-numbing the NBA 2K series has become.
By Andres Hernandez — Contributing Writer
Published: October 17, 2021

“NBA 2K22” is the perfect representation of how stale and brain-numbing the NBA 2K series has become. As per usual, the latest installment in the two-decade-old series is almost identical to the previous year’s “NBA 2K21.” As time goes on, the series has become less about replicating realistic basketball and more about finding ways to further drain the bank accounts of its player base. Despite the sustained popularity of the series, the lack of care to improve the annual installment affected sales of “NBA 2K21.” This negative impact of sales may grow with “NBA 2K22” as it has failed to raise the quality of the series. The game has been able to steadily improve graphics, but this isn’t enough when there is a lack of substance everywhere else.

The greatest flaw of “NBA 2K22” is how unrealistic and boring its gameplay is. Loading into an offline game shows the flaws of the non-player-controlled (NPC) teammates and rivals. Over the course of the exhibition, a gamer can see these NPCs run out of bounds for no reason, decide to shoot unrealistic shots and make extremely poor basketball decisions. The intelligence of the computer-controlled players was once a strength of the series, but there hasn’t been any improvement in this category since the early 2010s.

The lack of focus on this core feature has come alongside the rise of “MyTeam” and “MyCareer,” two game modes of “NBA 2K22” that give the player an extreme advantage that are only attainable if they use more real money to make their team or player better. These two game modes are by far the most played, and it is hard to be competitive without spending more money. The game’s biggest moneymaker, “MyTeam,” is virtually identical to the previous two installments. This game mode revolves around buying a “card pack” of concealed basketball players — players buy a “card pack” in hopes of finding a great player, like Michael Jordan or Lebron James. This is essentially gambling and is an insult to the people who have already paid $70 for the initial price of the game.

The “MyCareer” mode allows the players to make their own custom basketball player who goes through a journey to become an NBA star. This year, there was no effort to make an original or interesting story. It is a story that centers around a social media star having three options for his basketball career. All three options have equally dull and predictable stories. The lack of quality will lead a majority of players to skip past monotonous cutscenes so they can simply play basketball. Whatever path the player chooses ultimately does not matter as they all end at the same final destination, rendering most of it pointless.

NBA 2K22’s “MyCareer” story serves as a metaphor for the game. Just like how the choices one makes during the game mode don’t affect the ultimate outcome, neither do any of the promises made by 2K developers ever change the quality of the game. Every 2K rendition puts out the same lack-luster quality, and every year they make outrageous amounts of money. With no competition in the highly lucrative “basketball simulation” genre, it seems like next year’s review of this game is going to be just as repetitive as the series has become.