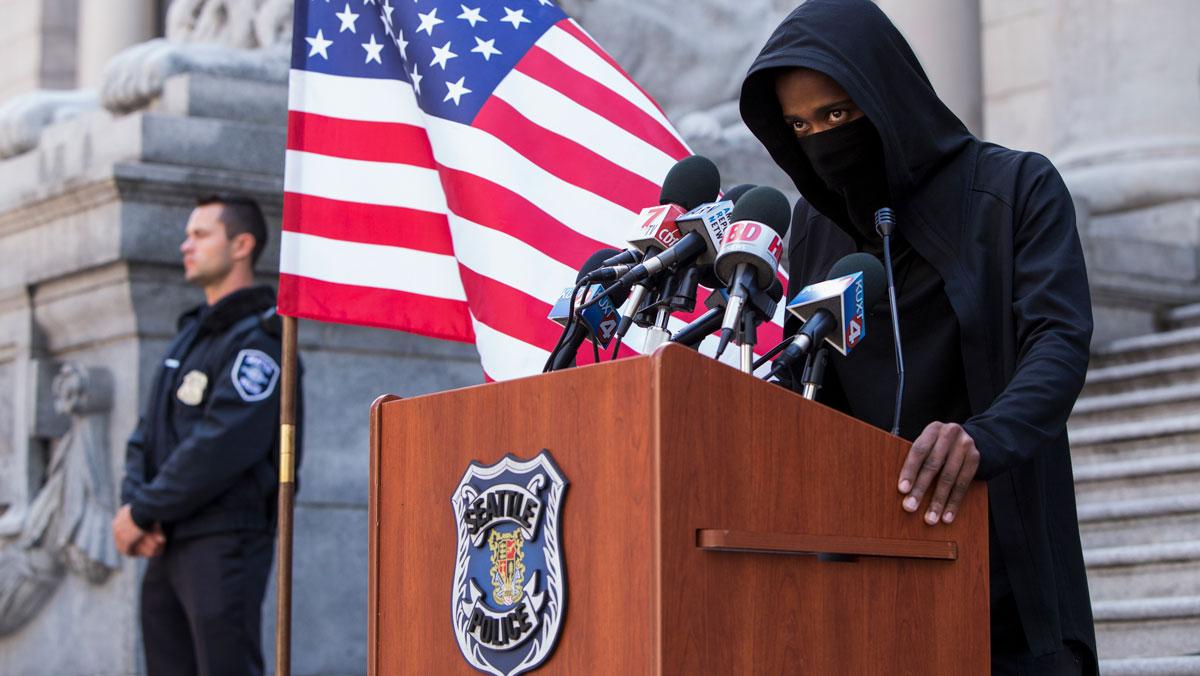 Netflix
"Death Note" is the westernized version of the Japanese anime classic. The Netflix remake is less a high stakes detective drama and more a high school drama with a sinister supernatural twist.
By Jake Leary — Life and Culture Editor
Published: September 5, 2017

Light Turner (Nat Wolff) possesses an incredible power — he can dispense death with the flourish of a pen. With this gift, Light vows to rid the world of evil, to end crime once and for all. But as his plan progresses, Light becomes worse than those he tries to stop.

Based on the beloved manga by Tsugumi Ohba, “Death Note” continues Hollywood’s bad habit of westernizing Japanese stories. From “Godzilla” in 2014 — and in 1998 — to the soulless “Ghost in the Shell” released earlier this year, the film industry seems determined to soil Eastern classics. Adam Wingard’s “Death Note,” distributed by Netflix, is illogical, boring and infuriating. At some points, the film feels like a bad horror movie, at others like a bad teen drama, but never like the thrilling detective drama it’s adapted from.

One day, a notebook falls from the sky. Whoever picks up the notebook is given the power of a death god — a Shinigami. Light finds the book, meets Ryuk (Willem Dafoe) the god responsible for the Death Note’s care, and murders criminals in the name of vigilante justice. To protect his identity, Light adopts the moniker Kira. Along the way, he attracts the attention of fellow high schooler Mia Sutton (Margaret Qualley), who enjoys casual killing, and L (Lakeith Stanfield), a mysterious detective determined to stop Kira’s reign of terror.

Any adaptation, particularly one with as much baggage as “Death Note,” will be hampered by comparisons to the source material. The Netflix update is also faced with controversy surrounding the white–washed nature of the film. There is simply no reason to change the ethnicity of the lead characters, nor is there a reason to transplant the story to America. The film could be forgiven if it had a new take on the original idea. Unfortunately, “Death Note” is neither a strong stand-alone story nor is it a compelling retelling of the manga. In Americanizing “Death Note,” Wingard removed any of the intellectual threat that defined the source material. The original story — at least, the first half — focused on the intellectual battle between L and Light. It was a battle of wits, like watching Batman challenge Sherlock Holmes. It was a cat–and–mouse game in which both sides were evenly matched and equally dangerous. The film dispenses with this and opts instead for action and gore. The climactic scene is a chase between Light and L that culminates with a large–scale, bombastic set piece which would fit more cozily in “Transformers” than “Death Note.”

The other major crisis is one of character. None of them are likable. Or compelling. Light is a whiny teen, desperate for Mia to like him. He uses the Death Note as a tool to win her affection and demonstrate his power. At one point, Light suggests he and Mia sit down over a bowl of popcorn and kill a criminal. Mia plays into Light’s games and encourages him to take increasingly violent risks. It’s like being expected to root for a school shooter. There’s no reason to root for either of them, and there’s no room for moral debate. Light and Mia are monsters without compelling motives.

L also suffers from poor characterization. He is manic and never seems capable of the genius for which he’s known. His breakdowns seem to take up more screen time than his calculating moments, and by the end of the film, there’s nothing left of the super intellect the audience met initially. L isn’t treated seriously, rather as a bland bundle of eccentricities and quirks. There is a moment late in the film when Light, Mia and Light’s father are eating dinner; from nowhere, L jumps from the shadows and takes a seat at the table. This moment is meant to establish L as an ever–present threat, but it is so random and nonsensical that it’s laughable.

Everything about “Death Note” feels wrong. The characters are either unfathomably dumb, irredeemably evil or frustratingly shallow. There are no profound insights into L’s motivations and no moral arguments in favor of Light’s actions. Mia is worst of all — she’s cruel for no other reason than because she can be. “Death Note” isn’t a missed opportunity. The truth was in the cards all along. One only had to look at the dozens of other disgraceful anime adaptations to realize “Death Note” was better off dead.