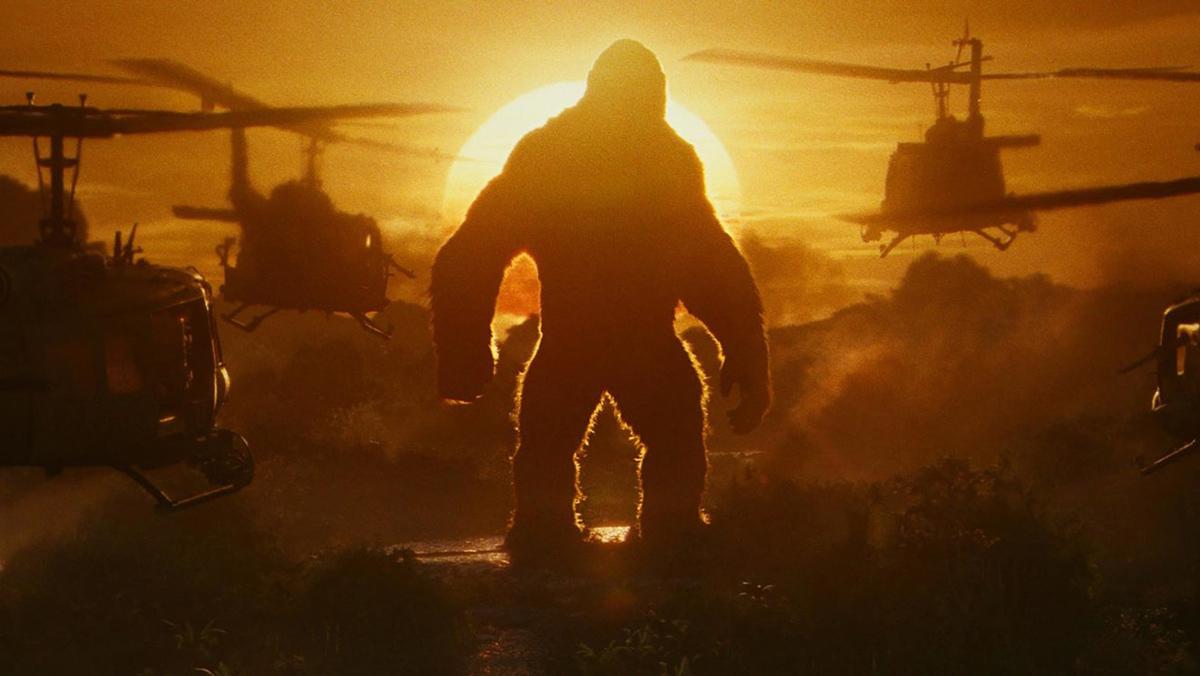 Legendary Pictures
"Kong: Skull Island" is the followup to 2014's Godzilla. The film establishes a kaiju cinematic universe which will culminate with the release of a King Kong versus Godzilla movie in 2020.
By Aidan Lentz — Staff Writer
Published: March 21, 2017

Helicopters fly over a luscious green island. The red–hot sun beats down on the explorers as they start to drop bombs from a line of helicopters. Explosions pepper the island. Just then, a few soldiers start to notice something a little bit odd. There’s a 100-foot ape staring right at them, and he doesn’t look happy.

Following the lengthy “King Kong” in 2005, Legendary Pictures saw fit to attempt a far different approach to King Kong in this year’s “Kong: Skull Island.” Gone are the long runtime and slow–paced introspection of the previous movies, and in their place are bombastic, cataclysmic action and bold visual spectacle. But does this daring new direction for the franchise work? Not entirely.

“Kong: Skull Island,” directed by Jordan Vogt-Roberts, follows a group of soldiers, scientists and a war photographer embarking on the first full expedition of Skull Island in the Pacific Ocean in human history. Things turn awry as the crew finds itself trapped in a deadly, monster-infested environment.

The visuals are the clear standouts. Taking heavy inspiration from Vittorio Storaro’s iconic work as director of photography on “Apocalypse Now,” “Kong: Skull Island” is the most visually distinctive action movie of the last few years. The color palette is filled with fiery reds, noxious yellows and lively greens. The camera is constantly finding inventive angles and shots, keeping the audience on their toes. One distinctly memorable shot is a long take from the door of a helicopter looking into the interior as Kong flings the chopper off into the distance. The film has a fantastic sense of scale. Every animal and monster feels gigantic and unstoppable in the best possible way.

The action is also top–notch. The film jumps from one pulse–pounding fight to the next, using its giant animal premise in fun and inventive ways. One standout sequence features a troop of soldiers locked in a battle with a giant spider in a bamboo forest. These action scenes are all complemented wonderfully by an energetic rock soundtrack with classic songs from Black Sabbath, Creedence Clearwater Revival and David Bowie, among others.

The only problem with this movie is everything else.

The characters in the movie all feel like cardboard cutouts despite the talented actors who portray them. Tom Hiddleston, Brie Larson, Samuel L. Jackson, John Goodman and John C. Reilly are all great actors and do a good job of injecting as much charisma as they possibly can — it’s just not enough. There’s no clear human lead in the story, and none of the characters goes through a satisfying and dynamic arc. Hiddleston’s character starts out as a jaded rebel, and by the end of the movie, he’s a jaded rebel who’s sort of willing to play by the rules. Larson plays a war photographer, and Reilly plays a man who’s been trapped on the island for 20 years. They’re all great actors, but they’re given absolutely nothing to do.

Larson’s character is the most frustrating of all. It’s as though her relationship with Kong was supposed to be the emotional center of the film, but they’re only given one short scene together before the final battle. This is a huge problem because without this connection feeling earned, the audience doesn’t care about Kong — the character that this movie is named after.

To the movie’s credit, the pacing never feels slow. The film moves from scene to scene quickly enough, integrating plenty of action throughout. This prevents the audience from being stuck with any one boring character for too long, making their blandness a little less noticeable. However, the faster pace often leads to awkward scene transitions and jarring time jumps.

The larger problem with this movie is that it doesn’t have a satisfying arc. All that happens in the movie is a group of humans enter Skull Island and cause a lot of trouble by dropping bombs. This means Kong has to go around and fix this by killing all the monsters that they accidentally unleashed. That’s really it. No one learns much of anything, and the movie itself fails to feel like it’s about anything. The total lack of human involvement or impact on the finale makes the whole affair just feel like pointless action instead of a gratifying story.

Ultimately “Kong: Skull Island” falls into the same trap that crippled “Batman v. Superman: Dawn of Justice” and “The Amazing Spider-Man 2.” Instead of feeling like a movie that was made because it’s a story that had to be told, the film feels like it only exists so that Kong can be established for 2020’s “Godzilla vs. Kong.” After the final battle, the movie telegraphs future movies in a painfully obvious way by playing the song “We’ll Meet Again” by Vera Lynn over a conversation among the survivors about the future problems that the discovery of Skull Island will inevitably cause.