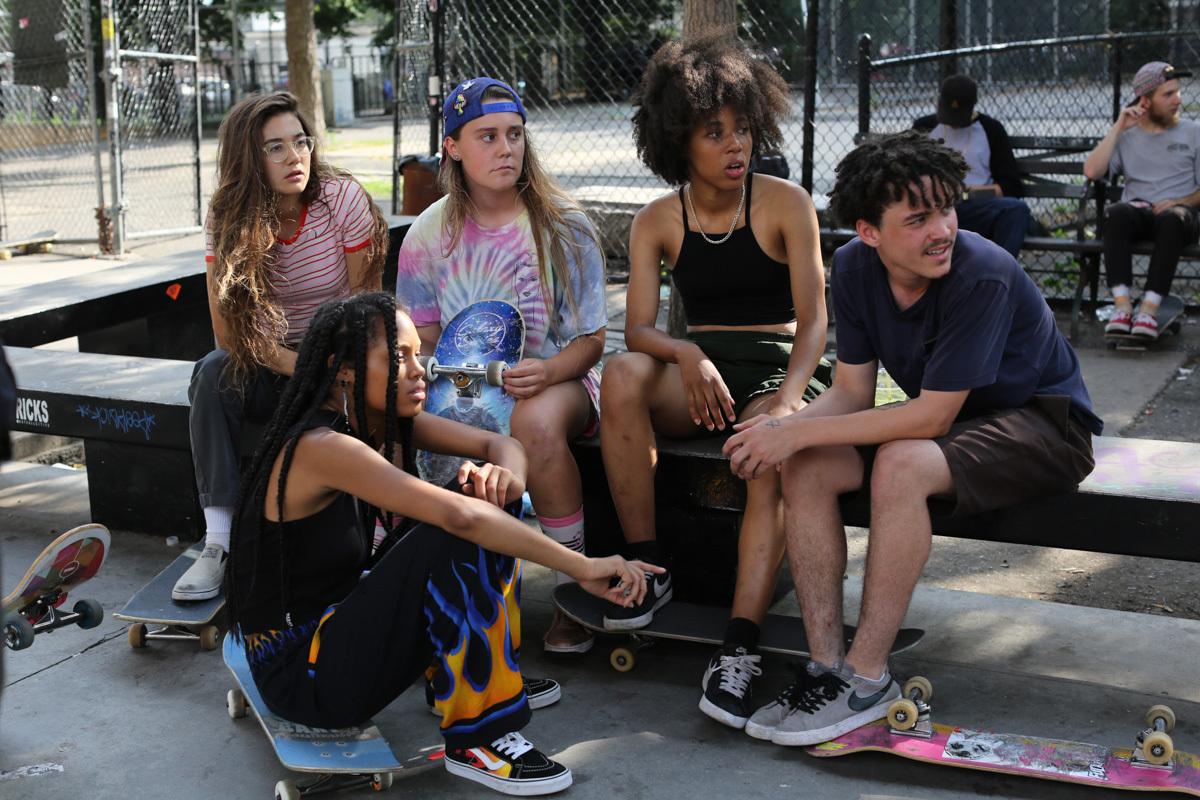 The audience is thrown into director Crystal Moselle’s “Skate Kitchen” with little introduction. Blood running down her thighs, silent curse words slipping out of her mouth, Camille (Rachelle Vinberg) has just been “credit carded” — her skateboard, instead of landing wheels down, has ended up between her legs.

This is one of the more intense moments of the film, which with breathtaking cinematography and understated performances, encapsulates the tranquility of Camille’s skateboarded adventures around New York City. She denies her mother’s very stern orders to never skate again and instead decides to travel from her home on Long Island while her mother is at work to meet up with a group of female skaters, the Skate Kitchen, in New York City.

Though Camille is an outsider at first, the Skate Kitchen takes her under its wing. She follows the girls to skate parks and tar-topped roofs around the city, each moment perfectly captured and savored by Moselle’s camera. The keen eye that examines their teenage world is passionately sincere and tender, highlighting the girls’ adventures as ones that fulfill their inexorable and teenage thirsts for freedom and self-expression.

The girls of Skate Kitchen, Camille included, are diverse, witty and most importantly, a natural and cohesive group that allows “Skate Kitchen” to run — or skate — beautifully through to the end. They can be riotous and cocky, like Kurt (Nina Moran), or they can be affectionate and warm, like Janay (Ardelia Lovelace), with whom Camille creates the closest relationship. Either way, there’s never a second of boredom. Though they’re each perfectly rendered stereotypes of “skater girls,” — the recognizable drawl, the skater vernacular, the Thrasher t-shirts — they are refreshingly wholesome and individualistic. Their personalities clash and blend, melt together and assemble a portrait of nearly unbreakable affinity. Nearly.

Then Camille starts hanging out with Devon (Jaden Smith) around the middle of the film. Despite knowing about Janay’s uneasy, past relationship with Devon, Camille develops a hidden desire for him. Their chemistry is accentuated by the film’s soundtrack, which cascades through the background of their moments alone together. In one scene, atop another tar roof, he tells her she’s the only girl he’s ever brought up here. “Really?” she asks, unsuccessfully hiding a rouged face and dumbstruck smile. Vinberg’s subtly nuanced performance in these scenes reveals just how innocent Camille actually is. She’s quick to fall for a boy she knows she cannot have, almost as if she thinks she won’t get another chance with someone else. Her deep-rooted introversion and unsteady confidence seemingly beg her to think so. Smith exudes charm as equally subtle as Vinberg. Camille is enamored with him, and so is the viewer.

Before the film begins focusing on Camille and Devon’s relationship, “Skate Kitchen” is a soaring success, floating through the skateparks and the city traffic with ease. It’s frustrating, then, to be suddenly catapulted into subject matter so tremendously familiar. Girl meets boy, girl likes boy she can’t have. It’s even more excruciating to see Janay’s reaction when she discovers Camille’s crush. It’s clear to the audience just how easily this situation could have been avoided had Camille displayed more candor with Janay and the other members of the Skate Kitchen. The drama that follows doesn’t feel authentic, and coming from a movie that relishes its authenticity and genuineness, it’s difficult to watch the characters thrown into such generic circumstances.

Though slightly bogged down by this irksome ending, it’s the somehow endless beauty caught in each scene and the effortless kinship between the girls that carry “Skate Kitchen.” Each scene with the Skate Kitchen is as consequential as the next. For though the film has its tedious moments, to the Skate Kitchen — and to the audience — they aren’t that mundane after all.