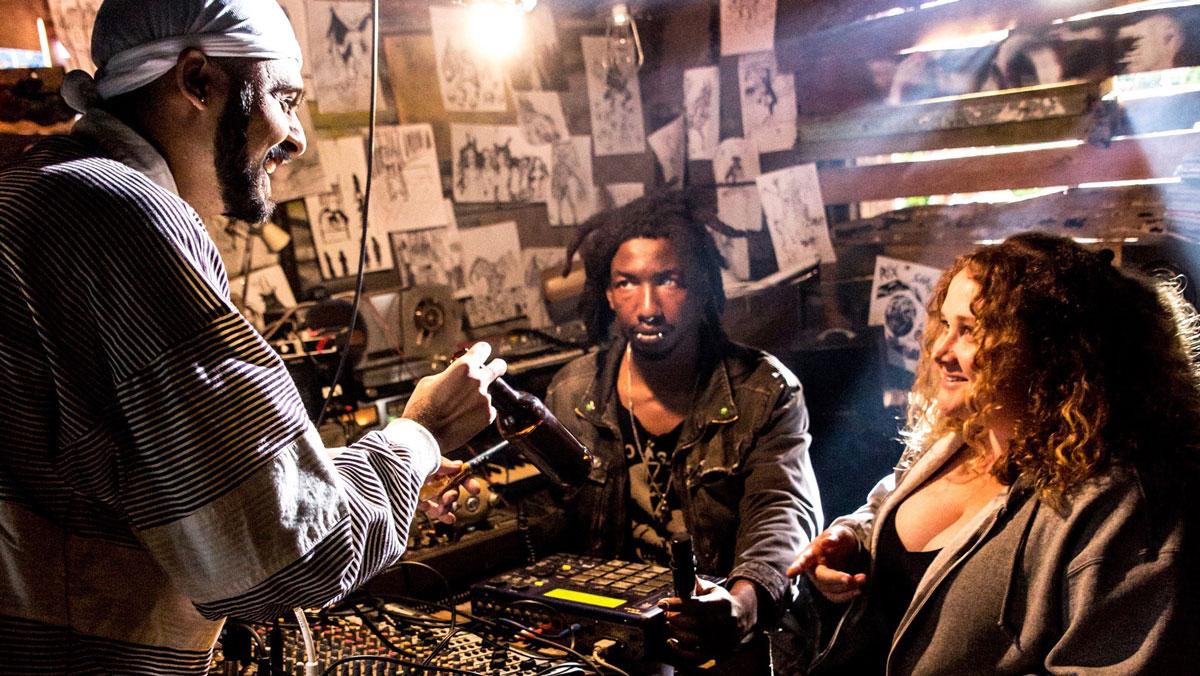 Stay Gold Features
“Patti Cake$” is the debut feature from writer, director and composer Geremy Jasper. The film follows Patricia Dombrowski as she tries to break into the music industry and attract the attention of her favorite rapper, O-Z. Stay Gold Features
By Tyler Obropta — Proof Reader
Published: September 6, 2017

The film opens on a black-and-white apocalyptic street, choral voices rising in the background. Transitioning to green-tinted fog and extreme closeups of grillz, the voices become more operatic, more intense. The rapper shrouded in fog introduces “Killa P,” but before we see the hyped-up hip-hop sensation, an alarm goes off. And Patricia Dombrowski (Danielle Macdonald), aka Killa P, is no more than a North Jersey kid with an alcoholic mother (Bridget Everett), an absent father and dreams of making it big.

“I’m stuck in dirty Jersey,” Patti raps, and she sees her music as her ticket out of there. It’s a humble underdog set-up, and her Rocky Balboa crew is rounded out by pharmacist-by-day, rapper-by-night Jheri (Siddharth Dhananjay), New Jersey anarchist Basterd (Mamoudou Athie) and the cigarette-sucking Nana (Cathy Moriarty), whose raspy register becomes the backdrop of their first recording.

Macdonald, an Australian-born actress who didn’t know how to rap before taking on this project, turns her character from a bystander into a fighter. Patti has a disastrous home life, but Macdonald takes that frustration and spits it back out in rap battles. She’s just a kid, but she’s fast and sharp, and she’s also a damn good rapper.

The lyrics, which writer/director Geremy Jasper also devised, flow with a funny, crackling fireworks energy, and Macdonald makes her rap sequences shine, particularly during her early recording sessions. “In a stretch limousine/ Gettin’ heads like guillotines,” she spits in one of the first songs.

Music runs in Patti’s family — her mother is a washed-up would-be pop star, a la Bonnie Tyler or Debbie Harry, whose career was ruined by her pregnancy. Barb still sings every night in the seedy bar where her daughter works, all the passion ringing in her voice until she has to vomit in the bathroom from one shot too many.

“Patti Cake$” delights in setting its stage with absurd characters and putting them into wacky situations. When Patti and Jheri pay their way into Pet Soundz Studio — a dingy, claustrophobic closet beneath a pet shop — or when Patti finally gets a chance to rap for her idol, local hip-hop celebrity O-Z (Sahr Ngaujah), the movie feels like it’s trying to be fun. But these situations, and many others, turn so quickly to seriousness that it’s hard to stay on the movie’s wavelength for very long.

No scene is played entirely straight, but the movie seems far from self-aware. Ridiculous sequences like those are immediately followed by emotional ones, such as a standout kitchen table conversation between mother and daughter, or a heartwarming hospital scene with the grandmother. (O-Z’s record company, Patti’s dream destination, is named Emerald City Records, too. Sometimes, it’s hard to tell how aware the film is of its own obviousness.)

But the absurdism undermines the film’s attempts at genuineness, and the more poignant moments don’t land. “Patti Cake$” comes alive in the music, and everything else seems secondary.

Cinematographer Federico Cesca emulates an energetic rap–style video for much of the film, bringing a gold-chain glamour to this started-from-the-bottom story. Patti drives around in a beaten-up old car lovingly named the Pattiwagon, but the way Cesca shoots it, it might as well have been a Lamborghini. Yet Cesca and Jasper don’t shy away from showing how seedy Patti’s home life and neighborhood are, either, as if to say, “Yeah, it’s hard out here for a pimp, but it’s hard out there for poor white girls from New Jersey, too, isn’t it?”

Despite its attempts to fight convention, the film’s narrative often dips into predictability, and it doesn’t take long to figure out how every character is going to play into Patti’s ultimate quest for fame. Just as it’s picking up steam, a late-in-the-game time jump throws off the group’s dynamic, made especially jarring when the film wastes no time in hurdling through major character beats to get to its endgame. The screenplay doesn’t do its characters any favors, either, as Patti, Barb and Basterd are the only ones given any attention. And though they are the most fleshed out, even they contradict themselves for the purposes of advancing the plot. Dhananjay is fine as Jheri — his rapping needs auto-tune to be palatable, but he’s better as Patti’s just-happy-to-be-here coach than he is his own character.

The film’s determined anti-classist, feminist narrative often steamrolls over these problems in the writing, but too many of the characters and situations feel disingenuous for “Patti Cake$” to be the empowering tribute to struggling artists it feels like it’s trying to be.

But this is Jasper’s debut feature and breakout star Macdonald’s first leading film role. Despite the tonal missteps, “Patti Cake$” marks a promising, confident start to the careers of these two talented young artists. May the Pattiwagon take them far.