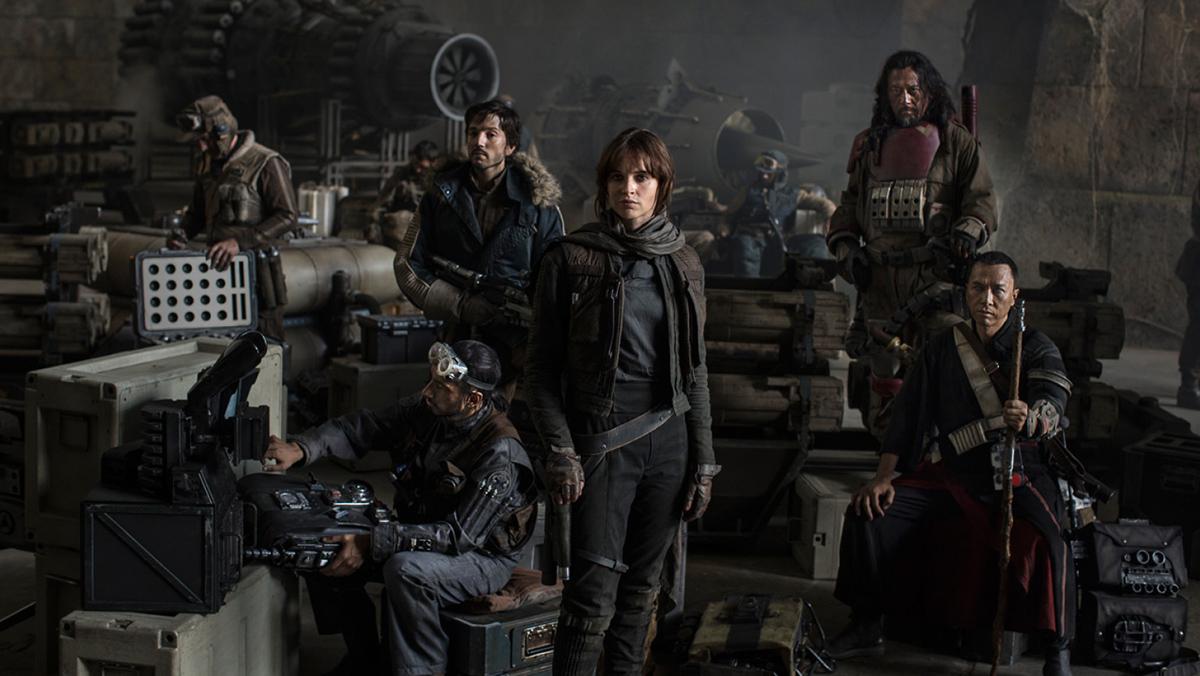 Rogue One: A Star Wars Story

A slightly longer time ago in a galaxy far, far away, a cast of Rebel fighters made their way through the sandstone streets of planet Jedha in a high-stakes race against the Galactic Empire to transmit a vital message to the Rebel Alliance. Thanks to Order 66 and the annihilation of the Jedi, these messengers are unknowns, pulled from the far reaches of the Star Wars universe — these aren’t the characters the audience knows and loves. But in this more well-received period of the “Star Wars” films, is that a disadvantage? Dark conflict and creative storytelling say otherwise in the science-fantasy action of “Rogue One: A Star Wars Story.”

“Rogue One” follows Jyn Erso (Felicity Jones), daughter of the Imperial research scientist Galen Erso (Mads Mikkelsen), on a quest across the galaxy to find her father and expose the critical weakness he built into the Empire’s planet-busting Death Star. She is aided on her adventure by her new partners-in-crime: the Rebel intelligence officer Cassian Andor (Diego Luna), who competes with Jyn for the most tragic backstory; the warrior Chirrut Îmwe (Donnie Yen), who is blind but ironically the most capable fighter — and the closest thing to a Jedi — in the entire film; and then K-2SO (Alan Tudyk), a reprogrammed Imperial droid and a combination of Marvin the Paranoid Android and the Terminator. Together with pilot Bodhi Rook (Riz Ahmed) and mercenary Baze Malbus (Jiang Wen), they form the titular squadron Rogue One.

“Rogue One” is, if nothing else, a chip off the old “Star Wars” block, which works both to its strengths and its weaknesses. It piggybacks off the new “Star Wars: The Force Awakens” formula with its own handful of nostalgia-pandering cameos and original trilogy references. Visually, it’s astonishing to see such new, rich worlds, like the tropics of Scarif or the arid twilight deserts of Jedha.

On occasion, and thanks to a lot of infighting, the tone of a good/evil dichotomy between the Rebellion and the Empire is blurred. This should equate to a more ambiguous and compelling conflict between and within the two opposing factions, which seldom happens in “Star Wars.” Unfortunately, despite the more complicated relationship dynamics, the characters aren’t worth getting invested in. “Rogue One” falls prey to the dreaded “too many characters, not enough character development” syndrome most commonly found in ensemble pictures. Case in point: The main antagonist, Orson Krennic (Ben Mendelsohn), tries to prove himself as a serious Imperial leader while Darth Vader and a CGI Grand Moff Tarkin snicker behind his back, stealing his precious limelight with their more lengthy character resumes.

The Death Star behaves like a malevolent, destructive planet come to life, more so than its previous incarnations, and its mere looming presence gives the film’s pacing a much-needed urgency boost. But aside from the Death Star, the whole Empire seems to be having an off-day and doesn’t quite feel as threatening as it did in previous entries in the series. Perhaps if the Empire sent better-armored AT-AT walkers or used their Star Destroyers for some other purpose than as cannon fodder, they’d have a fighting chance of stopping the Rebels before the Death Star arrives to bail the Empire out.

The film builds up to a final battle on Scarif, which combines the most iconic moments of all the major battles in Episodes IV, V and VI. From Rebel ships causing Star Destroyers to crash into one another, to AT-AT walkers duking it out with rebel fighters on the beach, to Darth Vader rampaging on “Pure Dark Side” setting, the climax easily trumps the final battle from “The Force Awakens.” Lucasfilm also threw in a bit of fan service by clearing up the decades-old elephant in the room of why the Rebels simply couldn’t transmit the Death Star plans by satellite during this fight.

“Rogue One” gives the “Star Wars” timeline a handful of new and creative adventurous moments, while shamelessly admitting it took out a loan from the rest of the series to get itself going. To its strength, the movie doesn’t have to carry the burden of the typical “Star Wars” characters that audiences all know and love, even if they aren’t as compelling as they could be. Thus, it isn’t afraid to defy the status quo. It joins “Revenge of the Sith” and “The Empire Strikes Back” by bringing a dark and uncertain tone to its conflict, and it thankfully doesn’t have a Jar Jar Binks, Ewok or “Attack of the Clones” love story equivalent.
Though the film may be living in the shadow of “The Force Awakens,” it is a satisfying “Star Wars” film nonetheless. The Force is strong with “Rogue One,” and it’s an entertaining space trip for audiences of all ages, all races and all species.