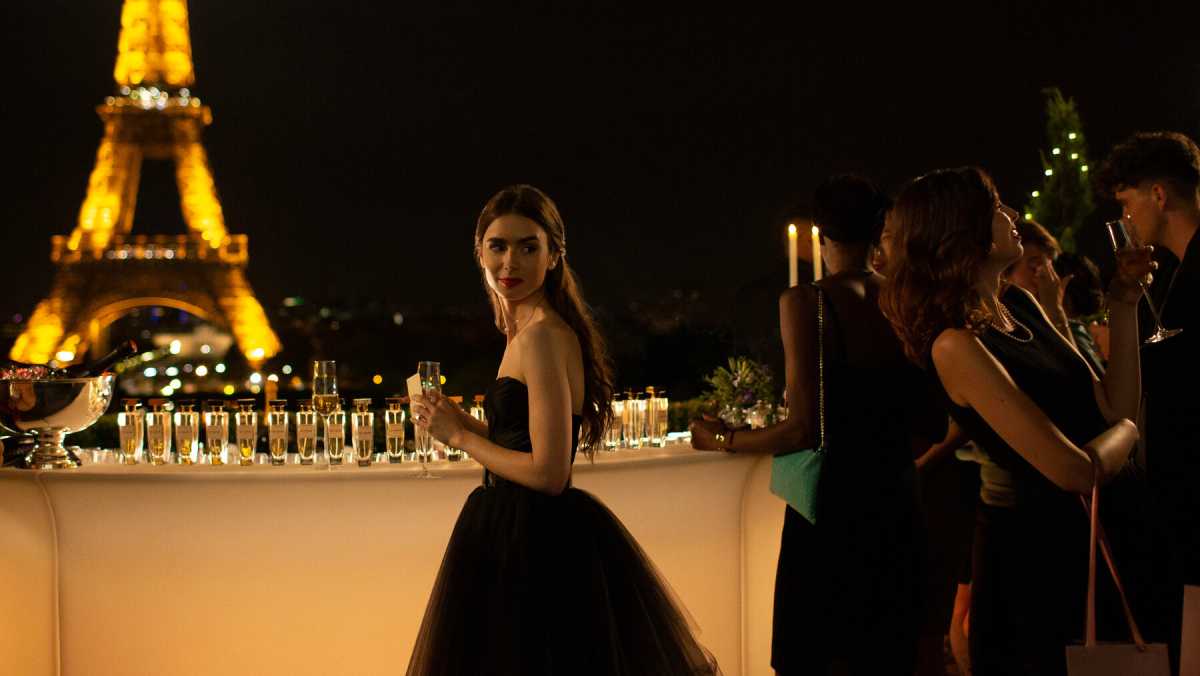 Courtesy of Netflix
“Emily in Paris” is a delightful Netflix series about an American woman making her way in Paris. However, its overly sweet tone and excessive French stereotypes could drive some viewers mad.
By Elijah de Castro — Staff Writer
Published: October 12, 2020

How viewers respond to “Emily in Paris” will be entirely dependent on who they are. If they have a soft spot for adorkable, on-the-nose rom-com silliness, “Emily in Paris” could be a piece of Parisian escapism they desperately need. For other viewers, the show will likely be three hours of overly sweetened, eye-roll–worthy absurdity.

“Emily in Paris” is “Sex and the City” showrunner Darren Star’s new Netflix show. It follows Emily (Lily Collins), a hardworking social media whiz from Chicago who suddenly moves to Paris for a year when a job opportunity is dumped on her. Of course, she speaks no French beyond poorly accented “bonjour’s” and “s’il vous plait’s.” She also has thick Midwestern sensibilities that put her at odds with her French colleagues.

There is no getting around it. “Emily in Paris” is ridiculous. The show is pumped full of every possible stereotype of Paris — walks along the Seine River, heavy smoking, beret-wearing, endless bottles of wine, baguettes galore and dog poop everywhere. The characters themselves are also caricatures of every French stereotype viewers have learned over the years, including the mean boss, the sexy chef and the pretentious philosophy professor. The cliches are endless, so much so that there have been numerous articles published offering French people’s reactions to the show’s stereotypes of their culture.

The show wears these cliches on its sleeves, leaving viewers two options: Love it or leave it.

When Emily arrives in Paris, she begins her work at Savoir, a French marketing firm where everyone shows up late to work and dresses like the cover of a Vogue magazine. Emily’s boss, Sylvie (Philippine Leroy-Beaulieu), is a coldhearted French woman who seems to dislike Emily simply because of her strong American accent and puppylike smile.

Her downstairs neighbor and running love interest is Gabriel (Lucas Bravo), an uncomfortably attractive young chef who, of course, cooks for the straight-out-of-“Ratatouille” restaurant across the street. The show follows her personal and work lives across 10 episodes as she mingles with numerous French guys, befriends a fellow English speaker and organizes a luxury fashion show.

But somehow, despite all of the cheese, hackneyed relationships and childish writing, the show works. It takes a few episodes to get into it, but the show’s unabashed sweetness is anchored by Collins’ leading performance. One could compare Collins’ performance to Melissa Benoist as Supergirl — overacted and cringeworthy but at heart, lovable and sweet. It’s not great, maybe not even good, but her overwhelming charm smooths out the goofiness of the story. Collins’ optimistic, happy-go-lucky attitude juxtaposed with the villainous nature of her boss makes for some genuinely funny but surely unrealistic moments.

There is never a moment of boredom either. When episodes aren’t following Emily as she ogles the beauty of Paris with her Instagram followers, they are offering viewers some absurd piece of drama about Emily and her latest Parisian lover.

So is “Emily in Paris” a good show? Who knows. On paper it’s terrible, but the hypersaturation of French stereotypes and Collins’ lovable performance make for a severely entertaining piece of trashy escapism. It’s for a niche audience, one that will fall for all the cliches, kooky pieces of dialogue and pain au chocolates. Most audience members likely won’t give themselves up to it, but the ones who do might find themselves longing to visit the city of love.

Authors capitalize off of famous book series with poor sequels