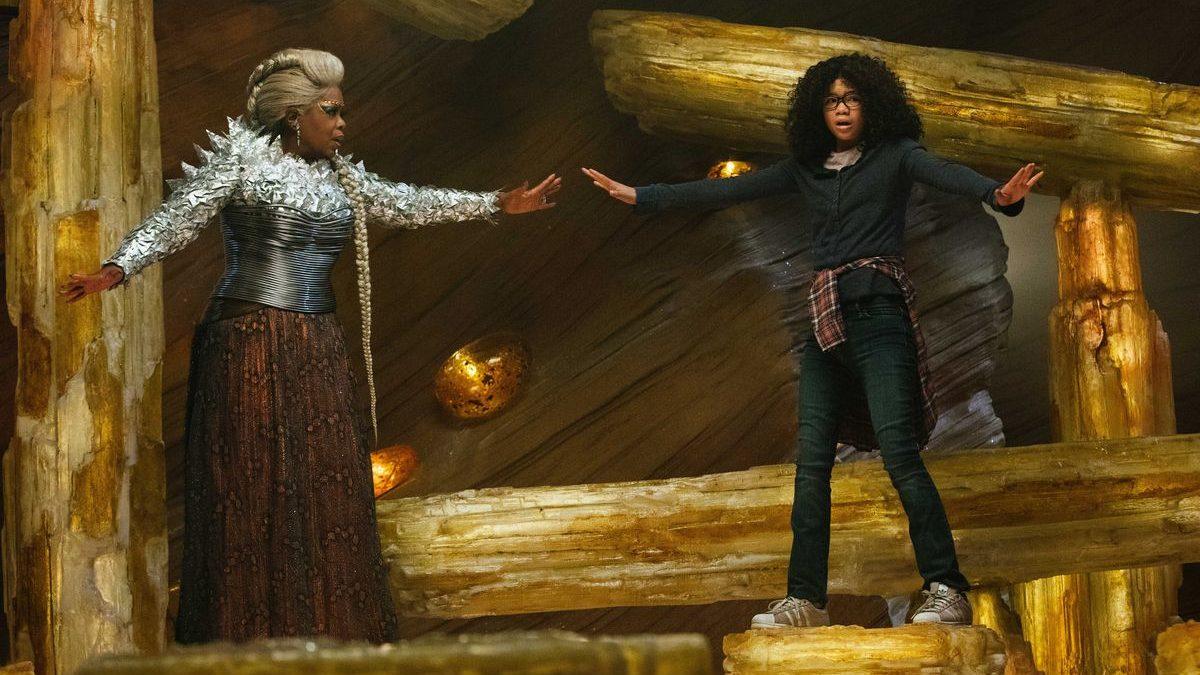 Walt Disney Pictures
Directed by Ava DuVernay, "A Wrinkle in Time" is the most recent film adaptation of the 1962 science fiction fantasy novel of the same name.
By Antonio Ferme — Staff Writer
Published: March 27, 2018

A Wrinkle in Time

“A Wrinkle in Time” opens with a beautiful shot of colorful clouds moving across a big blue sky. The scene is visually stunning and sets up a world filled to the brim with imagination, but just like the entire film, it offers no substance. This lack of substance is what separates the film from Disney’s decade-spanning collection of movies, making it a forgettable film adaptation.

“A Wrinkle in Time” is based on the 1962 science fantasy novel written by Madeleine L’Engle. The film is directed by Ava DuVernay, who has attracted attention for her smaller-budget films such as “Selma” and “13th.” After directing “A Wrinkle in Time,” DuVernay has become the first African-American woman to direct a film with a budget that exceeds $100 million. While the cultural significance of this achievement is relevant, this movie is still, unfortunately, a mediocre blockbuster. At the end of the day, “A Wrinkle in Time” is a film that tells an empowering story in a convoluted way.

The story revolves around a young girl named Meg Murray (Storm Reid) and her younger, highly intelligent brother Charles Wallace (Deric McCabe). They are searching for their father, Dr. Alex Murray (Chris Pine), who had been presumed to be dead for five years. In reality, Alex traveled to another planet using tesseract, a type of space travel he was researching. Meg, Charles Wallace and their friend Calvin (Levi Miller) go on a wild adventure to save Alex from the IT, a purely evil entity plotting to take over the universe. They are guided by three wise, astral travelers known as Mrs. Whatsit (Reese Witherspoon), Mrs. Who (Mindy Kaling) and Mrs. Which (Oprah Winfrey) who help the young children on their mission.

These three unexplainable, larger-than-life protectors are briefly introduced during the film, and they are not expanded upon whatsoever. The film expects the viewer to come to the conclusion that the three travelers are knowledgeable and almost god-like, but they are never truly fleshed out. They are colorfully dressed up and have quirky and wise personalities, but these supposedly ageless characters have no true depth. Their backstories and even the possibility of their existence is never made clear, so it’s hard to become invested in them. The only thing saving these characters are the talented A-list actresses portraying them.

The human characters are slightly more developed. The main standout is the young Charles Wallace, who gives off a charm that is both adorable and amiable. Meg and Calvin, on the other hand, act more like adults than actual children. On their adventure, they treat every interaction like a mature and well-spoken adult would. This works for Charles Wallace’s character, but Meg and Calvin end up coming off as wooden, thanks to the flawed writing.

The entire world that DuVernay introduces passes by the audience. Right when the viewer is given the opportunity to become engaged, the story moves on to a new mysterious location while continuing to dump useless exposition. When the gang travels to a distant planet called Uriel, the viewer only gets a quick glance at the visually stunning landscape. Afterward, Mrs. Whatsit transforms into a green creature that flies into the atmosphere. The most painful part is that this story has the potential to be magical, but the film takes the safer route and tells a simplistic story. The film should have spent more time developing elements of the lore it introduced, but instead, it falls flat on its face.

In the end, “A Wrinkle in Time” is difficult to truly understand at times without being familiar with the source material, due to the lack of development of the mythology and characters. At best, the viewer can leave with some thought-provoking messages about individuality and the power of good versus evil to discuss on the car ride back home. However, in a couple of years, people won’t be talking about “A Wrinkle in Time,” as it is simply a middle-ground children’s movie that failed to live up to its expectations.