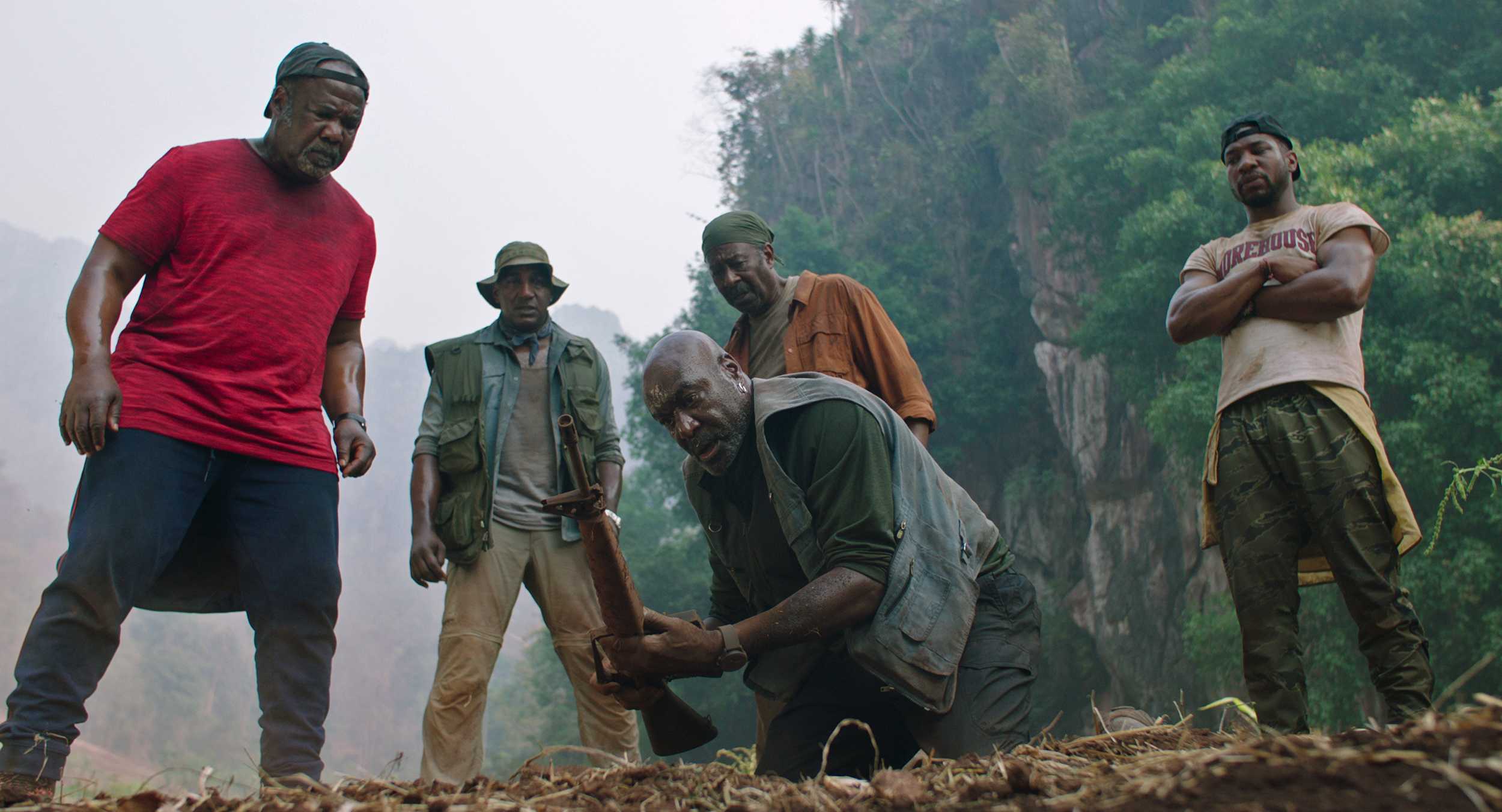 40 Acres and a Mule Filmworks

For Spike Lee’s striking “Da 5 Bloods,” history is damning but uniting. When four Black Vietnam War veterans join forces to search for the bones of their fallen squad leader, Stormin’ Norman (Chadwick Boseman), and a pile of gold, they confront the territory they fought on and yearslong prejudices along the way.

Decades after the exceptional “Do The Right Thing” but only approximately a year since his most recent Academy Award win for “BlacKkKlansman,” Lee’s screenplay both honors and contends with the historical past. This time, he is aided by writers Danny Bilson, Paul De Meo and Kevin Willmott. As the soldiers — Paul (Delroy Lindo), Otis (Clarke Peters), Eddie (Norm Lewis), and Melvin (Isiah Whitlock Jr.) — embark on a hunt through the jungle, the Vietnam War, both in flashbacks and as a memory, acts as a character right alongside them. Lee bookends “Da 5 Bloods” with real footage of Muhammad Ali and Martin Luther King Jr., two activists who opposed the war. By doing so, he ponders the same question these two men asked: Why were Black people forced to fight a war for a country that did not treat them as whole citizens?

The Bloods, as the soldiers call themselves, regroup in Vietnam years after the war, wearing Hawaiian print shirts, drinking fruity drinks and recalling their times as soldiers. Their friendship is steadfast and cheeky, a brotherhood that burns brilliantly the whole film. They were part of the 1st Infantry Division the last time they set foot in Ho Chi Minh City. But soon, old tensions rise to the surface. Paul is keen to remember their past, and the others are quickly reminded of it too: The Bloods once participated in a war that killed Vietnamese citizens, and in turn the Viet Cong fought back. This is a bitter fact not quickly forgotten by either side.

The film sometimes feels like a documentary — a fictional tale strung together by facts, pictures and videos that exist outside the story’s world. Focused shots are often interspersed with grainy, handheld frames that create a rawness also found in the film’s flashback battle scenes. Lee ups the saturation and changes the aspect ratio, two additions that indicate a shift in time. The fuzzy green trees, sparked with intensity by Newton Thomas Sigel’s cinematography, contrast with the main characters’ Black bodies, a picture audiences rarely see in war-centered films.

Matching excellent filmmaking with the intensity of a magnificent score has long been a strong suit of Lee’s. But Terence Blanchard, whose groovy, haunting music gave “BlacKkKlansman” an Oscar-nominated score, fails to eliminate the blind heroism that usually plagues wartime-focused films. The score itself is not poorly executed, and Lee’s characters are not heroes. But by design, scores can sensationalize a scene that may instead require silence, or limited music, to appreciate. Using such strong orchestral music as a backdrop to the characters’ journey, one that is rooted in trauma and pain, is inherently damaging.

As Paul, Lindo lugs his character’s grief and guilt about Norman’s death alongside his faded MAGA hat. He lashes out in prideful, angry bursts before he yields to mourning. In a more careless film, Paul’s anguish might have been excused, or worse, gruesomely exalted to force tears from the audience’s eyes. But Paul is more complex under Lindo’s performance, often at odds with his fellow Bloods who criticize his domineering superiority complex. The way he wears a faded MAGA hat like a crown and shouts racial slurs at Vietnamese people the group encounters is thankfully examined under Lee’s careful direction, which shines when he writes in the very people he criticizes.

Beyond his affinity to Norman, Paul’s tyranny is often at odds with his son, David (Jonathan Majors). Audiences are introduced to their already shaky relationship when Paul discovers David followed the group to Vietnam. It’s easy to dismiss David’s choice as an appeal to help find Norman and the gold with his father, who at first violently rejects the offer. But his son’s presence unwittingly softens Paul’s demeanor. His subtle love is easy to ignore, a tactic that perhaps places audiences in David’s own shoes.

But like Paul’s chaotic dynamism, David’s character is bolstered by Majors’ phenomenal acting. Majors was quiet but electric when he held the role of Montgomery Allen in “The Last Black Man in San Francisco.” As David, Majors is charismatic and less melancholy, but his same tenderness barrels through his scenes, with or without his father beside him. While “The Last Black Man in San Francisco” was snubbed by the Academy of Motion Picture Arts and Sciences in 2019, Lee’s elegiac tale should garner the young actor and his fatherly counterpart some deserved attention.

Fists together, the Bloods take control of their personal pursuit, even when outside forces threaten to tear it down. It’s a sentiment reminiscent of the Black Lives Matter protests happening right now, as people around the country demand justice for Black people like George Floyd and Breonna Taylor who police officers have killed. It feels real and immediate, when modernity seeps into the screen — when audiences are reminded that Black lives mattered back then, too.