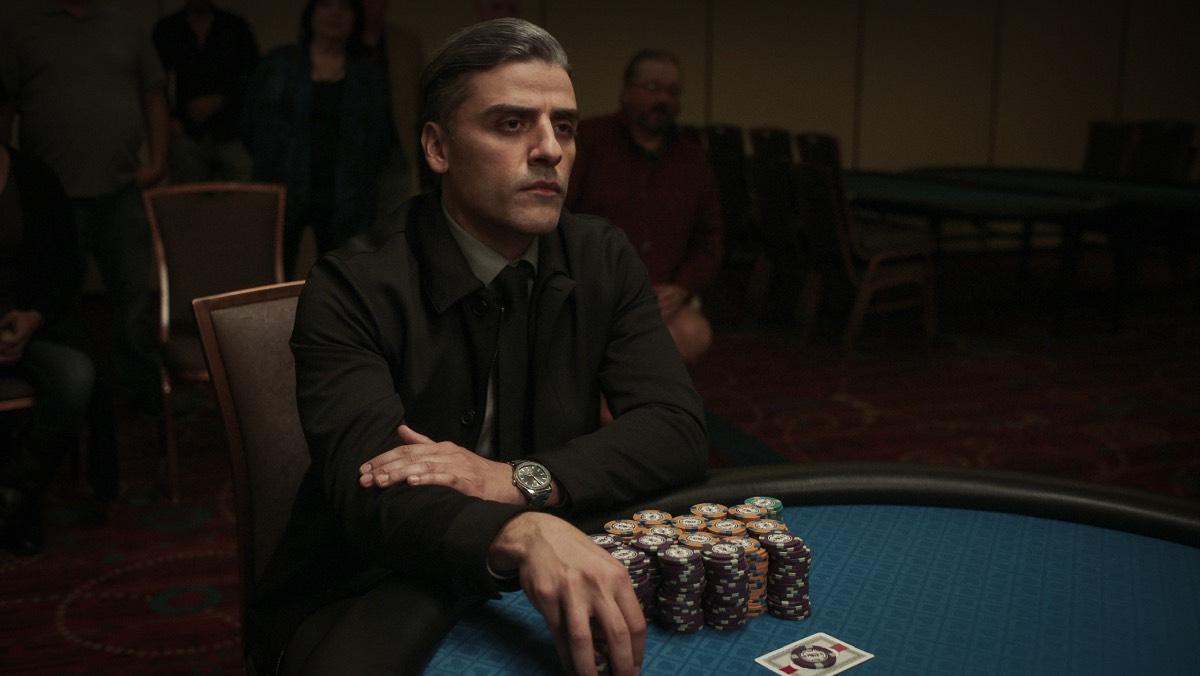 Courtesy of Focus Features
The latest Paul Schrader film is a character-driven story that brings out one of the best performances from Oscar Isaac.
By Ryan Smith — Contributing Writer
Published: September 23, 2021

Paul Schrader’s newest film, “The Card Counter,” may seem like a movie about gambling on the surface, but it is truly the story of a broken man desperately clambering to atone for his sins. Though the experimental filmmaking, storytelling techniques and heavy themes are best suited for film buffs, it is among Schrader’s best work.

Oscar Isaac trades in his X-wing for a deck of cards, playing the titular card counter, William “Will” Tell. Tell is an ex-military interrogator who uses the card counting skills he learned in prison to travel the poker circuit anonymously. On the circuit, Will meets Cirk (Tye Sheridan), a young man on the path to revenge against Tell’s former military major (Willem Dafoe). Will decides to interrupt his ronin lifestyle to set Cirk on a new path, seeing a chance at redemption through his relationship with Cirk.

Paul Schrader is at his best when diving into the souls of tormented men haunted by their past, like his films “Taxi Driver” and “First Reformed.” “The Card Counter” is another excellent example of Schrader’s trademark story. With the film he asks, “Is redemption possible?” Schrader answers the question by mixing the world of high-stakes poker with Tell’s desire for salvation, putting Oscar Isaac in a position to give one of the finest performances of his career.

While every performance in the film is a standout in some way, no one outshines Isaac. As William Tell, Isaac travels between suave poker player, ex-military interrogator imprisoned by his demons and man desperate for deliverance from his past. Tell often interjects into the narrative through voice-over. He recalls his days in prison or explains the rules of poker. These interjections are strengthened by Isaac’s dismally consistent tone — he is the best casting for one of Schrader’s most tortured characters.

Tiffany Haddish gives the most surprising performance in this film as La Linda, a professional gambling manager and friend of Tell’s. Haddish’s comedic roots are apparent through the film as she brings most, if not all of the few laughs in the film. Her performance perfectly contrasts Isaac’s and their chemistry only grows more fierce as the film continues. Meanwhile, Dafoe is on screen for less than five minutes, but manages to craft an antagonist worthy of hate. The weakest performance comes from Sheridan as Cirk, whose delivery is hit-or-miss for most of the film.

Schrader takes a unique and unsystematic approach to this film, structuring it like a game of poker. Schrader acts as the card dealer for the film’s game of poker, laying out the answers to the story at a deliberately slow pace. This pacing builds tension over the film, and while the film is slow, there are only a few moments where it drags. Once all the cards are on the table for the film’s third act, it results in some of the best moments the film has to offer, making every slow moment worth it.

Schrader and Alexander Dynan, his director of photography, tightly frame shots and create a grim color tone to compliment the film’s deliberately slow pacing. Of everything in the film, the most well-shot scenes are when William Tell thinks back to his time as a military interrogator. Dynan used an ultra-wide virtual reality lens, capturing a circular image that allows the viewers to see every inch of the prison where Tell spent eight years.

Schrader tells the story of yet another man on the search for salvation from his past. With an excellent script, outstanding visuals from Dynan and Oscar-worthy performances from Isaac and Haddish, “The Card Counter” will certainly see a plethora of nominations this awards season.