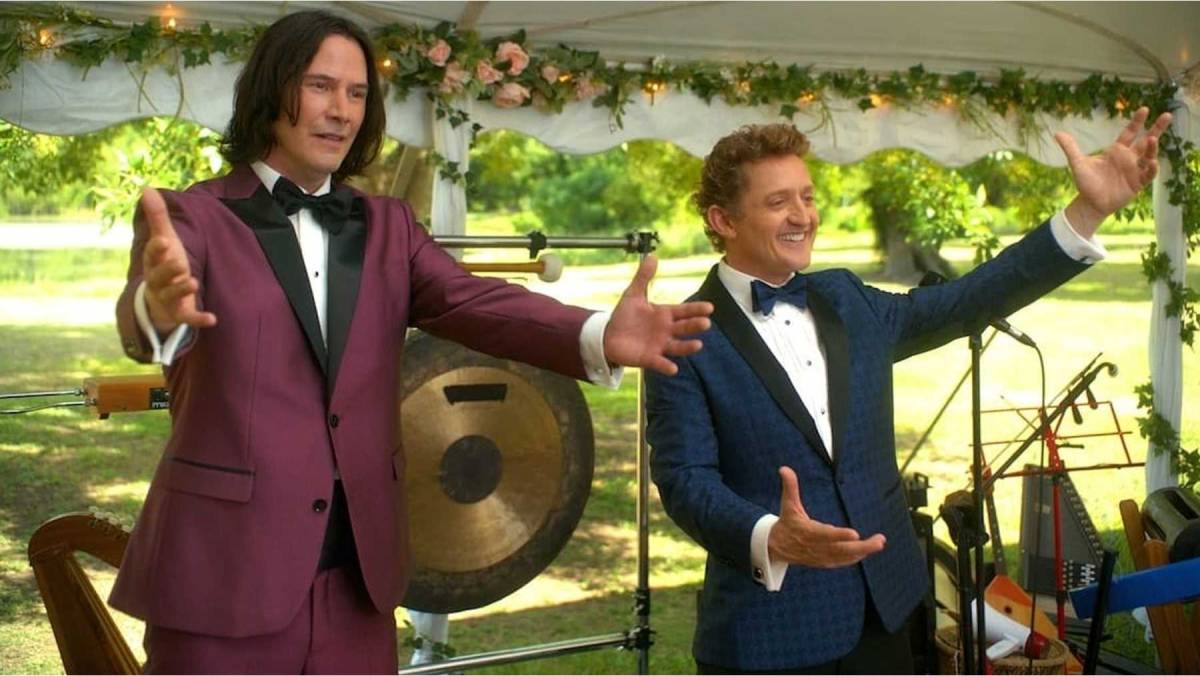 Courtesy of Orion Pictures
The third installment in the Bill & Ted saga, “Bill & Ted Face the Music,” is full of feel-good comedy and callbacks to the original movie. Its fun tone and message of togetherness are exactly what viewers need right now.
By Dariene Seifert — Senior Writer
Published: September 11, 2020

As 2020 continues to be a harrowing time, the heart and humor of “Bill & Ted Face the Music” is definitely needed. Nearly 30 years after the second film, the dynamic duo returns for another entertaining time traveling adventure.

William “Bill” S. Preston, Esq. (Alex Winter) and Theodore “Ted” Logan (Keanu Reeves) still struggle to write the song that will garner world peace, a quest that they have been on since the second movie. When visiting the future, they learn they have less than 24 hours to write that song or humanity and the universe will fall apart. In an effort to help their dads, Bill and Ted’s daughters, Thea Preston (Samara Weaving) and Billie Logan (Brigette Lundy-Paine), decide to form a band of historical music figures.

“Bill & Ted Face the Music” emulates the first film more than the more surreal second one, but it still has its own distinctive charm. Thea and Billie’s journey in searching for historic individuals is reminiscent of the young Bill and Ted from their original adventure. There is also an admirable tribute to George Carlin, who died in 2008 and played Rufus, Bill and Ted’s mentor, in the previous two films.

Despite it being so long since Reeves and Winter played their iconic characters, they naturally reprise their roles. Their chemistry is strong and endearing, and the comedy in the film rarely falls flat. Written by Chris Matheson and Ed Solomon, the script and the actors do an excellent job of delivering on hilarity. Some of the funniest lines come from Dennis (Anthony Carrigan), an insecure robot, and Death (William Sadler). There are also a couple of humorous scenes with Bill and Ted confronting their future selves.

The movie has wholesome themes of family and friendship. The relationship among Ted, Bill and their daughters is convincing and sweet. When Bill and Ted’s performance at a wedding flops in the film’s opening scene, Billie and Thea still praise them. The daughters also share a great friendship and a common love of music. Knowing that Thea and Billie are miniature versions of their fathers is quite bodacious and helps to introduce the new generation to Bill and Ted.

There is also a subplot of Bill and Ted trying to fix their marriages with their wives, Princess Joanna (Jayma Mays) and Princess Elizabeth (Erinn Hayes). The actors do an exceptional job of showing a balance between seriousness and humor. Bill and Ted are naive to the fact that their 25–year dedication to writing the song has put a strain on their relationships. When they realize it has, instead of pushing their spouses to the side, the two are determined to make things right. This adds a new layer of depth to the characters.

Of course, music plays an important part in the film. It is amusing to witness diverse sounds throughout history, like the jazz of the 1920s or the choral tunes of the classical era, coming together as Billie and Thea time travel. Listening to Jimi Hendrix (DazMann Still) jamming out on his guitar and watching Billie and Thea’s reactions to one of their music idols are exciting to watch.

The story never drags. The audience can feel the suspense as Bill and Ted race against the clock to save everyone and everything. The variations in set designs from 1960s London to the glossy future show off fun and detailed scenery. Hell especially stands out with its fiery landscape and flying demons as the heroes try to navigate it.

There are some minor flaws. While most of the band members Billie and Thea find have fascinating personalities, a couple lack distinguishing traits. The rushed pacing toward the end of the film meant that some of the historical figures do not receive much character development. This can be forgiven because there are many characters in the film. The ending, while enjoyable, is somewhat abrupt, but there is a neat, little post-credits scene.

All in all, “Bill & Ted Face the Music” is comedically captivating. Given the current times, the film’s morals about love and support are compelling, as well as a necessary reminder. Right now, the world needs a good laugh and good music. The film welcomes new fans and pays respect to the old ones. As always, its famous motto continues to ring true: “Be excellent to each other, and party on dudes!”