Review: ‘Wonderstruck’ is anything but wonderful 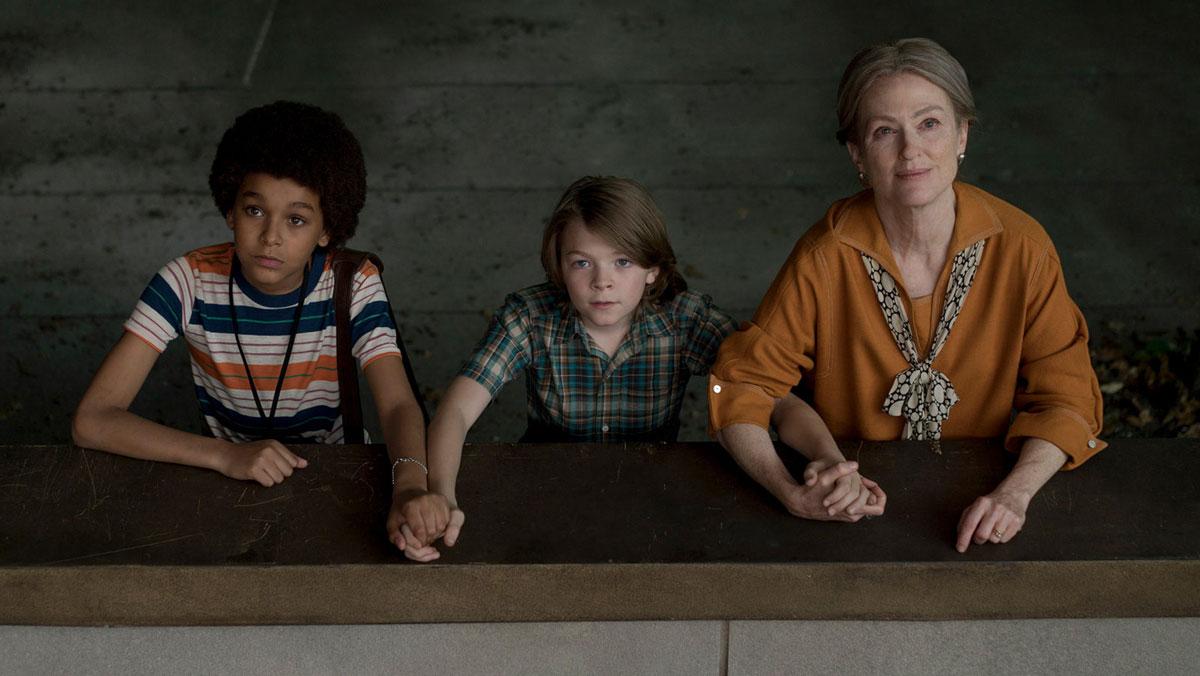 Amazon Studios
“Wonderstruck” is based on the novel by Brian Selznick and tells a dual narrative that eventually converges. One half of the story is dedicated to Rose (Millicent Simmonds), a deaf girl who runs away from her home to visit her mother, Lillian Mayhew (Julian Moore) in New York City. The other half of “Wonderstruck” follows Ben (Oakes Fegley), who is stricken deaf in an accident.
By Tyler Obropta — Proofreader
Published: December 5, 2017

Rarely has whimsy been so bland as in Todd Haynes’ “Wonderstruck.”

The film’s interests are cleaved by its dual narrative, half-following a 12-year–old boy, Ben (Oakes Fegley), in 1977 Minnesota and half-following Rose (Millicent Simmonds), a deaf girl in 1927 Hoboken, New Jersey. Deafness unites the unlikely pair — while Rose was born with it, Ben’s sprung from an accident involving a telephone, childish curiosity and an ill-timed bolt of lightning.

The accident sends him to the hospital, but Ben has other plans. As soon as his aunt (Amy Hargreaves) leaves the room, Ben flees, hopping on a bus to New York City. Ben, who never knew his father, thinks he’ll find him at a bookstore there named Kincaid’s. Many years in the past, Rose similarly escapes a stifling home life. She crosses the Hudson River on a ferry to reconnect with her mother, the silent film star Lillian Mayhew (Julianne Moore).

Rose’s story is presented in black and white and without sound as an uneven, halfhearted send-up of late-era silent films. The style indulges in eccentricity and even threatens humor — the jokes are nearly out of place, as Haynes films are as renowned for their comedy as French movies are for their straightforwardness.

Through this style, the film finds many of its best moments in Rose’s story. When she finally meets Moore’s Mayhew during one of the actress’ rehearsals, Moore exudes motherly warmth, and Simmonds a precocious charm. And later, when Rose wanders the American Museum of Natural History, her evasion of an irksome security guard carries a little bit of prepubescent anarchy with it. The silence in these scenes is endearing, and Carter Burwell’s score appropriately reflects the cuteness with harps and brass. And Simmonds — who must take some of her own experience to her character, as she herself is deaf — enlivens all of her scenes with her exacting glares. Her eyes constitute about 80 percent of her performance.

Ben mostly spends his story connecting with Jamie (Jaden Michael) in that same museum. It’s a subplot that spends 40 minutes spinning its wheels and making very little sense. Brian Selznick, author of both the screenplay and the novel it’s based on, tries to craft several fun sequences between the children, but the scenes are marred by uninventive direction and cinematography. An early chase in the museum should be amusing and breezy, but it instead comprises eight or nine static, eye-level shots of the two kids running back and forth. It’s impossible to get involved in the story when every shot is so predictable and flat.

Haynes, who has always loved period pieces, from his debut “Poison” to 2015’s “Carol,” clearly revels in the ’20s and ’70s settings. Oldsmobiles purr across the city streets in Rose’s world, and the vintage outfits in Ben’s New York City are downright groovy.

Haynes also indulges in cutaways. Wherever Ben and Rose go, Haynes’s camera finds children playing in the street or some strangers joking on stone steps. In a way, “Wonderstruck” unfolds like two vaguely analogous collages of everyday life in the city.

There’s a spectacle intended with the black-and-white cinematography and the grand ruminations on childhood, friendship and family. When the film cuts randomly between each story and clumsily delivers its narrative, the spectacle suffers. Simmonds steals the show, and Fegley shows some promise as Ben. But it doesn’t matter because Selznick’s script only ever asks them to gape in awe at one thing after another with the intermittent conversation thrown in to break up the monotony.

Haynes and Selznick undoubtedly set out to tell a story about children for children, but nobody said it had to be bland. The most interesting part of the film is the pseudo-romance it sets up between Ben and Rose, despite the children’s journeys occupying different moments in time.

Yet in its preoccupation with the wide-eyed wonders of self-discovery, “Wonderstruck” sorely misses the sleek sexiness and provocation of Haynes’s earlier efforts. Everything here feels too sterile and too safe.

And by the time the credits roll to a children’s choir’s rendition of David Bowie’s “Space Oddity,” it’s clear that “Wonderstruck” is merely hollow art. Like the wolf and caribou dioramas the children spend so much time gawking at in the Museum of Natural History, “Wonderstruck” has depth and craftsmanship, but there’s something missing, something separating it from reality.