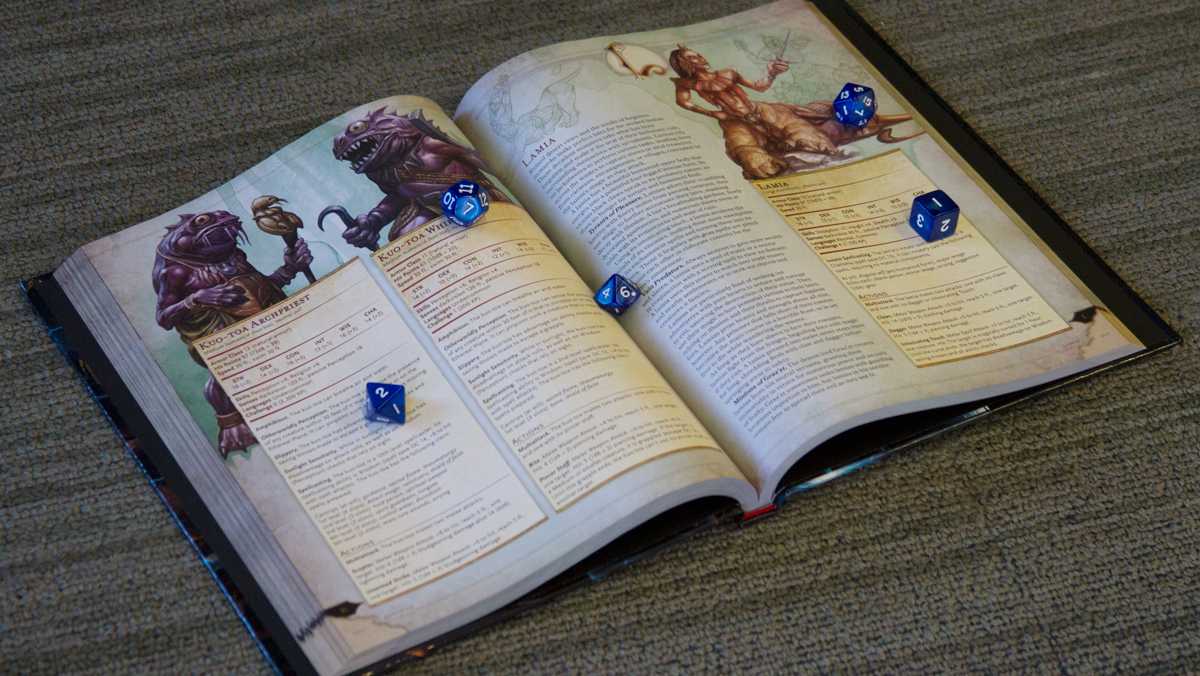 Maxine Hansford/The Ithacan
Pen and paper role-playing games are a popular way for groups of people to gather together and tell stories in their favorite fantasy or science fiction worlds. The IC RPG club was Fall 2017, by sophomore Logan Trembow and junior Isaak Hill.
By Silas White — Senior Writer
Published: November 29, 2017

A thief prowls in the darkened alleyways of a fantasy city. Government agents lose their sanity upon discovering the eldritch secrets of the universe. A heist goes wrong when the getaway driver shows up drunk. A character’s life hangs in the balance, her fate decided by the roll of a 20-sided dice. In tabletop role-playing games, a player’s imagination is the limit.

IC Role-Playing Game Club was started at the beginning of the fall semester by sophomore Logan Trembow and junior Isaak Hill as a way to bring people together to play tabletop RPG games.

The club is open to both experienced players and newcomers.

“I like to run games oriented to new players,” Hill said. “It’s always fun to teach new players the rules, because usually, they don’t have preconceptions about other systems. I feel like people that aren’t familiar with the rules are more creative with what they do in the game.”

In tabletop role-playing games, which are also referred to as pen-and-paper role-playing games, players describe their characters’ actions through speech. The games can be thought of as a form of group storytelling, Hill said. One player, typically referred to as the game master, acts as the storyteller and referee. The rest of the players control characters within the world the game master describes, and usually have to accomplish an objective, such as defeating a villain or investigating a crime.

Participants choose their actions in the game based on the character they are playing, and actions succeed or fail based on established rules, dice rolls or at the game master’s discretion. Tabletop RPGs in their most recognizable form started with Dungeons and Dragons in 1974. Created by Gary Gygax and Dave Arneson, Dungeons and Dragons allows players to control characters of different races and skillsets in a fantasy setting. Recently, the game appeared in the Netflix original series “Stranger Things.”

Trembow said he was surprised a similar club did not exist already, so he and Hill decided to start their own. Since the club’s conception, interest has been relatively high, with 63 members on the club’s Facebook page, and about 20 people attending regular sessions and the club’s Thursday meetings. Trembow said that curiosity in tabletop games has been on the rise the past few years, partly due to the Dungeons and Dragons web-series “Critical Role.”

Tabletop RPGs are a social activity by nature, Trembow said, so he was looking for more people to play with. Rather than have one large game, the club plays as a group. The club uses Facebook to set up several small games that players sign up for individually. While some campaigns feature larger stories that unfold over several sessions, others are only one session long. Trembow said shorter games are offered because it’s hard for college students to find time to commit to weekly games.

“The basic problem of college students is that we’re really busy, and we’re really busy in a super annoying way, which is we’re really busy spread out throughout the entire week,” Trembow said. “It’s really hard to find a good four– or five–hour chunk of time to steal someone’s afternoon away, and it’s even harder to find a group of people open for the same hours on the same day.”

While Dungeons and Dragons remains popular within the club, other games the club plays include “Delta Green,” a game set in a modern world that takes inspiration from the H.P. Lovecraft mythos, “Fiasco,” a game-master-less game designed to simulate a heist gone wrong, and “Paranoia,” a game where players’ characters live in an underground dystopia ruled by a computer. Hill said that one of the advantages to tabletop games over video games is group storytelling and freedom of expression.

“In tabletop games, you can really have a face-to-face connection with people,” Hill said. “They allow for really great storytelling, which is neat. I’ve always had a problem with the term RPG when it comes to video games, because to me a role-playing game is a game where you can do literally anything. In a video game, you’re limited by the game’s programming.”

Freshman Elizabeth Zenteno joined IC RPG Club at the organization fair. She said that she had an interest in RPGs in high school, but did not know anyone she could play with. Zenteno said she enjoys the social element of tabletop RPGs.

“If you don’t want to be too serious, you don’t have to be,” she said. “I’ve always liked fantasy stuff, so that’s another thing.”

Zenteno said her favorite moment in a recent campaign was foiling her game master’s plans by instantly killing a difficult enemy. In the game, Zenteno had rolled a 20 on the 20-sided die, which caused her character to score an extra deadly attack.

“There’s this one campaign I’m doing where I play a Halfling assassin … which basically means I’m overpowered,” she said. “There was this moment where we were having trouble finding a switch to get to the next room, and meanwhile we were fighting these people that were supposed to be difficult and take more time, but me and two other people killed them on our first move.”

The best part of the club, Trembow said, is telling a story together with friends.

“Everyone sits down at a table and writes a story together, and the players have real influence on the story’s outcome,” he said. “The fact that there are many players working together, and it’s your shared vision, is what’s interesting. Also, I don’t know, it’s a good way to get out of the house, get some pizza and chill out.”